Biden makes it clear that #KillTheCliff & #UpTheSubs are the START of his healthcare vision, not the end. 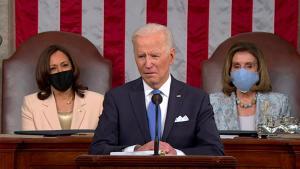 As expected, the healthcare section of President Biden's first address to a joint session of Congress (technically not a State of the Union, but close enough) included a call for making the subsidies expanded under the American Rescue Plan permanent as part of the American Families Plan.

Also as expected, he did not call for other major healthcare reform priorities to be baked into the #AmFamPlan.

He did, however, spend significant time calling for those other priorities to be passed separately from the AFP...considerably more than he did on the subsidies themselves.

Before I get into the proposed healthcare policies: Early on in the speech, Biden gave a shout-out to his Administration for the success of the current, ongoing COVID Special Enrollment Period:

We’re also providing rental assistance — you all know this, but the American people, I want to make sure they understand. Keeping people from being evicted from their homes. Providing loans to small businesses that reopen and keep their employees on the job. During these hundred days, an additional 800,000 Americans enrolled in the Affordable Care Act when I established a special sign-up period to do that — 800,000 in that period. We’re making one of the largest one-time-ever investments, ever, in improving health care for veterans. Critical investments to address the opioid crisis. And maybe most importantly, thanks to the American Rescue Plan, we’re on track to cut child poverty in America in half this year.

The only enrollment report from CMS put the number of Americans who've selected Qualified Health Plans (QHPs) via the COVID SEP at 528,000 via HealthCare.Gov (which hosts 36 states). However, that only included those who enrolled from 2/15 - 3/31. If you extrapolate that out to include all 50 states + DC, I figured it was likely closer to 710,000 nationally as of the end of March.

Since then, there've only been a few spotty data reports from a handful of the state exchanges; between those and what I assumed was an enrollment spike thanks to the expanded subsidies going live on April 1st, I figured national SEP enrollment might have broken 1.0 million as of 4/14. If so, around 740,000 of that would've been via HC.gov.

Biden's "800,000" figure from last night doesn't include the end date, nor does it clarify whether that's via HC.gov alone (which I strongly suspect) or nationally. If the end date was Tuesday the 27th, that would mean the enrollment pace slowed in April from 11,700/day to 10,100/day. Until a formal press release comes out (which will likely happen on Monday for the entire month of April), there's no way of knowing. PolitiFact just says that "A senior administration official said that Biden’s reference to the 800,000 new sign-ups reflected the most up-to-date tally, though it hasn’t been previously announced" which doesn't include an end date either.

With that out of the way, here's the relevant healthcare proposal sections of the transcript:

The American Rescue Plan lowered health care premiums for nine million Americans who buy their coverage under the Affordable Care Act. I know that’s really popular on this side of the aisle. But let’s make that provision permanent so their premiums don’t go back up.

In addition to my families plan, I’m going to work with Congress to address this year other critical priorities for American families. The Affordable Care Act has been a lifeline for millions of Americans, protecting people with pre-existing conditions, protecting women’s health. The pandemic has demonstrated how badly, how badly it’s needed. Let’s lower deductibles for working families in the Affordable Care Act and let’s lower prescription drug costs.

We know how to do this. The last president had that as an objective. We all know how outrageously expensive drugs are in America. In fact, we pay the highest prescription drug prices of anywhere in the world right here in America. Nearly three times, for the same drug nearly three times what other countries pay. We have to change that. And we can. Let’s do what we talked about for all the years I was down here in this body, in Congress. Let’s give Medicare the power to save hundreds of billions of dollars by negotiating lower drug prescription prices.

By the way, it won’t just — it won’t just help people on Medicare. It will lower prescription drug costs for everyone. And the money we save, which is billions of dollars, can go to strengthen the Affordable Care Act and expand Medicare coverage benefits without costing taxpayers an additional penny. It’s within our power to do it. Let’s do it now. We talked about it long enough, Democrats and Republicans. Let’s get it done this year.

This is all about a simple premise: Health care should be a right, not a privilege, in America.

Notice how he devoted exactly 3 brief sentences to the expanded subsidies and calling for them to be locked in permanently...followed by three paragraphs devoted to:

Again, here's the other ACA & Medicare upgrades which are being pushed heavily by Congressional Democrats:

Biden's actual words in the speech itself only address the first four (expanding benefits), not the fifth (lowering the age).

All three of the ACA bullets above refer to "lowering deductibles" (as well as co-pays, coinsurance and other types of out of pocket costs).

By devoting several times more lines in his speech on the other bullets, Biden is making it clear to Congressional Dems that the only real difference he has about healthcare priorities is that they want all of them bundled in with the #AmFamPlan itself while he'd prefer to pass them as a separate package...but he clearly states he still wants them done "this year".

Obviously a speech doesn't mean that much in terms of the actual legislation which gets passed and signed into law, and as I've noted before:

...in the end, it's Congress who ultimately decides what gets included in the final version of legislation, not the Administration. If ACA 2.0, Medicare expansion and/or any other provisions do end up being included and manage to pass both the House and Senate, President Biden's only option would be to veto the entire thing...and somehow I can't fathom him doing that.

However, Biden made it clear that no, he does not want to kick the Medicare/drug pricing can down the road past the midterms...he just wants it done after the larger infrastructure bill is passed. Somehow I don't think he'll complain too much if it all passes in one shot, though.