As I noted last night, the healthcare provisions of the upcoming American Families Plan could be in jeopardy, due primarily to (wait for it) the liberal and progressive wings of the Democratic party squabbling over whether to pass ACA 2.0 or to beef up Medicare instead. Aside from the fact that this is likely a false choice (there seem to be several options available to pay for both, or at the very least to pay for large portions of each), this has also led to various factions of Democrats to move more assertively to ensure their priorities are included.

The New Democrat Coalition (NDC) consists of 94 mainstream House Democrats, including many of those who first took office after the 2018 midterms to help flip control of the House.

Yesterday, 52 of the 94 members of the NDC cosigned an open letter to President Biden pushing for a list of ten healthcare provisions to be included in the #AmFamiliesPlan. Most of these make perfect sense and of course I strongly support them.

There's one item, however, which is causing healthcare wonks nationwide to scratch their heads...and it happens to be the very first one on the list:

The New Democrat Coalition (NDC) is comprised of 94 forward-looking Democrats in the U.S. House of Representatives seeking durable solutions to tackle the challenges and seize the opportunities of the twenty-first century. In the first one hundred days, the NDC has been working to advance policies in the U.S. House of Representatives to ensure people are protected from high health care costs, everyone is covered, and care is easier to access. The NDC has led the charge to put solutions over politics and stabilize and strengthen the Affordable Care Act (ACA).

...As you work to develop and advance the American Families Plan, we respectfully request that you work with us to include several NDC priorities to strengthen and expand on the ACA. These include:

Back in 2018, I posted a basic explainer of how reinsurance currently works in over a dozen states via ACA Section 1332 waivers: 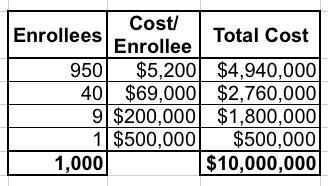 It's important to note right off the bat that reinsurance does nothing to actually reduce the overall cost of healthcare coverage or claims...it simply offloads a chunk of the cost from the enrollees to the government.

Under the current state-based reinsurance waivers, the state has to come up with a portion of the reinsurance funding, with the federal government coming up with the rest. The amounts and federal/state funding ratio can vary depending on the details, but it's usually something like a 2:1 split. Using the simple example above, let's say that the federal government would provide $1 million while the state would have to come up with the other $700,000.

The state's portion can come from wherever--a new surcharge, a tax, the general fund. Under ACA Section 1332 waiver rules, the federal government's share, however, cannot increase the federal deficit...which means that it has to come from the reduced ACA subsidies caused by the reinsurance premium reduction itself.

In other words, let's say that 80% of the enrollees above are eligible for ACA subsidies, averaging $500/month apiece. That comes to around $4.8 million in APTC subsidies. By reducing premiums 17%, however, those subsidies also drop; most people now qualify for smaller subsiides and some stop qualifying at all. Let's say it drops 21% to $395/month apiece on average. Voila: That's just over $1 million.

On paper, this seems fine. Wonky, but fine.

However...it also leads to a problem: Due to who receives ACA subsidies and how they're structured, especially in combination with #SilverLoading and other quirks of health insurance premium pricing, reinsurance can actually end up hurting lower-income people more than it helps middle- or higher-income people.

Officially, subsidized enrollees shouldn't see any difference either way; if they're capped at no more than $400/month, it shouldn't matter whether the unsubsidized benchmark premium is $500 or $600, since they'll still receive enough in subsidies to keep them at $400.

In reality, that only holds true if they happen to enroll in the benchmark Silver plan. If they took advantage of #SilverLoading, the difference between a $100 or $200 subsidy can be very important if they chose any other plan besides the benchmark...primarily Bronze or Gold plans. Premiums dropping 17% could mean the subsidy dropping 21%...which ironically amounts to a net premium increase for anyone receiving the subsidy.

Reinsurance kind of, sort of makes sense as long as the subsidy cliff is in place--anyone earning slightly over 400% of the Federal Poverty Level (FPL) was paying through the nose at full price, and many states felt that something had to be done to provide some relief for them. Plus, of the various viable methods of reducing premiums, reinsurance waivers were the only one which Trump CMS Administrator Seema Verma seemed to be OK with, so that's what many states went with.

Assuming the expanded subsidies under the American Rescue Plan (ARP) are made permanent, however (one of the other key bullets in the NDC letter)...suddenly the purpose of reinsurance seems vague at best.

I'm not the only one asking about this either:

Nerdy Q, but: Is reinsurance still important if subsidies go all the way up the income scale? https://t.co/I0BTqvK2Nd

Not really unless it is a backdoor to price caps as I have sometimes seen suggested. Basically all claims over $200,000 pay Medicare rates.

With increased ACA subsidies capping premiums at 8.5% of income, reinsurance would only help a very small number of high-income people.

The same could be said of a public option with respect to premiums. (A public option might have a broader network than private insurers.)

Depends on what the goal is.

Much less, at least the way reinsurance has typically been used in the ACA markets. Maybe different if you're talking about a very high attachment point. Distributionally it'd basically all go to people making >600% of FPL.

Recent piece on this: https://t.co/XVmU0tMcmD

As Dave Anderson noted this morning:

Reinsurance as described in the HR 1425 is a caliper reinsurance program. It would have the federal government pay a percentage of claims between a floor level and a ceiling level. The program would be funded at $10 billion dollars per year and effectively it lowers premiums by about $10 billion dollars as premiums no longer have to cover all claims.

It will lower federal spending by even more than $10 billion dollars per year as the individual contribution amount is constant and all of the gain accrues back to the treasury. People who were marginally subsidy eligible under ARP enhanced subsidies without reinsurance would become marginally subsidy ineligible with reinsurance.

This is a solution in search of a problem.

...I am having a hard time figuring out what the point of reinsurance as outlined in HR 1425 actually is intended to do.

$10 billion per year is $100 billion over a decade. As Anderson notes, if included as part of the American Families Plan, the net cost of a $10 billion/year federal reinsurance program could potentially end up being less than $0...because it would also reduce the amount of APTC subsidies paid out on average by more than $10 billion/year. In other words, it's conceivable that it would be a net savings for the fedral government...which sounds great, until you realize that it would do this by reducing net subsidies for subsidized enrollees by more than it reduced gross premiums for unsubsidized enrollees.

If the goal is to make ACA subsidies less generous in order to save a few billion dollars off of the #AmFamilyPlan, there's a much simpler way of doing so: Scrap the reinsurance program and simply bump the ARP subsidy formula up by bit (ie, have benchmark premiums range from 0.5 - 9.0% instead of 0.0 - 8.5% or whatever).