The Storm is Coming: Prepare for REVERSE Silver Loading in 2020

I talked about this the other day, but re-reading my post, I don't think I emphasized it nearly enough:

It's also important to keep in mind that due to how the ACA's subsidy formula is structured (combined with Silver Loading and Silver Switching), a lower benchmark premium will actually result in higher net premiums for many subsidized enrollees (although it's still good news for those who are unsubsidized). Here's why:

This would leave them paying $228/month for the benchmark Silver...but they can apply that towards a Bronze plan if they wish so they'd only pay $28/month, or a Gold plan so they only pay $328/month.

What happens next year if the benchmark Silver plan drops by 4%...but the Bronze, Gold, and the OTHER Silver plans stay flat?

This is essentially Silver Loading in reverse, and it's why cherry-picking the benchmark Silver plans only can be very misleading when it comes to figuring out how much a particular enrollee will spend compared to last year.

Hell, CMS even lays out this problem in their own press release bragging about how "premiums are 4% lower" for 2020. See this table? 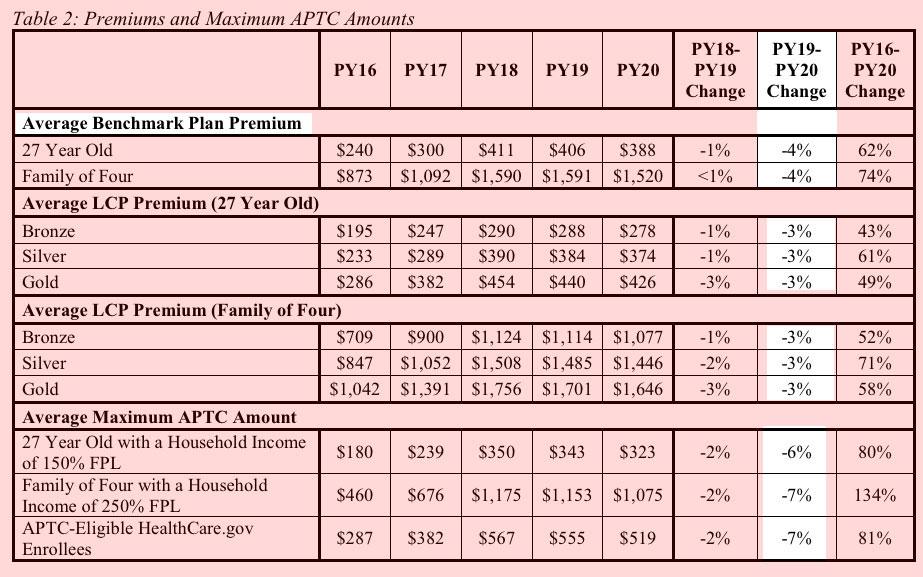 Notice how the average benchmark plan is dropping by 4% (for 38 states only, remember...the 13 state-based exchanges aren't included here)...but the average lowest-cost plans at every metal level are only dropping by 3%? That 1 percentage point gap may not sound like much, but it can make a big difference for lower-income folks, and in some parts of the country the benchmark plan has dropped much more than the rest of the plans, especially Bronze and Gold.

In addition, notice how the maximum subsidy amount (APTC) is dropping by 6-7% this year. That may sound like good news from a "thrifty government budgeting" POV (the same year the Trump Administration has racked up nearly $1 trillion deficit, that is), but for the enrollee receiving the subsidy, this reduction can be a major blow.

I used a made-up example above...but now that 2020 window shopping is officially live on both HealthCare.Gov and other exchange/approved web brokerage sites like HealthSherpa/etc, I'm already starting to see real-world examples of this...and in some cases it's far more dramatic than mine:

Up is Down. Down is Up. And the Texas 2020 Health Insurance Marketplace is still a Conundrum https://t.co/xaEIx5lAjK

Benchmark (also known as the second lowest cost silver plan) rates are down, which is great-in theory.

More options should help drive prices down. In theory. (Or at least my sister with her Econ degree from Berkley tells me). Doesn’t work in the marketplace. A new low cost carrier drives the subsidy amounts down, which increases actual consumer costs.

...This couple is 66 and 60. The husband is on Medicare, but still “counts” towards the subsidy amount.

No, its not a typo. The benchmark plan decrease is going to double this woman’s premium if she stays on the same plan.

We're seeing something similar in Colorado: https://t.co/LSccwp2OxA
More plans, and the biggest rate decreases in the country. But people with premium subsidies are receiving some unpleasant renewal notices. https://t.co/BxUQhjyWvj

For people who do get subsidies, the subsidies will decrease in line with reductions in the benchmark premium in each area. And some plans (including the benchmarks in some areas) will have sharper premium decreases than others. As an example, consider a family of four (parents in their early 40s and two young children) living in Denver and earning $95,000 a year. We’ll keep them the same age in 2019 and 2020 and keep their income unchanged in order to compare apples to apples.

In 2019, they qualified for a premium subsidy of $747/month. And after that subsidy was applied, the least-expensive plan they could get was $355/month (a $6,000 deductible plan from Bright Health). If they wanted an HDHP in order to be able to contribute to an HSA, their least expensive option was $445/month after their subsidy.

...Because the benchmark plan is so much cheaper, premium subsidies for everyone in the area are shrinking. For this family, the lowest-cost option for 2020, after their subsidy is applied, will be $523/month. The same Bright Health plan that had a net premium of $355/month in 2019 will be $529/month in 2020 — despite the fact that its full-price premium (ie, without any subsidies) is dropping from $1,102/month to $909/month. If this family wants an HDHP in 2020, the cheapest one will be $569/month.

So if we assume this family enrolled in the $355/month plan in 2019 and they want to keep it for 2020, their net premiums are going to increase by 49 percent (from $355/month to $529/month). And shopping around isn’t going to do them much good, because the cheapest option for 2020 (a similar plan from Bright Health) is still going to be a 47 percent increase in their net premium.

It's important to understand that the examples listed above are not representative of everyone. Just as not everyone benefited from silver loading in 2018 & 2019, not everyone will be stung by "reverse silver loading" in 2020. Many people will still see better deals than last year, especially, ironically, in regions where the benchmark premium has increased, while others will end up paying around the same.

In some cases, they may pay slightly more simply because everyone in their household is one year older, even if everything else (income, unsubsidized premiums, benchmark plan, etc) stays exactly the same. And finally, some people will be able to save money by either downgrading (or even upgrading) their plan from Bronze or Gold to Silver, or vice-versa.

It will depend greatly on where you live, what your income is, how the plans have changed and what new carriers may have entered the market this year. As always, I strongly recommend shopping around and entering your household/age/income information each and every year to see what your best options are for the upcoming year.

UPDATE: My friend/colleague Dave Anderson has crunched the numbers using the CMS ACA Public Use Files (PUF), and determined how widespread the "reverse silver loading" issue is (remember, this is only relevant for people who earn less than 400% FPL):

There's around 3,100 counties, parishes, boroughs or "county equivalents" nationally (including the 50 states & DC); roughly 30% of them still have some amount of silver loading advantage for 2020, down from 36%. Of course, that doesn't tell you anything about the population of those counties. It's also worth noting that even within those 937 counties, the amount of silver loading advantage may have dropped relative to last year (that is, instead of being $50/month less than the benchmark plan, the gold plans might only be, say, $20/month less next year).

On the other hand, another friend/colleague, Andrew Sprung, notes that in the 9 counties which hold the largest number of on-exchange ACA enrollees...

In these counties, the silver loading sky hasn't fallen.  The chart below compares the lowest cost plan (LCP) at each metal level in 2019 and 2020 for a 40 year-old with an income of $24,000 per year. That's a bit under 200% of the Federal Poverty Level (FPL), qualifying the enrollee for strong Cost Sharing Reduction (CSR) if she selects a silver plan.

At that income, a benchmark silver plan cost $123 per month, regardless of age or location.  Silver loading may be assumed to have had a significant impact if the gold LCP is less than about $160 per month, and if the bronze LCP is below about $50/month.

...It's a wash: 11 LCPs are higher in 2020, and 11 are lower. Three are essentially unchanged. In most cases, differences are fairly modest.

A cornucopia of caveats is in order.  As always in the ACA marketplace, premiums, and year-to-year premium changes, vary widely. In California, new supplemental state subsidies (integrated in the premiums quoted above) reduce premiums for those with incomes below 400% FPL by an average of $12 per month.  In Florida, Oscar is offering a $0 premium bronze plan (with a $3,000/day inpatient hospital copay) that may lure a significant chunk of the state's 1.2 million silver plan enrollees, most of whom qualify for strong CSR, out of silver. That's an extreme case illustrating the fact that deductibles, copays, out-of-pocket maximums vary widely within metal levels -- as does network size and quality. This year, CMS is introducing quality ratings into the HealthCare.gov marketplace, which may lead some enrollees to focus less on premiums than in previous years.

In short, it's all over the map (literally and figuratively). SHOP AROUND. ENTER YOUR CURRENT INFO & PROJECTED ESTIMATES. SEE WHAT'S AVAILABLE.