In Week Three of the 2021 Open Enrollment period, 758,421 people selected plans using the HealthCare.gov platform. As in past years, enrollment weeks are measured Sunday through Saturday.

It's a bit tricky to compare the first weekly report against the previous year because the snapshot reports run Sunday - Saturday. Last year Nov. 1st fell on a Friday, so "Week 1" was actually only 2 days; "Week 2" included the following 7 days, for 9 days total; and "Week 3" included just 16 days total.

Keep in mind, however, that this is if you include Pennsylvania and New Jersey! Those two states enrolled a total of 102,210 people in the first 16 days last year, so it's actually:

...or 17.1% higher per day than last year, which is fantastic, especially under the circumstances (the pandemic, the looming Supreme Court decision and the ongoing coup attempt by Donald Trump to overthrow the election results).

It's also important to note the breakout between current enrollees actively renewing their policies and new consumers enrolling.

In addition, with the Week Three report, CMS has also started breaking enrollment out by state for the 36 states hosted via HC.gov. I've included last year's "Week 4" (23 day) numbers for comparison, and have adjusted them to account for the 2 missing days this year to get an idea of how each state is performing year over year so far: 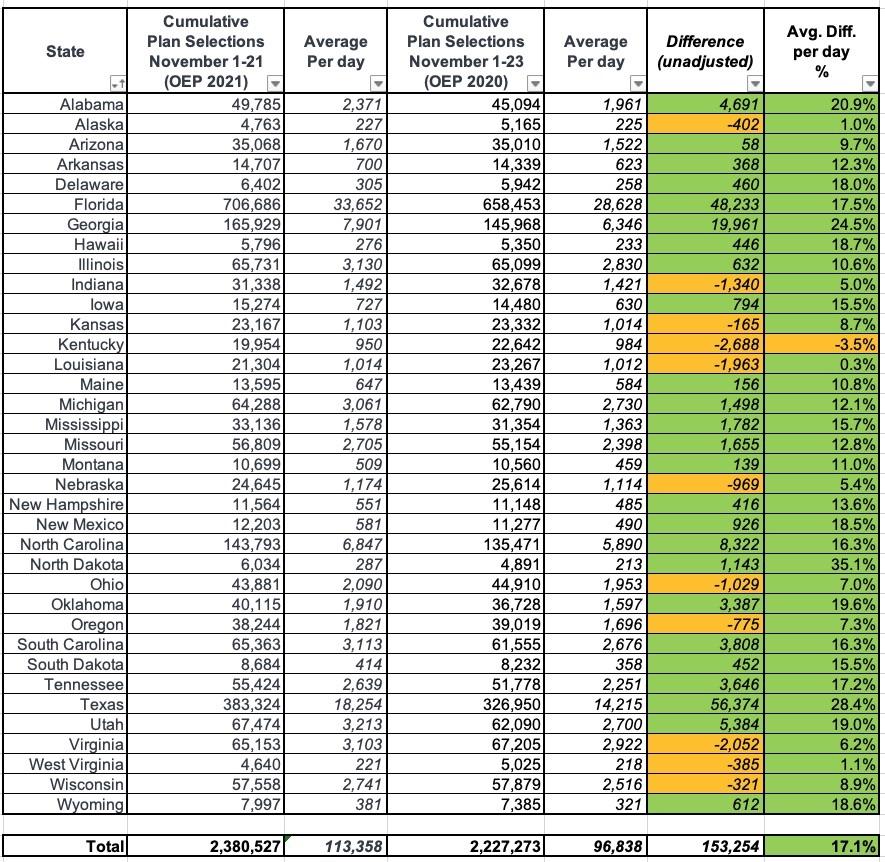 As you can see, on a per-day average basis, 35 out of 36 states are outperforming last year so far. The highest increase is North Dakota, which is up 35% year over year; I'm assuming their worst-in-the-nation COVID-19 crisis has something to do with that (although South Dakota is "only" up 15.5% vs. last year).

The only state underperforming last year so far is Kentucky. I don't have any insight about what's causing that other than perhaps some confusion about the status of the kynect state-based exchange...kynect is fully back in operation next year (assuming the ACA surives at all), but this year Kentucky residents are still enrolling via HealthCare.Gov.