Still, yesterday they did issue a big press release about the 2021 Open Enrollment Period which includes some other important information:

Covered California Begins Renewal of More Consumers Than Ever Before and Announces Final 2021 Rate Change at All-Time Low of 0.5 Percent

SACRAMENTO, Calif. — With the start of Covered California’s open-enrollment period just a few weeks away, the exchange announced that the renewal process for a record number of enrollees is now underway — with more than 1.5 million Californians eligible to renew their coverage. In addition, the preliminary rate change that Covered California previously announced in August has been revised downward to a new all-time low of 0.5 percent for the 2021 plan year.

“Covered California heads into the upcoming open-enrollment period with more consumers than ever, and we will be doing so with the lowest rate change in our history,” said Peter V. Lee, executive director of Covered California. “California has built on and strengthened the Affordable Care Act, and right now this means that Californians facing a pandemic and recession are finding the security of having access to quality, affordable health care coverage.”

The latest data shows that Covered California had a record 1.5 million enrollees in June of 2020. When compared to historical data, Covered California’s highest enrollment total in October, which is when the renewal process begins, was 1.3 million in 2018. Current enrollees can begin renewing their coverage now, and they have until Dec. 15 to finalize their 2021 plan choice. People who do not actively select a plan for 2021, will be renewed in their current plan, so they do not suffer a gap in coverage.

“During a pandemic and recession, it is no surprise that Covered California is seeing record enrollment, because we are a safety net to help people get quality health care coverage,” Lee said.

Consumers both on and off the exchange benefit from Covered California’s competitive marketplace, which allows them to shop for the best value and benefit from lower increases. In addition, many consumers can save more by shopping and switching to a lower-cost health plan. With the reduction in the statewide average rate change, the average rate change for unsubsidized consumers who shop and switch to the lowest-cost plan in the same metal tier is now -7.4 percent, which means many Californians can get a lower gross premium if they shop and switch. The average rate change varies by region and by an individual’s personal situation.

Nearly nine out of every 10 consumers who enroll through Covered California receive financial help — in the form of federal tax credits, state subsidies, or both — which help make health care more affordable. California’s state-specific enhanced subsidies, which were introduced for the first time in 2020, are benefiting about 590,000 enrollees in Covered California and are available again for both new and renewing members in 2021.

“The bold policy choices made in California to build on and strengthen the Affordable Care Act have led to a very competitive market that is full of choice for consumers,” Lee said. “Covered California continues to provide stability and lower costs in the face of national uncertainty in health care.”

In order to further help new and renewing consumers, Covered California also overhauled its website, www.CoveredCA.com, to make it easier for people to learn about their health insurance options and sign up for quality coverage.

The upgrades include a modern redesign, more-intuitive navigation, condensed and simplified language and enhancements in accessibility and mobile responsiveness. The improvements mark the first complete overhaul of the website since the exchange opened in 2013.

“The new and improved version of CoveredCA.com is built to help Californians find the best health insurance option, no matter what device they are using,” Lee said. “In this day and age when more and more people are conducting business on their phones and tablets, these upgrades will make it easier for them to get the information they need and to sign up for the health care coverage they deserve.”

The new website is the result of extensive user testing and feedback from consumers, internal program staff, the Department of Health Care Services and various stakeholders. Testing with real users began in early 2017 and continues to be conducted at every stage of design and development. The design was led by Covered California’s Office of Communications and Public Relations and functional development was led by Covered California’s office of Information Technology.

Current enrollees and those interested in applying for coverage can explore their coverage options — and find out whether they are eligible for financial help — in just a few minutes by using the website’s Shop and Compare Tool. All they need to do is enter their ZIP code, household income and the ages of those who need coverage to find out which plans are available in their area.

Open enrollment for the upcoming year will begin Nov. 1, 2020, and run through Jan. 31. Open enrollment is the one time of the year where eligible consumers cannot be turned away from coverage for any reason. Covered California will be launching a new ad campaign on Nov. 9 and has budgeted $157 million for marketing, sales and outreach during the current fiscal year — an increase of more than $30 million from last year.

In addition, consumers who need coverage earlier may be eligible for the special-enrollment period that is currently underway. Consumers who experience a qualifying life event, such as: losing their health care coverage, losing their job, suffering a loss of income, moving or being a wildfire victim, could be eligible to sign up for coverage that begins in November or December.

“When the worst is happening in health care, we want to make sure that people have a path to coverage, whether it is through Covered California or Medi-Cal,” Lee said. 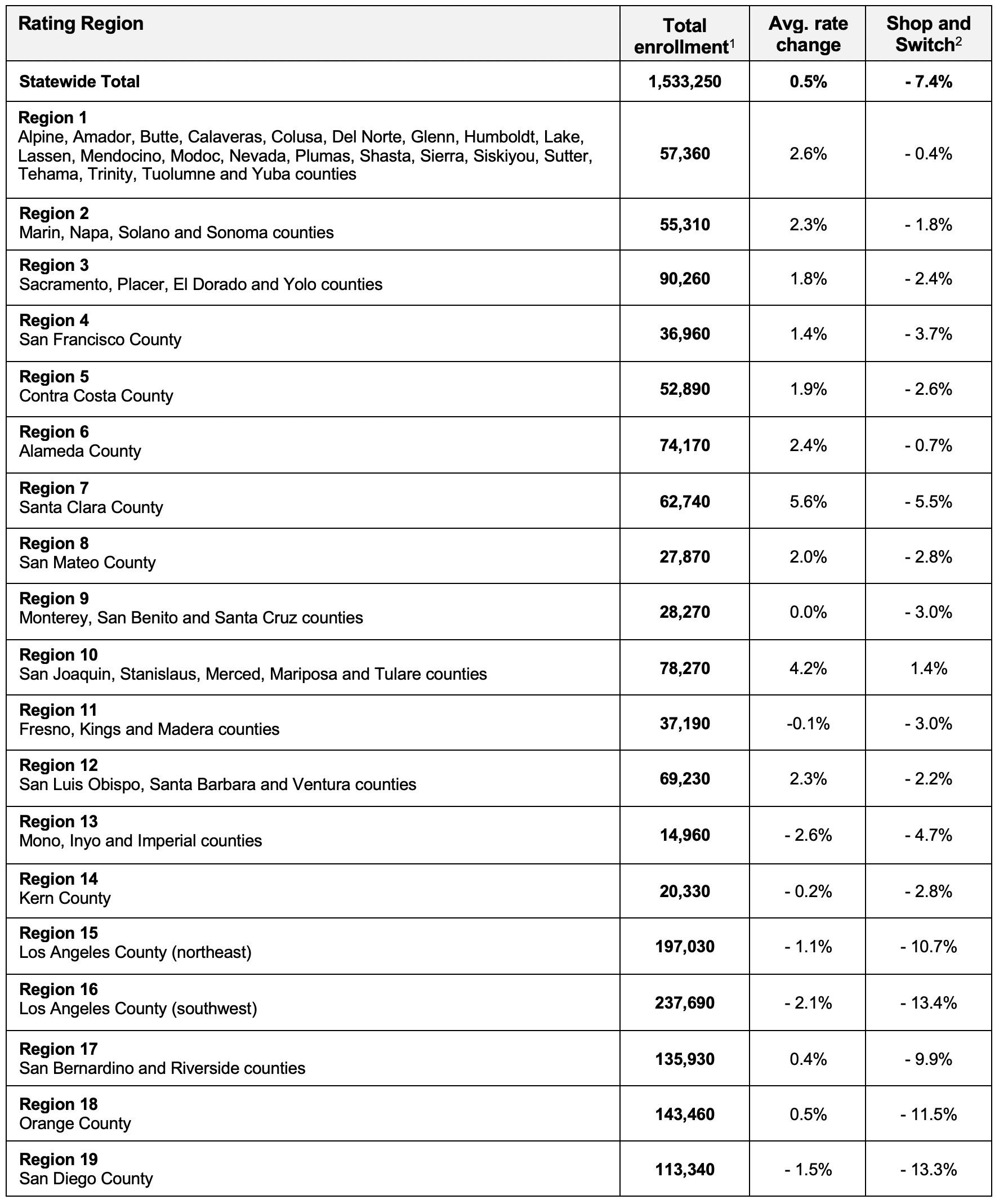 Note: Effectuated enrollment for coverage in the month of June 2020

Shop and Switch refers to the average rate change a consumer could see if they shop around and switch to the lowest-cost plan in their current metal tier. 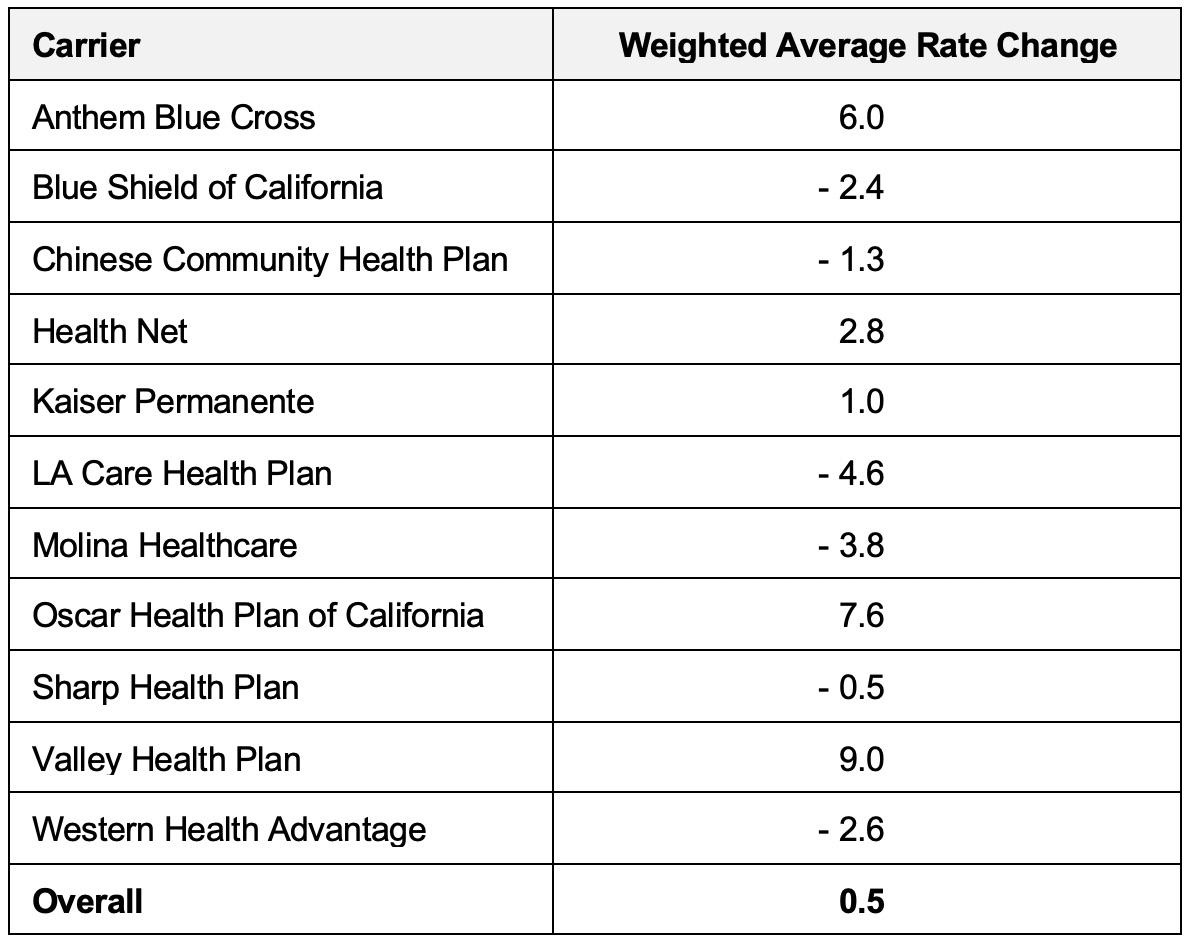