Republican Senator Cory Gardner is up for re-election this fall, and he's in major trouble. Various polling over the summer has him trailing his Democratic opponent, former CO Governor John Hickenlooper, by around 6 points on average.

Gardner is underwater for many reasons, many of which have to do with his repeated attempts to repeal the Affordable Care Act...most recently by voting for the "Skinny Repeal" bill the summer of 2017 which was nipped in the bud by a single vote thanks to John McCain's famous "thumbs down" vote.

In a pathetic attempt to gaslight Colorado voters, Gardner is now trying to paint himself as supporting healthcare expansion, going so far as to try to claim credit for passage and approval of last year's Section 1332 Reinsurance Waiver program which dramatically reduced premiums for unsubsidized individual market enrollees throughout Colorado...even though a) he didn't have a damned thing to do with it and b) the reinsurance program was only able to be developed thanks to the Affordable Care Act...which Gardner has repeatedly voted to repeal.

This week, with the election quickly approaching and his prospects for re-election growing dimmer by the minute, Gardner  is at it again, showing jaw-dropping hypocrisy with the introduction of a disingenuous, one-sentence bill into the Senate which he claims would "protect coverage of pre-existing conditions", of all things.

S. 4506: A BILL To ensure coverage of pre-existing conditions under private health insurance, and for other purposes.

This Act may be cited as the “Pre-Existing Conditions Protection Act of 2020”.

This is laughable for multiple reasons, as noted by this Colorado Times Recorder article:

Now Gardner has introduced a bill, the text of which has yet to be released, that would, according to a news release from the senator’s office, “guarantee Coloradans with pre-existing conditions have health insurance coverage protections.”

Experts say Gardner’s legislation appears to be motivated more by politics than substance, especially given that federal law, under Obamacare, as well as Colorado law already requires insurance companies to cover Coloradans with pre-existing conditions.

“Big picture, this seems to me like a late-in-the-day effort to protect the senator politically, given his support for repealing the pre-existing condition protections in the ACA in 2017 as well as public opinion about the Trump administration’s current efforts to undo pre-existing condition protections at the Supreme Court,” said Sabrina Corlette, a professor at Georgetown University’s Health Policy Institute.

...“To me, this is just a political stunt because these protections already exist at the federal and state level,” says Adam Fox, Director of Strategic Outreach for the Colorado Consumer Health Initiative. “This is pure politicking. If Gardner really wanted to help people with pre-existing conditions, he would protect the ACA, denounce the lawsuit against it, and make sure our Medicaid program is fully funded through the health crisis.”

Gardner's bill would do literally nothing unless the ACA itself is struck down by the Supreme Court...which he supports. Even then, it still wouldn't have any impact in Colorado because it's already duplicated under existing state law.

More practically, even if both the ACA and existing state law banning prohibition of discrimination against those with pre-existing conditions were struck down, all this bill would do is cause premiums for nongroup market insurance policies to become absurdly unaffordable for most people, since the ACA's financial subsidies wouldn't be replaced (and with the ACA struck down, Medicaid expansion would be gone as well).

In addition, while Gardner's bill would technically include some chunks of the 3-legged stool's blue leg, it would only include about half that leg...and none of the rest of it. That means no financial subsidies, no price gouging protections, no open enrollment or mandate penalty to keep premiums in check, no minimum actuarial value required, no cap on out of pocket expenses, and a return to annual & lifetime coverage limits.

In other words, the 3-legged stool would look something like this: 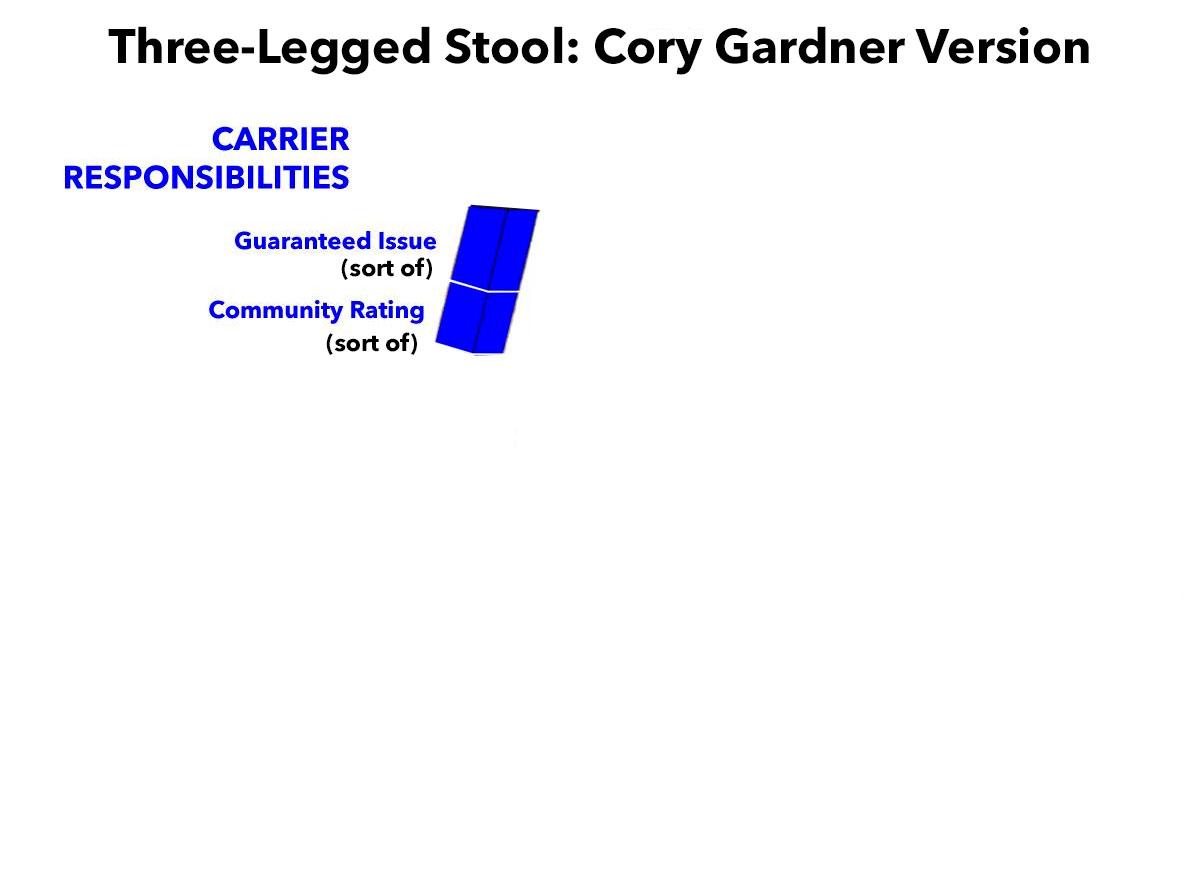