SACRAMENTO, Calif. — Covered California announced on Tuesday a record-low insurance premium rate change for the second consecutive year. The preliminary average rate change for California’s individual market is 0.6 percent for the upcoming 2021 plan year, which is the lowest mark since the launch of the Affordable Care Act and follows a rate change of only 0.8 percent in 2020.

“California continues to show the nation what can be done when you build on and strengthen the Affordable Care Act,” said Peter V. Lee, executive director of Covered California. “California’s bold policies to provide additional state financial help, to reinstate the penalty to encourage consumers to enroll in health care, and to make significant marketing investments in Covered California are providing stability and lower costs in the face of national uncertainty.”

The historically low rate change was driven by California’s efforts to build on the Affordable Care Act through affordability initiatives — the state subsidies and the individual mandate enforcement provision that went into effect in 2020 — as well as ongoing investments in marketing and outreach that have led to increased enrollment and one of the healthiest consumer pools in the nation. The most recent data from the Centers for Medicare and Medicaid Services found that California has the second lowest “State Average Plan Liability Risk Score” in the nation, which marked the sixth straight year that California has been among the top five healthiest states.

“Access to affordable health care coverage is more critical than ever as our nation and state navigate the COVID-19 pandemic,” said Gov. Gavin Newsom. “Covered California is leading the nation by eliminating barriers to access and providing Californians real opportunities to get the care and coverage they need.”

“Health care costs are never a one-year story, and California has shown — again and again — that it can provide stability and lower costs in the face of federal policy changes that could have resulted in dramatic rate increases,” Lee said. “The past three years can serve as a roadmap for the rest of the nation when it comes to successfully responding to federal challenges, reducing prices and encouraging enrollment.”

The main factors that contributed to the low rate change include the following:

“After a large increase in 2019 caused by the federal action that zeroed out the penalty on individuals failing to have insurance coverage, California has seen two years of less than 1 percent premium increases,” Lee said. “Covered California’s ability to provide stability and lower costs to consumers is the product of strong state policies, a competitive market and major investments in marketing.”

“State policies make a difference, and California is showing how you can keep health care costs under control and bring coverage within reach of more people,” said California Health and Human Services Secretary and Covered California Board Chair, Dr. Mark Ghaly. “Making more financial help available and encouraging consumers to get covered means fewer people without insurance and lower health care costs for everybody.”

Consumers both on and off the exchange will benefit from Covered California’s competitive marketplace, which allows them to shop for the best value and save money if they switch plans. The average rate change for unsubsidized consumers who shop and switch to the lowest-cost plan in the same metal tier is -7.3 percent, which means many Californians may be able to get a lower gross premium than they have now if they shop and switch (see Table 1: California’s Individual Market Rate Changes).

“Shopping for the best deal will once again be important for consumers because as our carriers become more competitive on pricing and the cost of the second-lowest Silver plan decreases, consumers may find that the amount of their financial help is lowered,” Lee said.

Roughly nine out of every 10 consumers who enroll through Covered California receive financial help — in the form of federal tax credits, state subsidies, or both — which help make health care more affordable. California’s state-specific enhanced subsidies are benefiting about 590,000 consumers out of the current 1.5 million enrollees in Covered California. In 2020, with the combination of federal tax credits and state subsidies, the average consumer receiving financial help were paying only $130 per month of their total premium of $587 (with federal and state assistance reducing their costs by $457 or nearly 80 percent).

In addition, nearly 38,000 middle-income consumers have qualified for new state subsidies, with an average state subsidy to eligible households of $475 per month, lowering their monthly premium by nearly 44 percent.

The state subsidies are only available to eligible consumers through Covered California. The amount of financial help consumers receive will vary depending on their age, their annual household income and the cost of health care in their region.

In the coming year, all 11 carriers will continue offering products across the state, and two carriers will expand their coverage areas, providing increased competition and consumer choice. In 2021, 99.8 percent of Californians will have two or more choices, 88 percent will be able to choose from three carriers or more, and over three-fourths of Californians (77 percent) will have four or more choices.

“A competitive market means virtually everyone across California will have a choice in coverage and is further proof that the Affordable Care Act is working in California for both consumers and health plans,” Lee said.

Consumers can find out what they will pay for their 2021 coverage starting during the renewal period in October, when they can visit Covered California’s website at www.CoveredCA.com and begin using the Shop and Compare Tool.

Covered California is currently in a special-enrollment period due to the COVID-19 pandemic, which allows the uninsured to sign up for coverage if they are eligible to enroll in the exchange. The most recent data shows that 231,040 people have signed up through Covered California for health care coverage between March 20 and July 25, which is more than twice the number who signed up during the same time last year. The special-enrollment period is available through the end of August.

As an aside, this brings the total number of confirmed COVID-19-specific SEP enrollments up to at least 320,000 across the 8 state exchanges which offered one and have released their COVID SEP enrollment data: 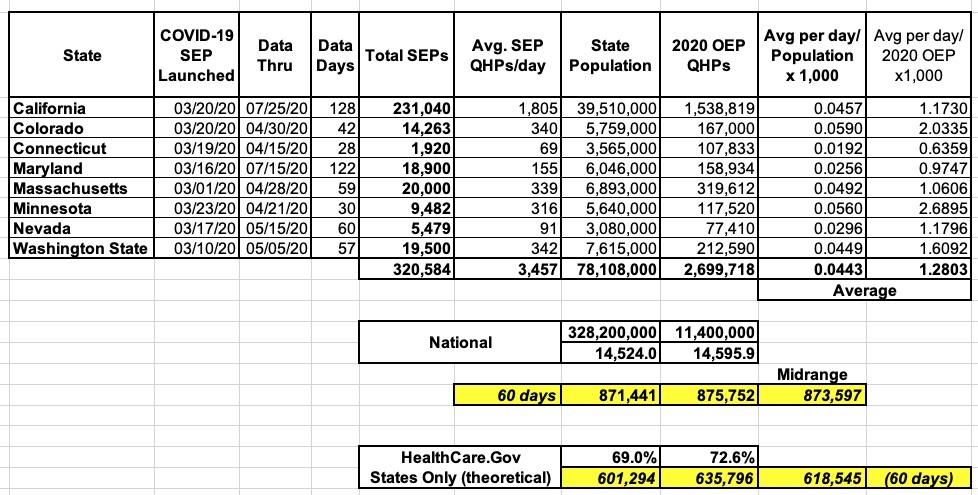 Consumers can easily find out if they are eligible for Covered California or Medi-Cal – and see whether they qualify for financial help and which plans are available in their area – by using the CoveredCA.Com Shop and Compare Tool and entering their ZIP code, household income and the ages of those who need coverage. 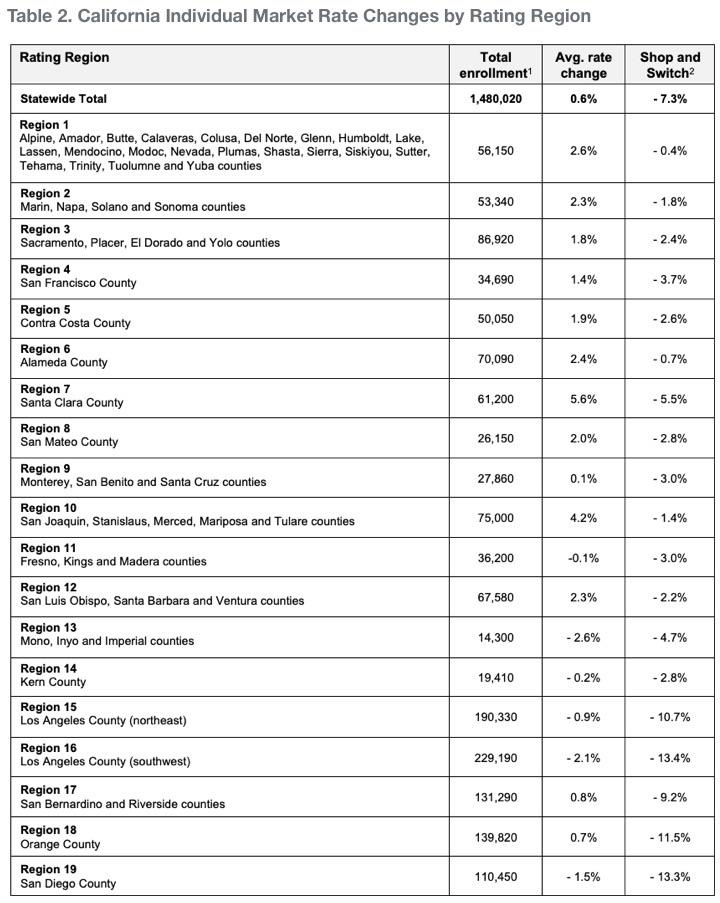 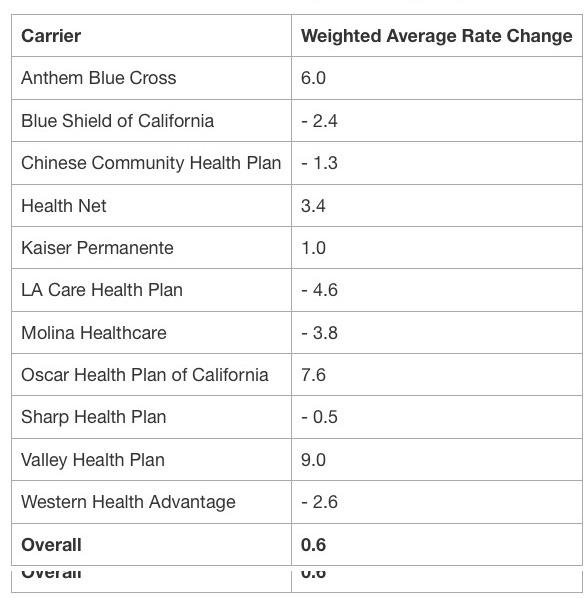 Here's what this looks like with enrollment figures included. It's important to note that unlike my spreadsheets for most other states, the one below for California only includes on-exchange enrollees. California's total individual market is around 2.3 million people, with the remaining ~800,000 being enrolled in OFF-exchange ACA policies.

HOWEVER, I asked about this during the CoveredCA webinar a few moments ago and Peter Lee (CoveredCA executive director) stated that around 3/4ths of those 800K (roughly 600K) are enrolled in "mirrored" ACA plans which are identical to the on-exchange plans and should be very similar in breakout in terms of average rate changes/etc. The other 200K enrollees are in non-standard off-exchange plans which they haven't really looked at yet, but it sounds like the overall weighted average including all 2.3 million should still be pretty close to 0.6%:

Unfortunately, neither the press release nor the webinar provided any info whatsoever about California's small group market, but I've always been kind of spotty about covering that anyway. It would still be nice to see it, and they said data on the sm. biz market will be coming soon.