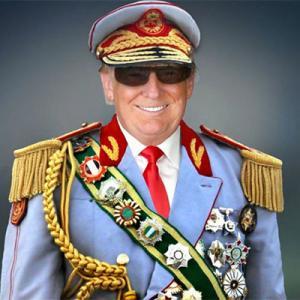 Trump: "But we haven't had...uh...excuse me...you heard me yesterday. We're signing a healthcare plan...within two weeks. A full and complete healthcare plan that the Supreme Court decision on DACA gave me the right to do. So we're gonna solve...we're gonna sign an immigration plan, a healthcare plan, and various other plans....and nobody will have done what I'm doing in the next four weeks. The Supreme Court gave the President of the United States powers that nobody thought the President had by approving, by doing what they did, their decision on DACA. And DACA's gonna be taken care of also. But we're getting rid of it because we're gonna replace it with something much better. We got rid of, already, which was most of Obamacare, the individual mandate. And that, I've already won on. And we won also on the Supreme Court. But the decision by the Supreme Court on DACA allows me to do things on immigration, on healthcare, on other things that were never done before...and. you're gonna find it to be a very exciting two weeks."

Hoo, boy. OK, first of all, Wallace is correct that around 500,000 people have "signed up for Obamacare" since the COVID-19 pandemic hit...at least 340,000 via the state-based exchanges and another 180,000 or so via the federal exchange (the actual total is over 1.2 million, with around 700,000 who would've enrolled via normal Special Enrollment Periods even without the pandemic).

As for Trump, his entire response is utter nonsense, as usual:

it may shock you to learn, but it is nonetheless true, that the daca decision (which went against the trump administration) conferred on the executive branch no new powers

i know, i know. it is hard to believe that the president may not be playing straight with the american public on an important question of administrative law.

I figured Trump was spewing his usual bullshit, and for the most part he is...but as we learned last night, it turns out that he really thinks the Supreme Court's DACA decision gives him complete power to do whatever the hell he wants:

Between the lines: The White House thinking is being heavily influenced by John Yoo, the lawyer who wrote the Bush administration's justification for waterboarding after 9/11.

Yoo detailed the theory in a National Review article, spotted atop Trump’s desk in the Oval Office, which argues that the Supreme Court's 5-4 DACA ruling last month "makes it easy for presidents to violate the law."

...This is a somewhat strained reading of both procedural history and the law, according to Axios’ Sam Baker. The Supreme Court has never ruled either way on DACA’s legality.

Meadows says the Trump administration is readying a new executive order to expand the federal takeover of cities based on alleged lawlessness: "Attorney General Barr is weighing in on that with Secretary Wolf, and you'll see something rolled out on that this week." https://t.co/OltkCHVTP1

The Border Patrol says it has authority to “conduct arrests” in Portland.

Portland has been invaded by federal agents—including unidentified, camouflage-clad officers who have emerged from unmarked minivans to arrest protesters. These officers have reportedly refused to say what agency they work for. But their supposed authority to police Oregon’s largest city and make arrests appears to rest on a June 26 executive order by President Donald Trump calling for the protection of statues, monuments, and federal property.

Black Lives Matter protests in Portland have continued this month, drawing attention from Trump, who falsely described the city as “totally out of control.” Trump also threatened this week to “take over” cities he claims are suffering from crime sprees. Agents from US Marshals Service, Federal Protective Service, Homeland Security Investigations, and US Customs and Border Protection (CBP) have been in Portland since early this month. But on July 14, protesters began to document instances in which armed agents wearing masks and military-style fatigues emerged from unmarked vehicles, detained protesters with no explanation, and drove away.

A Navy vet asked federal officers in Portland to remember their oaths. Then they broke his hand.

PORTLAND, Ore. — He came to the protest with a question. He left with two broken bones in a confrontation with federal officers that went viral.

Christopher David had watched in horror as videos surfaced of federal officers in camouflage throwing protesters into unmarked vans in Portland. The 53-year-old Portland resident had heard the stories: protesters injured, gassed, sprayed with chemicals that tugged at their nostrils and burned their eyes.

David, a graduate of the U.S. Naval Academy and former member of the Navy’s Civil Engineer Corps, said he wanted to know what the officers involved thought of the oath they had sworn to protect and defend the Constitution.

...An officer trained his weapon on David’s chest as several agents pushed him, sending David stumbling backward. But he regained his center and tried again. Another agent raised his baton and began to beat David, who stood unwavering with his arms at his sides. Then another officer unloaded a canister of chemical irritant spray into David’s face.