They were warned. They were given an explanation. Nevertheless, they're persisting.

Yesterday, the Trump Administration formally submitted their official brief with the Supreme Court of the United States asking SCOTUS to completely and fully strike down the entire Patient Protection & Affordable Care Act. This is the latest development in the utterly insane "California vs. Texas" lawsuit (formerly "Texas vs. U.S.", "Texas vs. Azar", or as I prefer to label it, "Texas Fold'em", a name originally coined by U of M law professor Nicholas Bagley but which doesn't seem to have caught on with anyone other than me so far.

I've written about this completely absurd lawsuit more times than I care to remember, but as a reminder, here's what it comes down to.

The image below is the "3-legged stool" of the Affordable Care Act.

The blue leg represents the various patient protections which the ACA requires health insurance carriers to provide--guaranteed issue, community rating, essential health benefits and so on.

The green leg represents the resources provided by the federal government to help people enroll in and afford to pay for the healthcare policies--financial assistance for lower-income enrollees, a fair, trustworthy marketplace in which to review & enroll in those plans, and a cap on profits to prevent price gouging.

The red leg represents the enrollee's responsibilities, which (aside from paying their monthly premiums) include a limited time window (with some exceptions) within which to enroll (the Open Enrollment Period)...and the Individual Mandate Penalty, which states that (again, with certain exceptions), everyone has to have some form of ACA-compliant healthcare coverage (whether private or public, like Medicare or Medicaid), and if they don't, they have to pay a financial penalty: 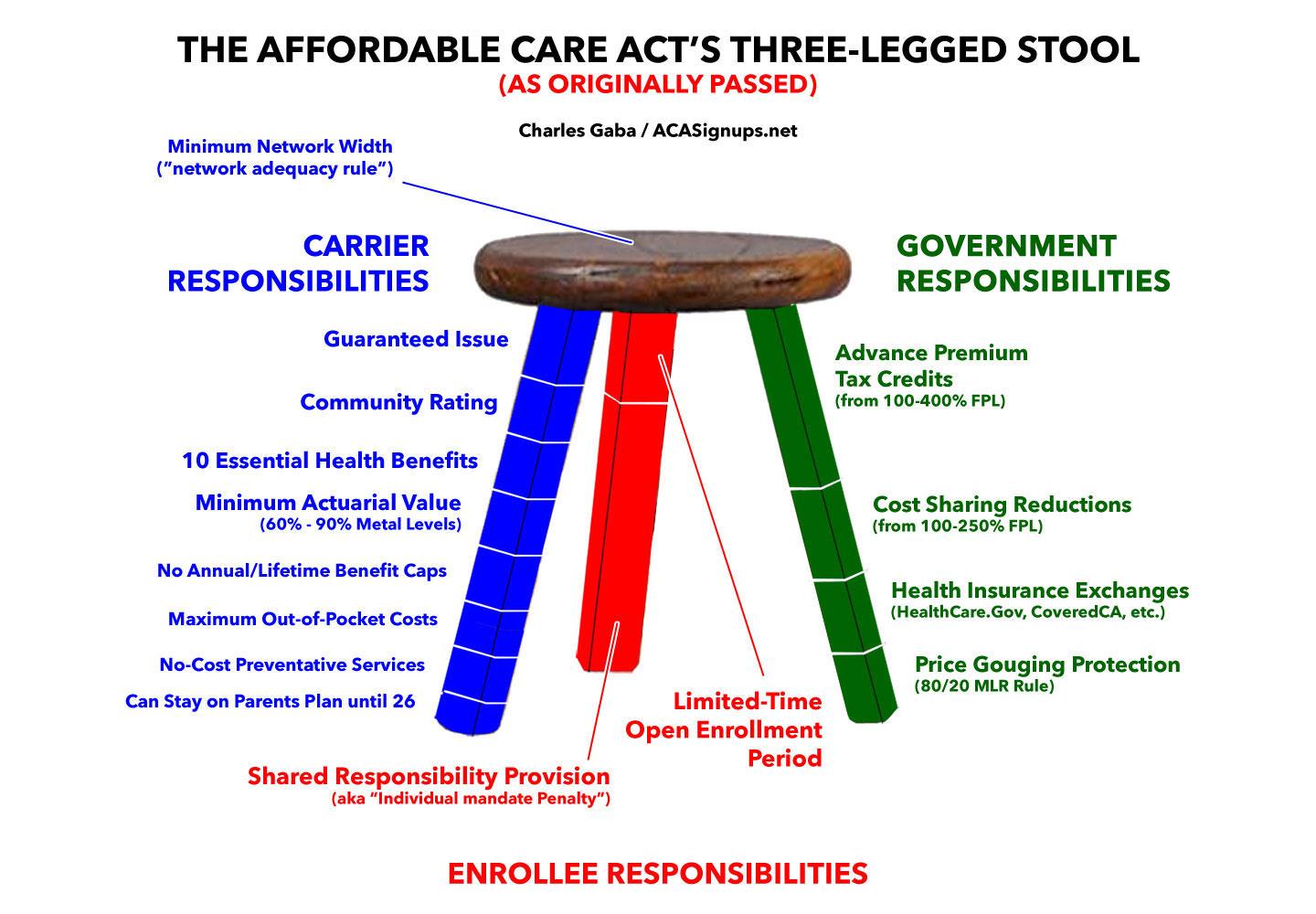 In December 2017, the Republican-controlled House and Senate passed the so-called "Tax Cuts & Jobs Act of 2017", signed into law by Donald Trump. One of the provisions of the bill was to change the amount of the ACA's individual mandate penalty from $695/person to $0/person (or from 2.5% of household income to 0.0%), like so: 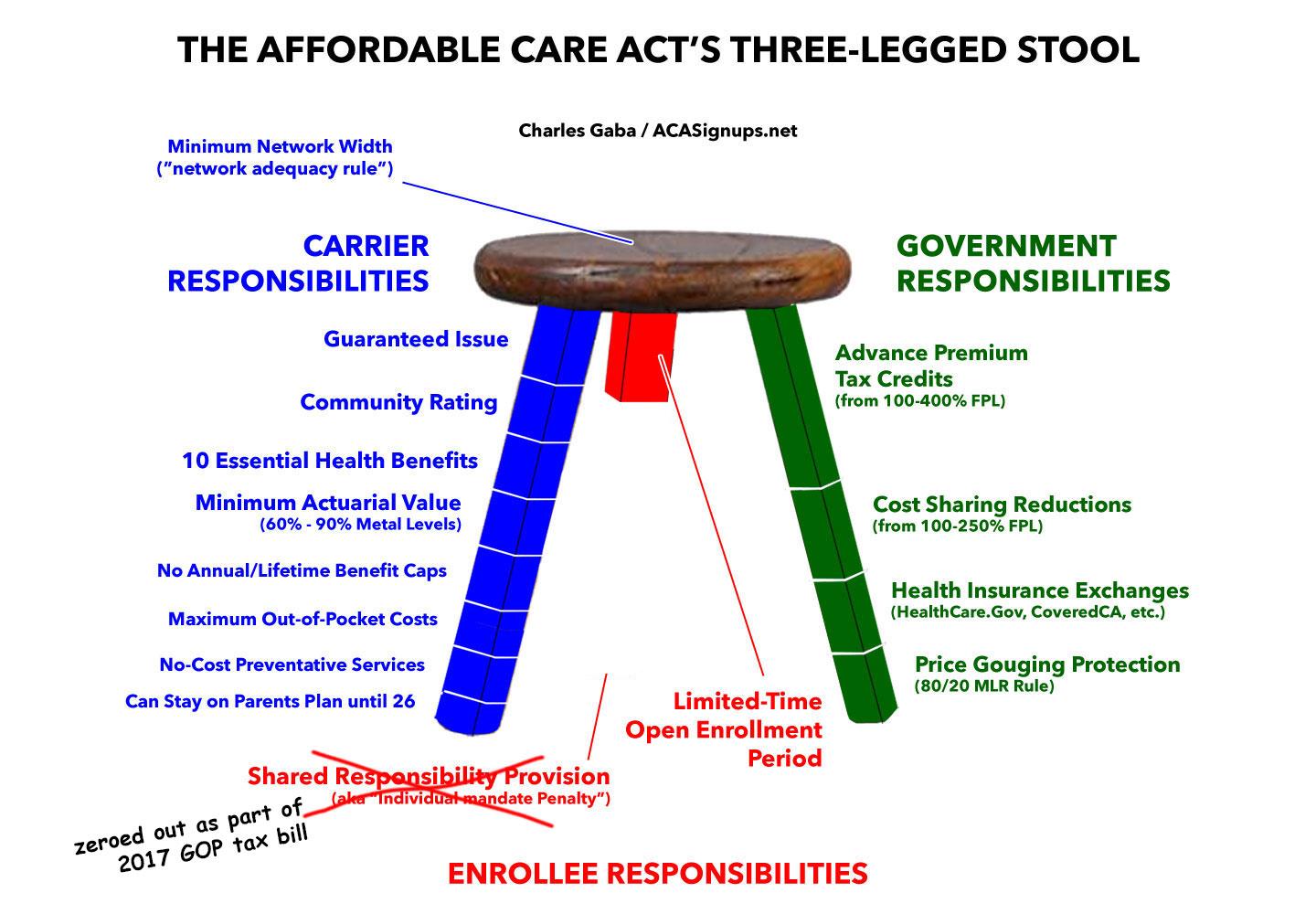 Two months later, in February 2018, the Republican Attorney General of Texas, along with about 20 other GOP state AGs, announced that they were suing to have the entire ACA struck down.

Their argument is incredibly stupid: They claim that because they (Republicans) cut off most of the red leg, that means, by definition, that they (Republicans) get to cut off the other two legs as well (along with throwing out the seat while they're at it).

Countless legal and Constitutional experts from across the ideological spectrum...including one of the architects of a previous attempt to strike down the ACA, the King vs. Burwell case, have tried to explain how batshit crazy this "logic" is to no avail.

Making this lawsuit even more absurd is that the red leg has already effectively been replaced anyway, with what I like to call the World's Most Expensive Shim®...in the form of around $5.2 billion/year in additional APTC subsidies being paid by the federal government each year to cover the ~$580/enrollee premium increase caused by the mandate penalty being zeroed out in the first place: 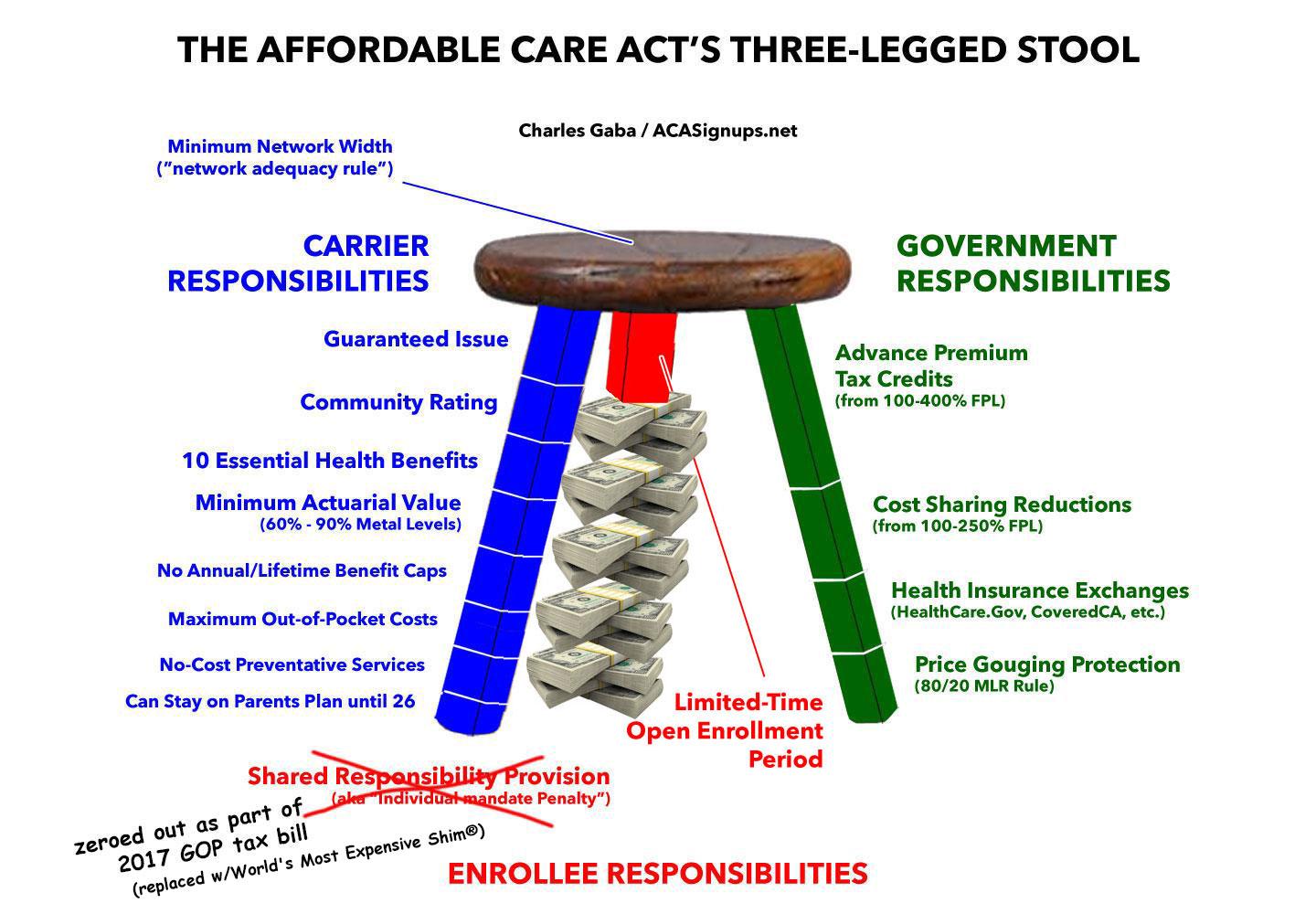 Making all of this even more absurd is that the individual mandate penalty has already been reinstated by four states (California, Massachusetts, New Jersey and Rhode Island) and the District of Columbia anyway, which means that it's still around for 17% of the U.S. population at the state level regardless.

There are several obvious solutions to this nonexistent "problem" claimed by the GOP plaintiffs:

Instead, Donald Trump, Attorney General William Barr (whose job is supposed to be to defend the law of the land), 20-odd Republican Attorneys General and every Republican officeholder who isn't opposing this lawsuit (which is to say, pretty much all of them) are calling for the entire ACA to be eliminated en masse...even provisions which have absolutely nothing to do with the Individual Mandate Penalty such as Medicaid expansion, which currently covers more than 14 million people (and likely more in recent months, given the 40 million Americans who've lost their jobs and the accompanying employer-sponsored healthcare coverage).

Put simply, Donald Trump and the Republican Party are dead set on stripping away healthcare coverage from 23 million Americans...in the middle of a deadly global pandemic which has already killed 125,000 of us and infected 2.5 million others.