Wisconsin: More bad news for the "It's an Urban/Democrat Problem" crowd...

Yesterday I had a lengthy post in which I noted that the claims by certain Republicans/"MAGA" types that the COVID-19 pandemic was limited to "blue" areas and "big cities" (wink, wink) is quickly unraveling...at least here in Michigan.

Today, I've run the numbers and put together similar Red/Blue and Urban/Rural breakouts for another extremely closely-watched swing state: Wisconsin.

For Michigan, I was able to separate out the City of Detroit itself from the rest of Wayne County. I also included the wider "Metro Detroit Area", which consists of both Oakland and Macomb County along with the part of Wayne County outside of Detroit.

I'm a lot less familiar with Wisconsin, and they don't break out Milwaukee separately anyway, so I went with Milwaukee County, Dane County (which includes the 2nd largest city in the state, Madison), and the Rest of Wisconsin. Here's what the breakout of COVID-19 cases has looked like over time. Once again, it's really only relevant after the state reached 100 cases: 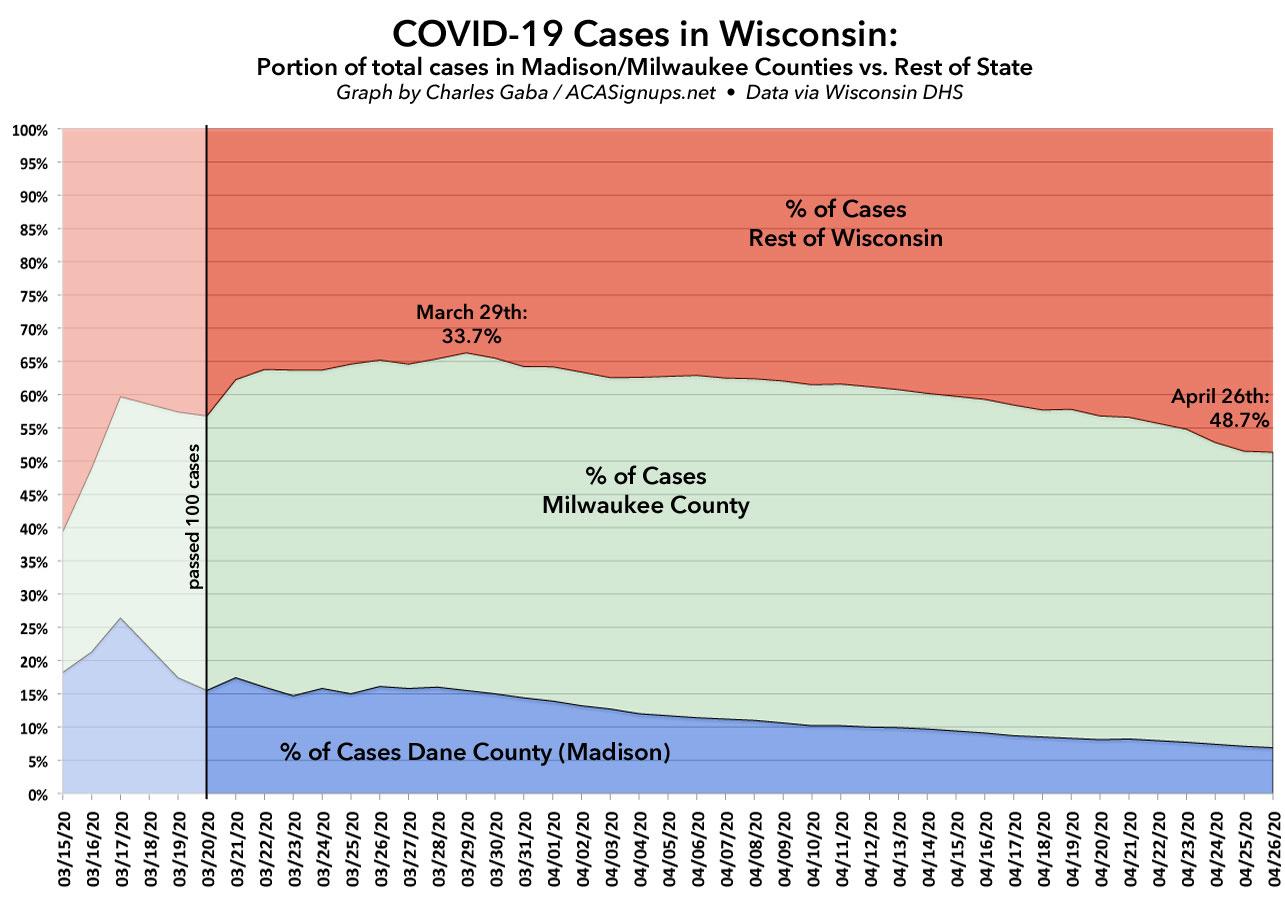 After holding steady at about 1/3 of all Wisconsin cases for the first week or so, rural Wisconsin (or at least "Not Milwaukee/Dane County" Wisconsin) has seen positive tests grow over the past month until it's now nearly a 50/50 split.

The same pattern can be seen at almost the same slope when I divide up the cases into Blue (voted for Hillary Clinton in 2016) and Red (voted for Donald Trump) counties: The Red counties have increased from 29% of all cases to nearly 45% in just 4 weeks: 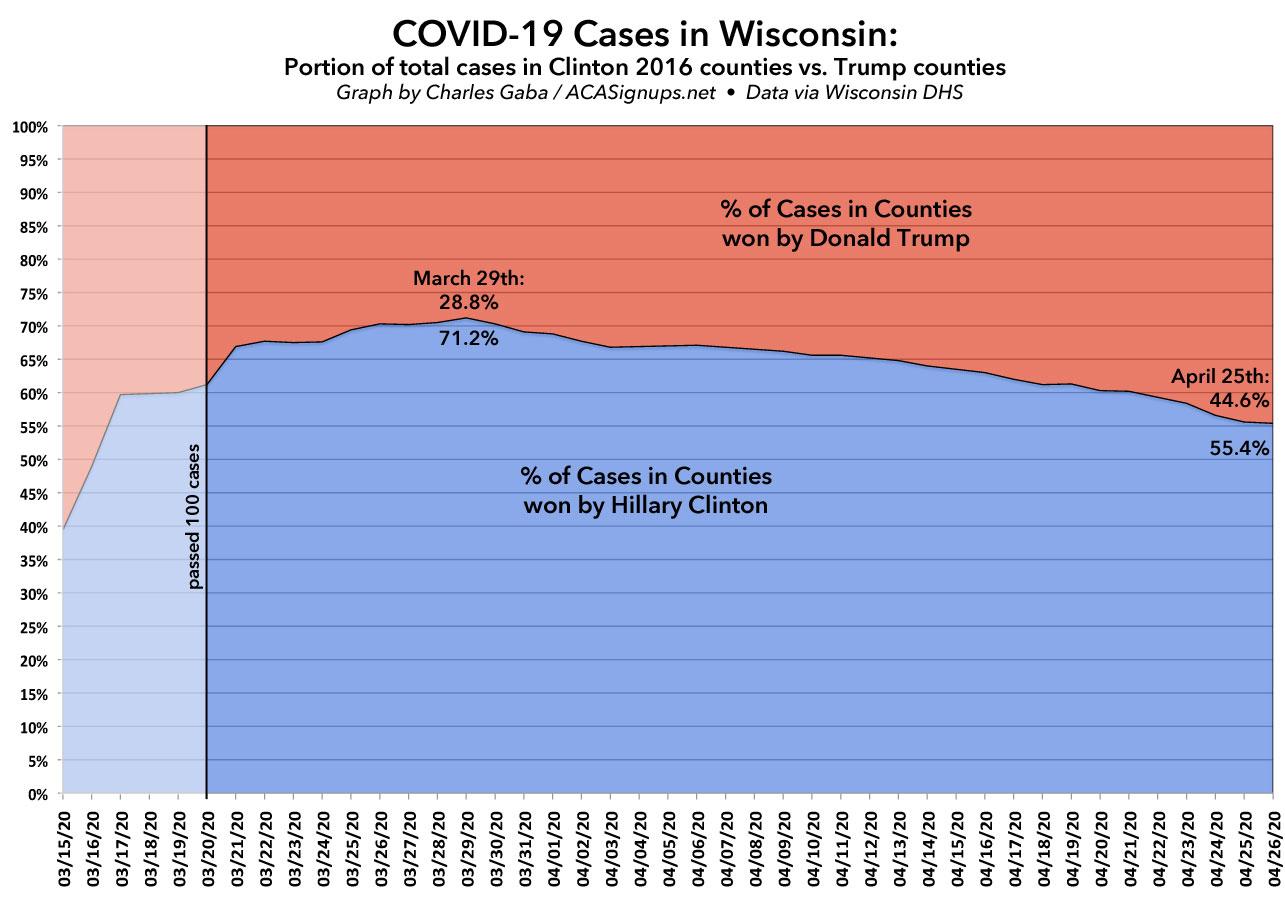 So what happens if/when the red/"not the city" parts of the state overtake the blue/"urban" sections in both total cases and even, potentially in cases per capita? Will the "Democrat Hoax" as Donald Trump put it finally be taken seriously by the MAGA crowd?

Meanwhile, here's the tables to accompany each graph: 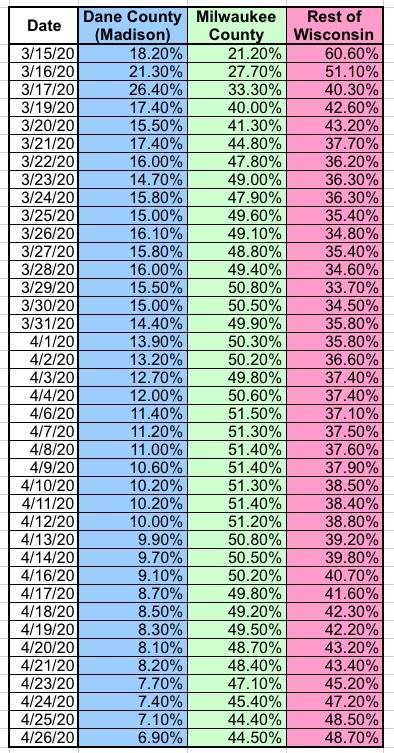