To get an idea of just how far things have come, here again is one of the old "Harry & Louise" TV ads which helped torpedo the Clinton Administration's universal healthcare overhaul bill over 25 years ago:

As I wrote a year and a half ago:

Matthew Martin also raised the point that he thinks flat community rating was pretty much standard for employer-sponsored insurance even 25 years ago...and of course it's never been an issue with Medicare or Medicaid. If so, that means that Louise is, once again, referring specifically to the individual market only. As always, the indy market is where most of the controversy has been for decades.

I was planning on spending most of last week writing up an in-depth, thoughtful retrospective about what the ACA means, how important it is, how much it's changed the national healthcare policy landscape of the United States. Unfortunately, instead I ended up spending most of last week constantly updating posts about the latest state-based exchange to announce a COVID-19 Special Enrollment Period.

In their own way, however, even these updates kind of made the same point.

Without the Affordable Care Act, over 20 million more low- and moderate-income Americans would find themselves either without any healthcare coverage whatsoever or, at best, with crappy junk "insurance" which wouldn't coverage them being tested for the Coronavirus, much less being treated for it.

In addition, without the ACA, millions of other Americans who are about to lose their employer-based healthcare coverage (or who already have) would find themselves in the same boat unless they were able to pay for the full price of those policies via COBRA...something which most of them are unlikely to be able to do since COBRA means their premiums would triple on average at the same moment that their income drops down to...well, potentially nothing whatsoever.

Instead, most of the newly-unemployed will find themselves eligible for either Medicaid thanks to the ACA's expansion provision or for heavily-subsidized ACA exchange policies, while tens of millions more who haven't/don't lose their coverage have the peace of mind knowing that if they lose their coverage, they'll also have the ability to retain decent coverage.

Saying the ACA "isn't perfect" is, admittedly, a pretty big understatement. It's clunky, it's complicated, it has a lot of holes which need to be filled and over the past decade has taken a lot of damage which needs to be repaired.

Many of its flaws were inherent in the law from the beginning, such as the Subsidy Cliff, the Family Glitch, the Skinny Plan Glitch and so on. Some were due to mismanagement by the Obama Administration or state officials, such as the technical problems when HealthCare.Gov and some of the state-based exchange website launched. Some of this was due to sabotage and obstruction by Republicans at the federal and state level...either prior to Donald Trump (the refusal of most GOP-run states to expand Medicaid and the Risk Corridor Massacre) or since then (zeroing out of the mandate penalty, cutting off of cost sharing reduction payments, etc). 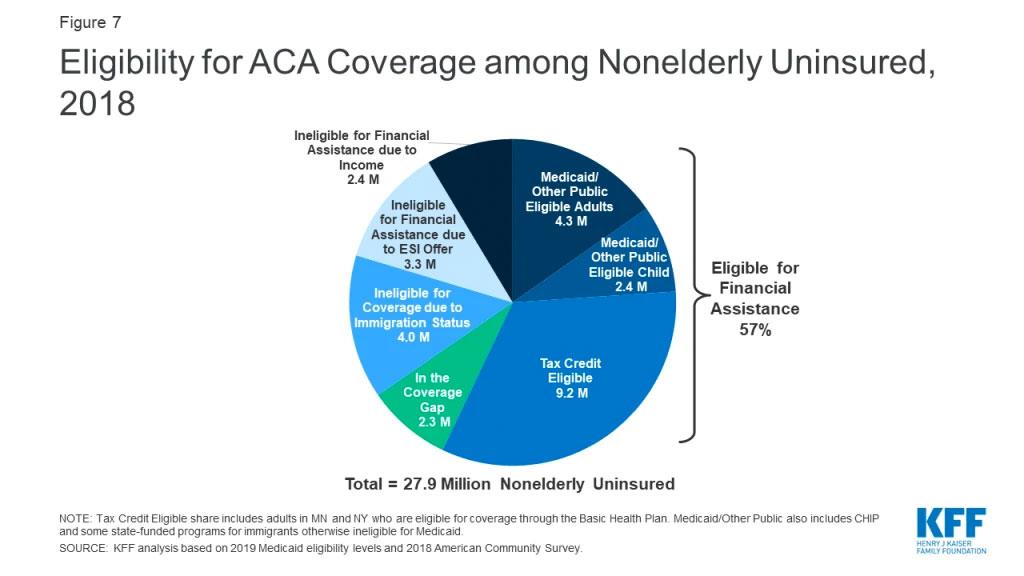 As a result of these and for other reasons, about 2.3 million Americans are still caught in the Medicaid Gap, while another 2.4 million earn too much to be eligible for ACA subsidies (but not enough to be able to afford private policies without them). 3.3 million aren't eligible for ACA subsidies because they have an "offer" of employer coverage...except due to the Family Glitch or Skinny Plan Glitch, those "offers" are worse than useless. Four million aren't eligible for either Medicaid or subsidized coverage due to their immigration status.

The thing is, however, a few technically simple (if politically problematic) fixes to the ACA could easily provide decent healthcare coverage to an additional 12 million people...while the remaining 16 million uninsured are apparently already eligible for at least some level of financial assistance. The problem there is that either they don't know they qualify, the process is too confusing, or in the case of those who are tax credit-eligible, the subsidies still aren't generous enough to make the coverage affordable.

There are two "suite" bills already on the table, one in the House (H.R. 1884), one in the Senate (S.1213) which would instantly resolve the vast majority of the ACA's bugs and shortcomings. It's time to combine their provisions and pass them both.

Meanwhile, of course, the Trump Administration is still, against all decency and sanity (especially in the midst of a deadly global pandemic), supporting the asinine #TexasFoldEm lawsuit which could result in the entire ACA being struck down, completely devastating the already-chaotic healthcare system...with absolutely nothing to replace it:

Trump reaffirms that his administration will go forward with lawsuit to end the Affordable Care Act: "what we want to do is terminate it" and replace it with something better.