In short, back in 2019, insurance carriers bumped their premiums up by around 2-3% more for 2020 than they otherwise would have because they thought that the HIT would still be collected...only to have the tax repealed later on last year. As I noted, while the details get a bit confusing about how exactly the timing of the taxes work in regards to the year they're collected vs. the year that the revenue was generated, the bottom line is that it appears that upwards of $15.5 billion in taxes for calendar year 2020 will not be collected by the IRS.

This means that insurance carriers are effectively looking at around $15.5 billion more in revenue this year than they were expecting. If nothing changes, a big chunk of that money is gonna end up in their pockets in the form of additional profits, while another big chunk will eventually be returned to many of the policyholders themselves in the form of Medical Loss Ratio rebates.

While I'm all for enrollees getting some of their money back, due to the complexities of how the MLR provision works, it's not necessarily the most equitable or efficient arrangement. Some people who didn't qualify for any financial assistance at all won't see a dime, while some of those who are enrolled in heavily-subsidized policies could end up actually unintentionally profiting from the program, which it wasn't really intended to do.

FORTUNATELY, at least a couple of states are pouncing on this golden opportunity...and one in particular, New Mexico, is all over it:

As the article notes, not all of the just-repealed federal tax would be replicated at the state level; that's because some of the federal HIT applied to federally-funded programs. According to this Oliver Wyman analysis, for 2020, New Mexico carriers tacked on around $182 million in additional premiums to cover the Health Insurer Tax which will no longer be collected by the IRS. Of that, it breaks out as follows:

As it was explained to me, of these categories, only the Indy, Group markets and Medicaid market portion of the tax can be put into effect by the states. New Mexico's additional premiums in those categories is around $147 million total, but only around $125 million of that is the actual tax itself; thus, the $125 million figure cited in the article.

Here's a flyer which goes into some detail on the bill. The first page explains the basic concept and the timing urgency... 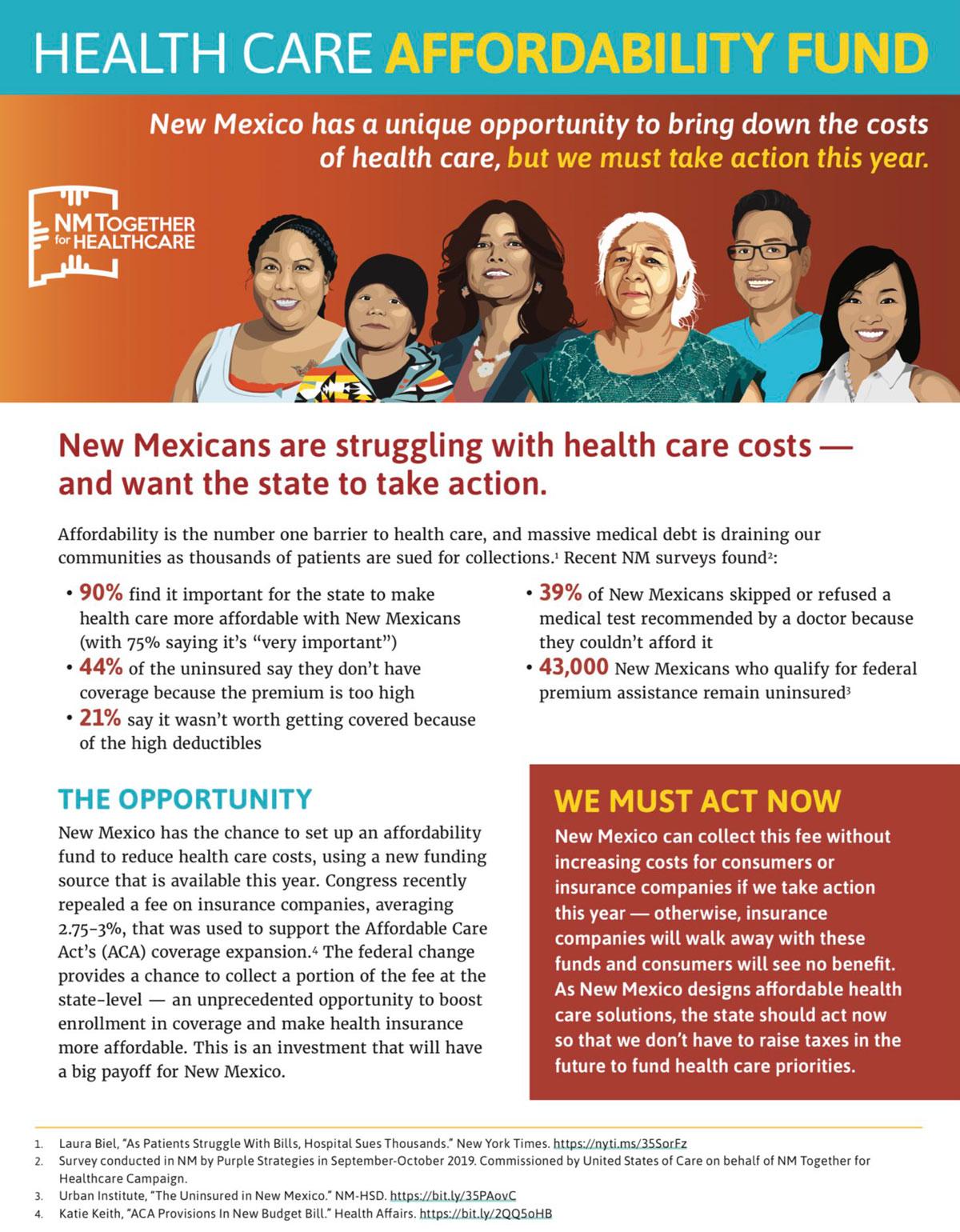 ...while the second page explains how it would work and where the money would go: 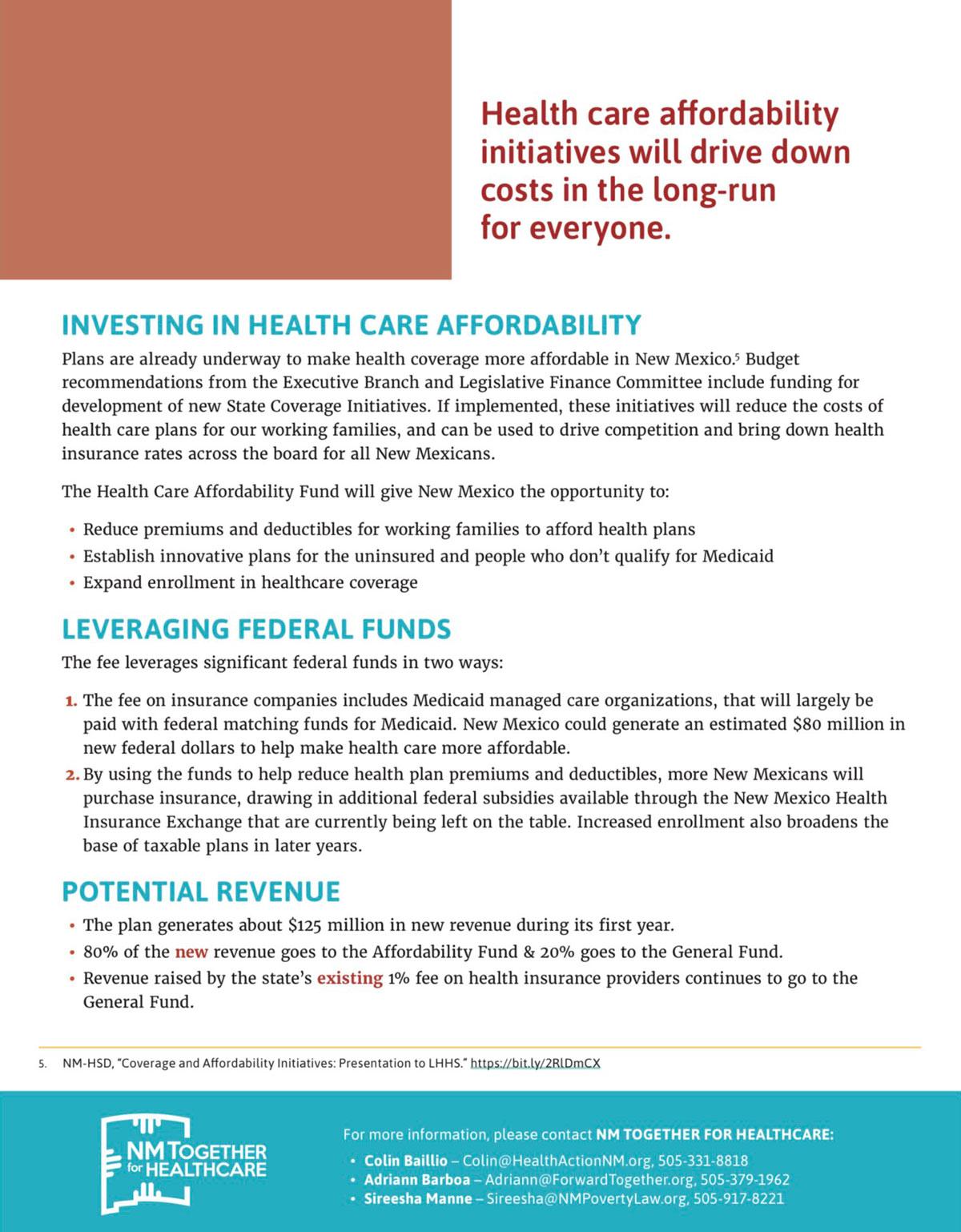 In New Mexico's case, they note that due to the high federal match rate of their Medicaid program (around 73%) , a whopping $80 million of the new revenue (about 64% of the total) would effectively come from the federal government. They also intend to put 80% of the new revenue (around $100 million) into their new "Affordability Fund", while the other 20% ($25 million) would go into the state's general fund.

The second point under "Leveraging Federal Funds" is also really important to keep in mind:

"By using the funds to help reduce health plan premiums and deductibles, more New Mexicans will purchase insurance, drawing in additional federal subsidies available through the New Mexico Health Insurance Exchange that are currently being left on the table. Increased enrollment also broadens the base of taxable plans in later years."

Let's walk this through a bit.

That means that in 2020, New Mexico ACA market policies will generate roughly $380 million in premiums.

Assuming premiums stay flat in 2021 (which is a distinct possibility given the trendline of the past year or two), and assuming similar total enrollment, that means that this fund should be able to generate enough to cover 26% of total unsubsidized premiums, depending on how it's allocated.

Remember, however, that not all $380 million of those premiums are being paid by the policyholders--in New Mexico, around 78% of on-exchange enrollees (roughly 44% of all ACA individual market enrollees) already receive federal APTC subsidies, averaging around $393/month. That's upwards of $133 million in federal subsidies already being subtracted from that $380 million.

In other words, New Mexico ACA residents are actually paying around $247 million in premiums per year for their policies. This could cut that down by another 40% or so. Again, it's all about how they utilize the revenue.

Lopping premiums down by that much will almost certainly lead to a dramatic increase in ACA exchange enrollment, which in turn will generate more revenue for the insurance carriers and more revenue for the state to tax, which in turn will generate more funding for the program itself, and so on (obviously there's a limit to how many New Mexicans would sign up since eventually you run out of people in need of insurance).

As for what they plan on doing with the $100 million Affordability Fund, there's any number of possibilities, as noted in the legislative text:

B. The purpose of the fund is to provide initiatives to reduce the cost of health care coverage for New Mexico residents, such as costs of premiums and cost-sharing, for health care plans through the New Mexico health insurance exchange and coverage programs through the department. Money in the fund shall not be used to pay for state contributions toward the medical assistance program established pursuant to Titles 19 and 21 of the federal Social Security Act. If a provision of the federal Patient Protection and Affordable Care Act is repealed and the repeal affects coverage for New Mexico residents, the fund may be used to maintain that coverage, as provided by law.

Stan Dorn of Families USA provides a bit more detail on the specifics of the bill and the fund:

Under the bill, revenue will go to a “health care affordability fund,” to “provide initiatives to reduce the cost of health care coverage for New Mexico residents, such as costs of premiums and cost-sharing.” At least 60% of these funds must be used to help low-wage workers and their families who qualify for federal premium tax credits. The Human Services Department will send the Legislature final recommendations for such affordability initiatives by December 1, 2020.

According to Dorn, New Mexico was inspired by a couple of other states:

New Mexico’s legislation builds on previous work done in other states. When the federal health insurance assessment was temporarily suspended for 2019, Maryland and Delaware enacted state assessments that took the federal assessment’s place. Both initiatives used the revenue to finance reinsurance payments to insurance companies. Maryland lawmakers have since introduced legislation that would let some of the money be used to provide consumers with affordability assistance. New Mexico’s bill is the first in the nation that captures the ongoing revenue offered by the federal government’s permanent phase-out of the health insurance assessment and that focuses the resulting resources to help state residents in need.

Regular readers know that I've been cheering on ACA Section 1332 Reinsurance waivers for the past couple of years as a way of reducing unsubsidized premiums...but the truth is that there's a big downside to them as well, which was explained in a joint post by myself and three of my healthcare wonk colleagues last week. Offering direct supplemental subsidies to enrollees helps more people in more need, and if it's done the way that California is, it can actually turn some of those unsubsidized enrollees into subsidized ones at the same time.

In fact, direct subsidies can even have the effect of reducing unsubsidized premiums to some degree as well! Massachusetts, which offers their own supplemental subsidies to lower-income enrollees only, has the lowest unsubsidized premiums in the country for ACA policies for the 7th year running this year. Part of the reason is that the reduced premiums bring in a lot more enrollees who otherwise wouldn't be sick enough to feel a need to pay higher premiums, which means a healthier risk pool, which in turn means lower premiums across the board.

I still think they should go the California route myself, however; CA is doing a bit of both...they're enhancing subsidies for those earning 200-400% FPL but also expanding them to those earning 400-600% FPL at the same time.

In any event, this is a fantastic idea, and more states should jump onboard. Time is of the essence, however. Technically, there's nothing stopping a state from passing a bill like this of their own at any time, but politically, it's a lot easier sell to do this this year, when there's already millions of dollars in funding ripe for the taking, as opposed to waiting until next year.

UPDATE: Unfortunately, while the bill easily passed the state House 41-25, I just received some bad news from Colin Baillio:

Some disappointing news to share: it sounds like HB 278, the Health Care Affordability Fund, won’t get a hearing in Senate Finance. We hoped to at least have the opportunity to present our case. I’ll have thoughts to share soon, but for now just want to say some thank yous.

The biggest thanks is to all of the amazing families from across the state who make up @NMT4HC. They showed up every day and opened up about the real struggles people face every day when they try to get the health care they need. I am so grateful to every single one of them.

Huge thanks to @NMRepArmstrong, @lizthomsonnm, and @JavierForNM for fighting so hard to seize the opportunity to make health care more affordable for New Mexicans. And to @GovMLG for giving us a chance to advance this dialogue during the budget session.

Thanks to all the legislators who supported our efforts and even to those who disagreed but listened with an open mind.

And lastly, I still very much believe in this idea and hope other states take up the opportunity. If you’re in another state and want to undertake a similar effort, please reach out to me.

Thanks to everyone who fought for this. Let’s keep pushing!