Approximately 8.3 million people selected or were automatically re-enrolled in plans using the HealthCare.gov platform during the 2020 open enrollment period.

These snapshots provide point-in-time estimates of weekly plan selections, call center activity and visits to HealthCare.gov or CuidadoDeSalud.gov. The final snapshot reports new plan selections, active plan renewals and automatic enrollments. It does not report the number of consumers who paid premiums to effectuate their enrollment.

While the semi-official report was released back on December 20th, there's always some last-minute additions and subtractions which have to be cleaned up before the dust settles on the final numbers:

As a result of these factors, the final official total came in at around 17,000 lower than the unofficial total, or 8.29 million in the end: 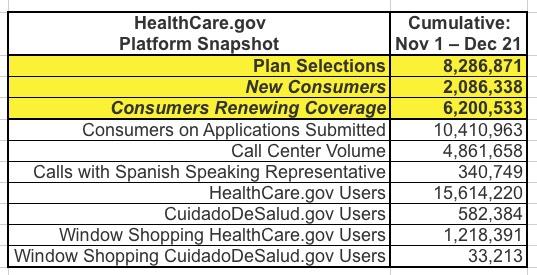 Here's how it broke out for each week, including the final "cleanup" period, including comparisons for each with the 2019 Open Enrollment Period (click image for high-res version):

There were around 24,000 additional enrollees added for the first two reasons noted above, but these were more than cancelled out by the 41,000 people who were dropped from the list. It's noteworthy that the 41,000 was still fewer than last year's 43,000 dropped enrollees. Overall, there were half as many additions (24K vs. 46.5K), but also less than half as many drops (41K vs. 90K)...which means that the final total actually dropped less than it did last year.

As a result, HC.gov ends the 2020 Open Enrollment Period down just 1.5% from last year...and it's actually just 0.5% when you take into account Nevada splitting off onto their own state-based exchange.