After writing about the newly-signed laws in Georgia and Ohio banning virtually all abortions after 6 weeks (when most women don't even know they're pregnant), even in most cases of rape, incest of the health of the mother, I didn't think that a story about abortion-related legislation could get more horrific and insane.

A new Ohio bill would ban most private insurance coverage for abortions. Opponents say it would also ban effective methods of birth control.

One-fifth of representatives in the House, all Republicans, have signed onto House Bill 182 sponsored by state Rep. John Becker (R-Union Twp.) that would prohibit most insurance companies from offering coverage for abortion services.

“The intent is to save lives and reduce the cost of employers and employees health care insurance," Becker says.

The bill would ban nontherapeutic abortions that include "drugs or devices used to prevent the implantation of a fertilized ovum.”

Becker says the bill also speaks to coverage of ectopic or tubal pregnancies where the fertilized egg attaches outside of the womb.

“Part of that treatment would be removing that embryo from the fallopian tube and reinserting it in the uterus so that is defined as not an abortion under this bill," Becker explains.

First of all, there's the whole "banning abortion coverage from private insurance" bit, which goes way beyond the Hyde Amendment or any state-level equivalent. This is private insurance, not taxpayer funded health coverage. This basically amounts to forcing women to take out Rape Insurance, which is...actually similar to something Michigan Republicans did in 2014. And no, the bill in question, HB 182, does not include exceptions for rape or incest...in fact, it looks like it removes existing exceptions: 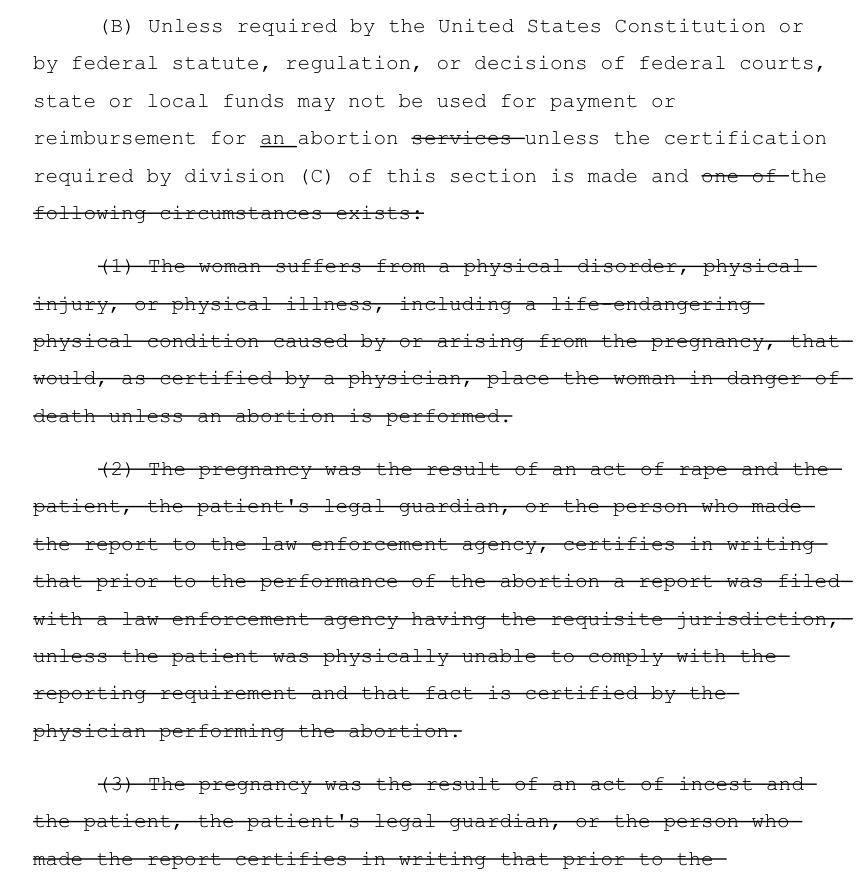 But...as horrifying as that is, let's set that aside for the moment.

Then, there's the "banning drugs or devices used to prevent the implementation of a fertilized ovum"...which includes IUDs, birth control pills, Implanon and so forth.

You know...common types of birth control.

But let's set that aside for the moment.

Let's focus on the last bit: "removing the embryo from the fallopian tube and reinserting it into the uterus":

“That doesn’t exist in the realm of treatment for ectopic pregnancy," argues says Jaime Miracle, deputy director of NARAL Pro-Choice Ohio. "You can’t just re-implant. It’s not a medical thing."

The bill "would also ban effective methods of birth control" and require re-implantation of ectopic pregnancies into the uterus, a medical procedure that doesn't exist.
https://t.co/ptX8vMBOwM #OHLeg #StopTheBans

But I'm sure GOP Rep. John Becker of Union Township is a doctor of obstetrics and gynecology, or at the very least a trained medical professional, right?

“When you get into the contraception and abortifacients, that’s clearly not my area of expertise, but I suppose, if it were true that what we typically known as the pill would be classified as an abortifacient, then I would imagine the drug manufacturers would reformulate it so it’s no longer an abortifacient and is strictly a contraceptive," Becker says.

UPDATE: From the new Guardian story in November:

A bill to ban abortion introduced in the Ohio state legislature requires doctors to “reimplant an ectopic pregnancy” into a woman’s uterus – a procedure that does not exist in medical science – or face charges of “abortion murder”.

This is the second time practising obstetricians and gynecologists have tried to tell the Ohio legislators that the idea is currently medically impossible.

...An ectopic pregnancy is a life-threatening condition, which can kill a woman if the embryonic tissue grows unchecked.

...“There is no procedure to reimplant an ectopic pregnancy,” said Dr Chris Zahn, vice-president of practice activities at the American College of Obstetricians and Gynaecologists. “It is not possible to move an ectopic pregnancy from a fallopian tube, or anywhere else it might have implanted, to the uterus,” he said.