There's a ton of junk plans and scam artists out there, especially these days. Fraudulent plans are being hawked endlessly via both robocalls, spam emails and fly-by-night websites. If you're enrolling online, make sure to use one of the official ACA exchange websites...

There are also authorized 3rd-party web brokers you can use...but some of these also sell non-ACA compliant plans. The only 3rd-party broker which I'm aware of which only sells on-exchange ACA-compliant policies is HealthSherpa. Full disclosure: I have a banner ad agreement with them.

However, it was the next paragraph which put me into a panic:

Consumers looking at their health insurance options on the website for the federal marketplace, called healthcare.gov, can also click a tab entitled "short-term plans"...

WHOA!! This would be...not good at all. It's one thing to "encourage" people to consider #ShortAssPlans as an alternative if they absolutely can't afford an ACA policy...but actually selling them on the ACA exchange website itself is very non-kosher. It completely defeats one of the main reasons for having dedicated ACA exchange sites in the first place. The whole point is to have an official site where you can be absolutely certain that any policy you enroll in is required to be fully ACA-compliant, including all of the protections mandated by the ACA itself.

I poked around HealthCare.Gov to see this "short-term plan tab", but wasn't able to find it. Sure enough, shortly after this, Ms. Abutaleb made a small but important correction to that sentence:

Consumers looking at their health insurance options on the website for the federal marketplace, called healthcare.gov, may be redirected to other enrollment sites, some of which allow consumers to click a tab entitled “short-term plans” and see a list of those plans, often with significantly cheaper premiums. Short-term plans were once barred from the exchanges because they were considered inadequate coverage and do not meet the insurance requirements laid out under the Affordable Care Act. If consumers select a short-term plan, they are directed to call a phone number to finish signing up, according to screenshots provided to The Post.

OK. That's not the same thing...although it does still raise some serious concerns.

Critics say that both the sale of short-term plans through private brokers and consumers’ ability to select such plans directly on the marketplace website are the latest examples of Trump administration efforts to weaken the ACA after failing to repeal and replace the law in Congress.The president has repeatedly contended that short-term plans provide “relief” from expensive individual market insurance plans that are unaffordable to many consumers. The rule allowing the sale of such plans was finalized late last year, just weeks before open enrollment, so this is the first year they are widely available.

Again, it's important to clarify that you can't actually select short-term plans on the website. Here's what she's actually talking about.

If you visit HealthCare.Gov and roll over the "See Topics" tab, you'll see "How to Apply and Enroll"... 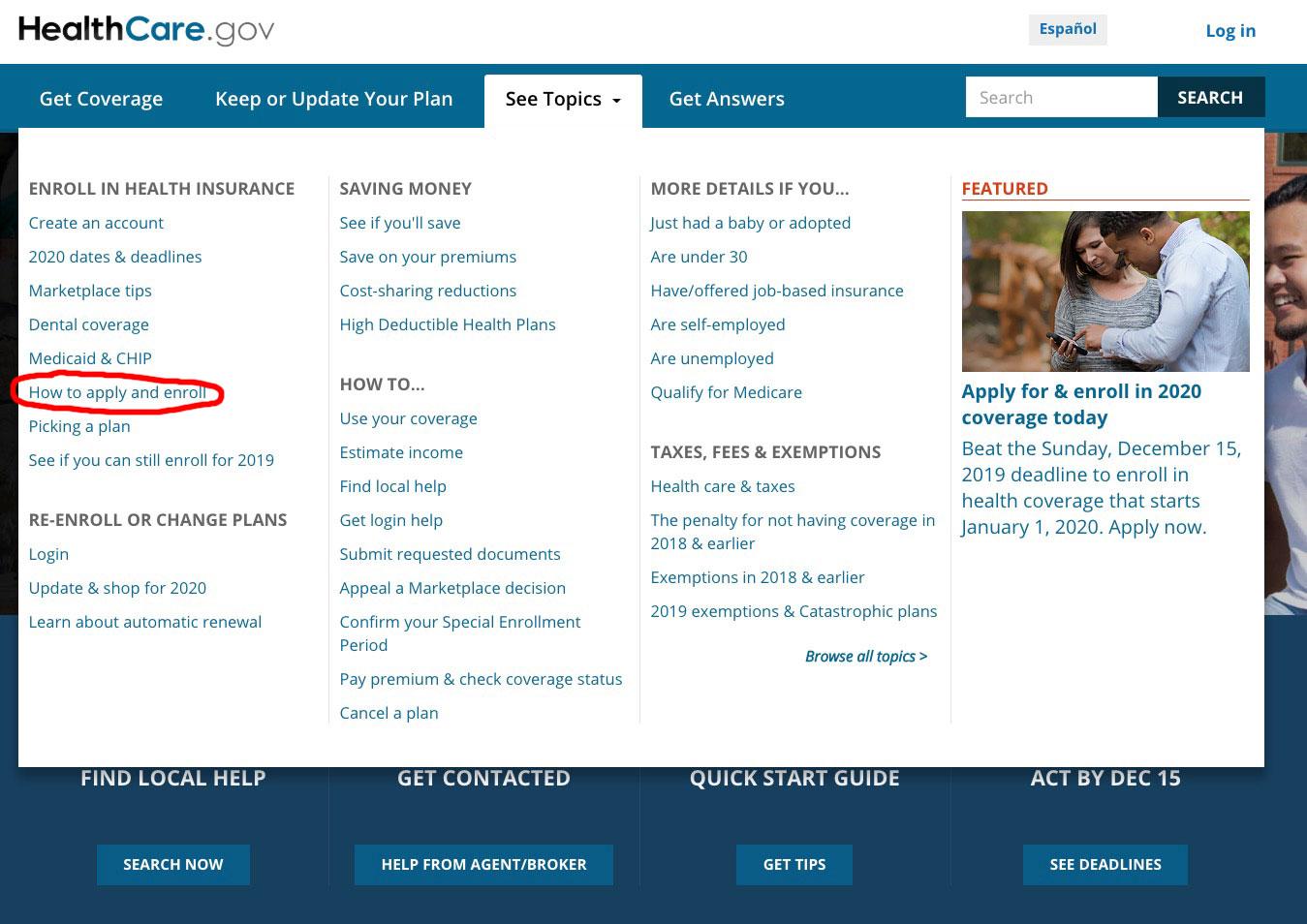 Clicking that link takes you to this page. Notice how the first option listed is to "Contact an agent, broker or assister". The second option is to "Have an agent or broker contact you". The third option is to "Use a certified enrollment partner's website".

It's not until the fourth option--which may not even fit on the screen depending on your browser window size--that you see what should be listed first or at least second: "Use HealthCare.Gov to apply online". This is already concerning...they're promoting 3rd-party "partner" sites over the actual, official website you're already on to begin with. 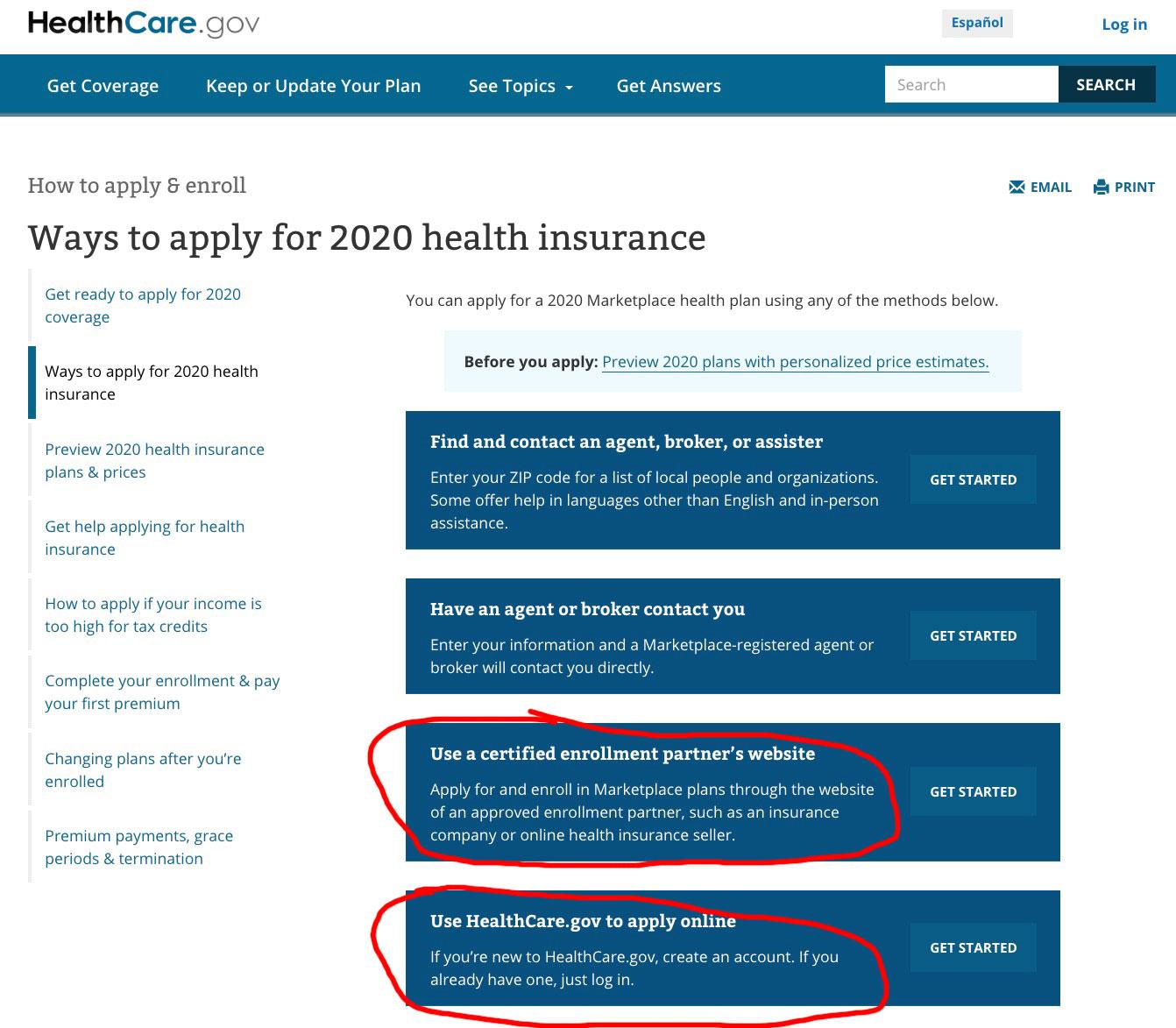 When you click on "Certified enrollment partner sites", you're taken to this screen. To be fair, it does provide the caveat that these are indeed 3rd-party sites...but it still muddies the water quite a bit for those who aren't familiar with all the nuances and details of how either the ACA or website links work: 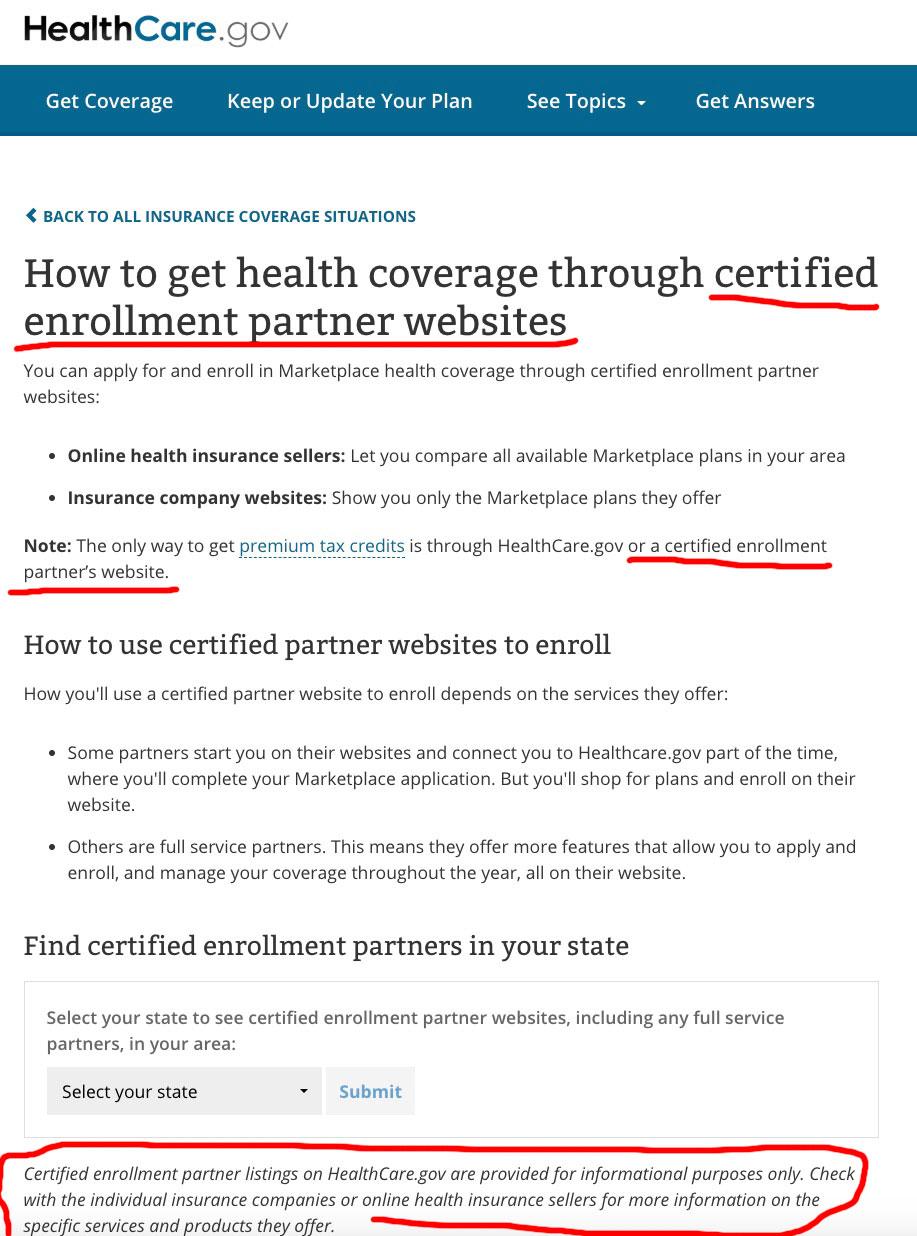 I live in Michigan, so I plugged that in and got the following list. Among others, it includes HealthSherpa, which, full disclosure, advertises on this website because they ONLY sell on-exchange ACA-complian policies, they list ALL of them, and they don't promote one carrier over another. They're about as close to the official HC.gov as you can get.

It also, however, lists a bunch of other website links...some of which go directly to individual carriers (which only list their own policies, of course), as well as other 3rd-party brokerages, such as GoHealth... 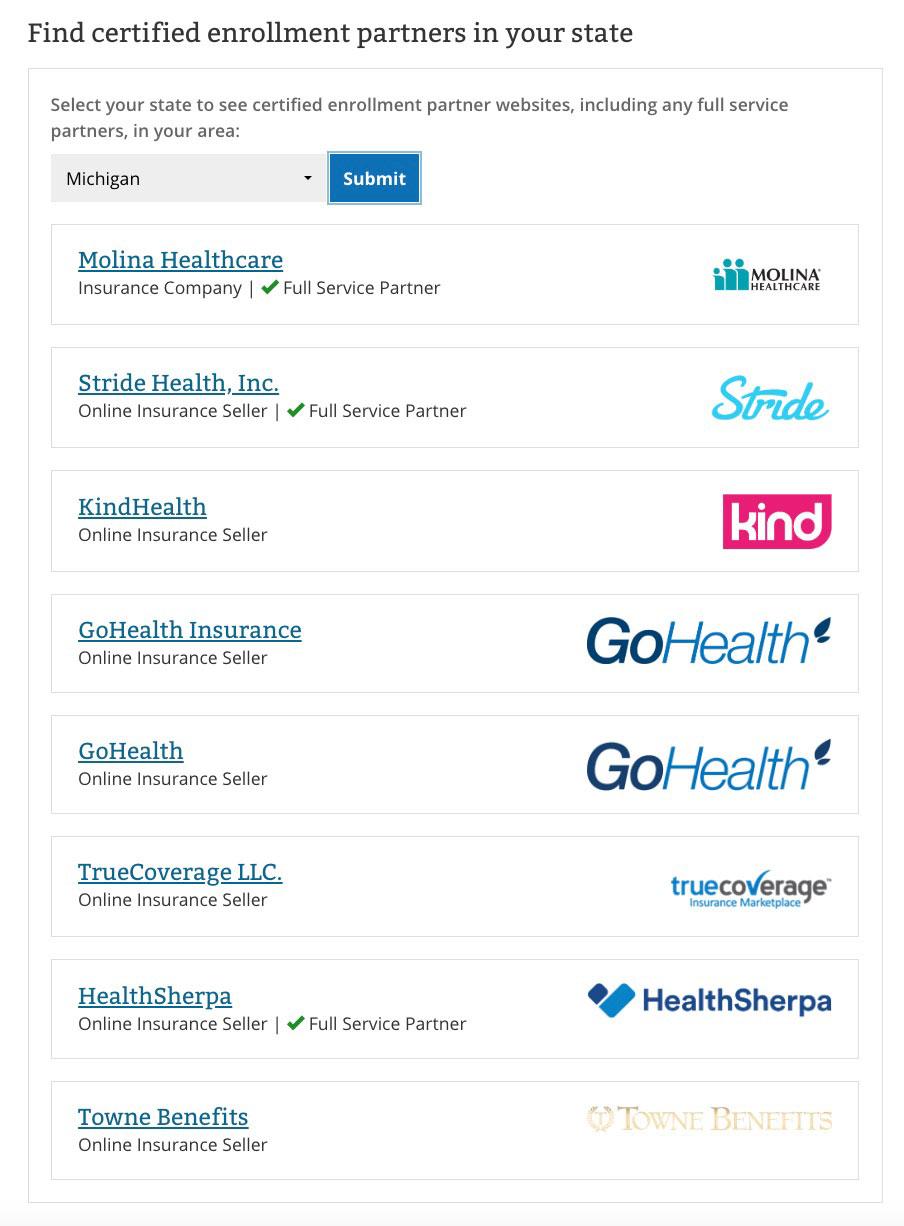 ...some of which don't stick to ACA policies specifically.

I'm gonna use GoHealth as an example here. First, clicking on the link doesn't take you to their regular home page...instead, it takes you to a more generic "portal" page where you're immediately asked to plug in your information: 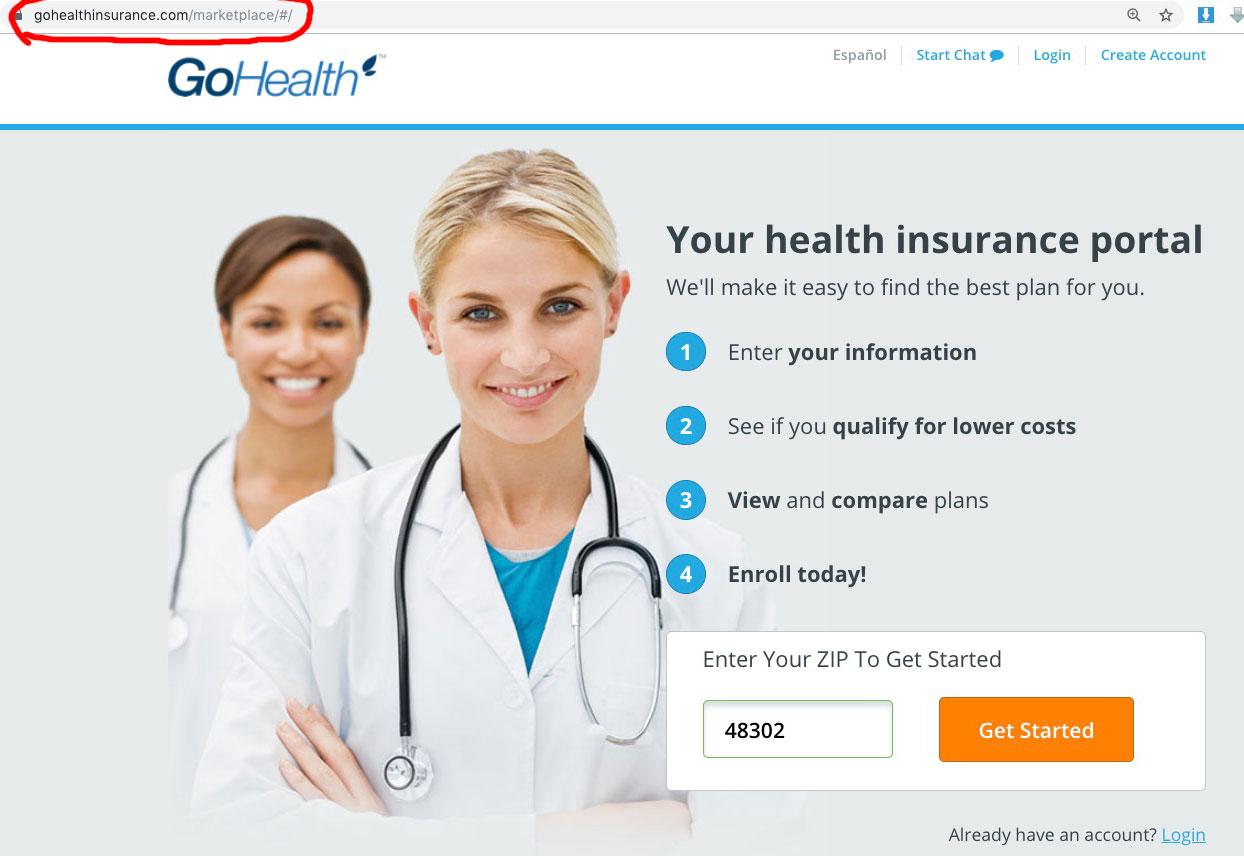 When you're done entering your information, you're taken to a results page which is, of course, very similar to HealthCare.Gov, listing the various ACA-compliant policies. HOWEVER, it also does indeed include some additional tabs for non-ACA policies: 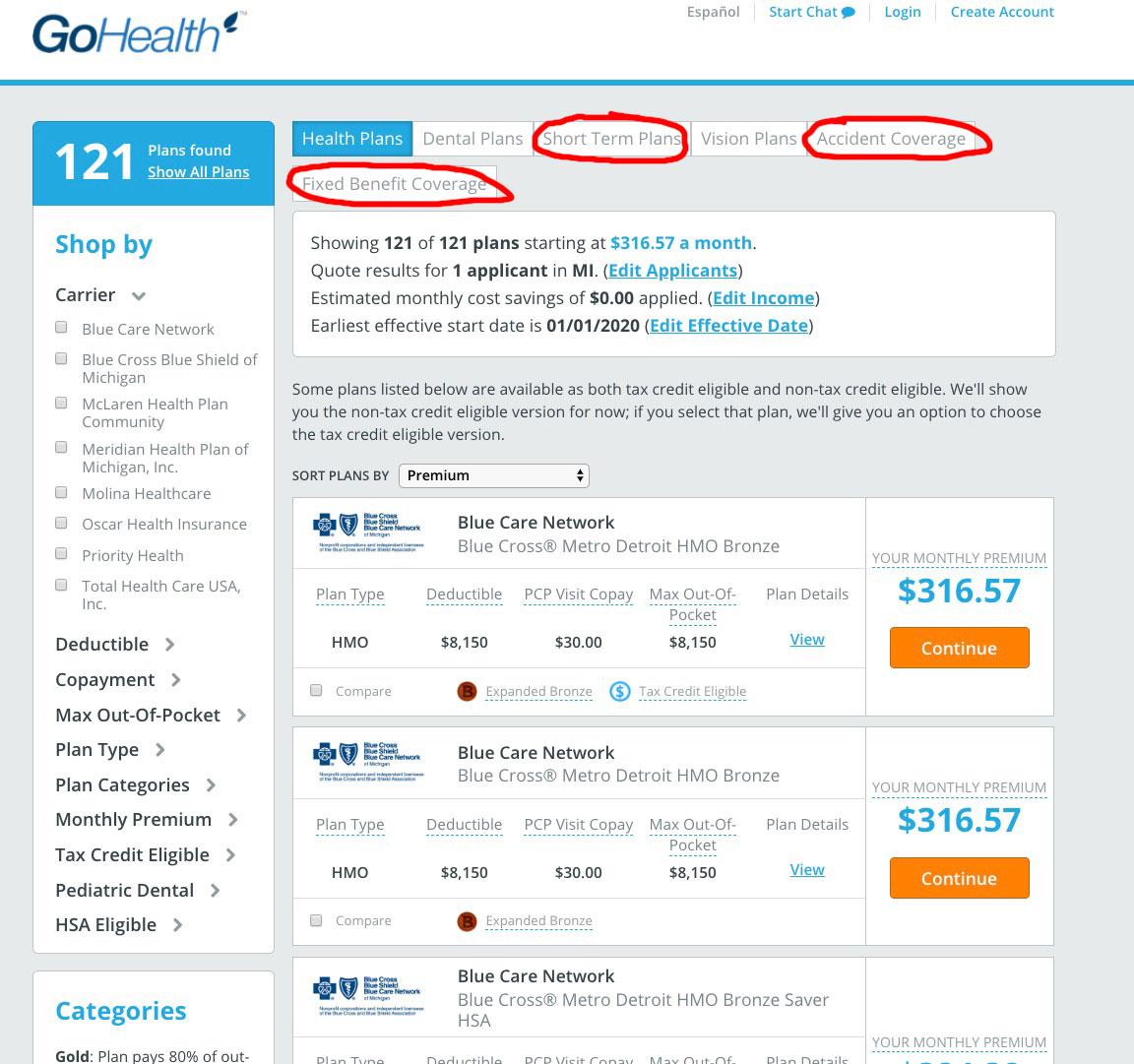 ...and when you click on one the "Short-Term Plan" link, you're of course given a list of policies from insurance carriers most people have never heard of, offering plans which on the surface appear to be much less expensive: 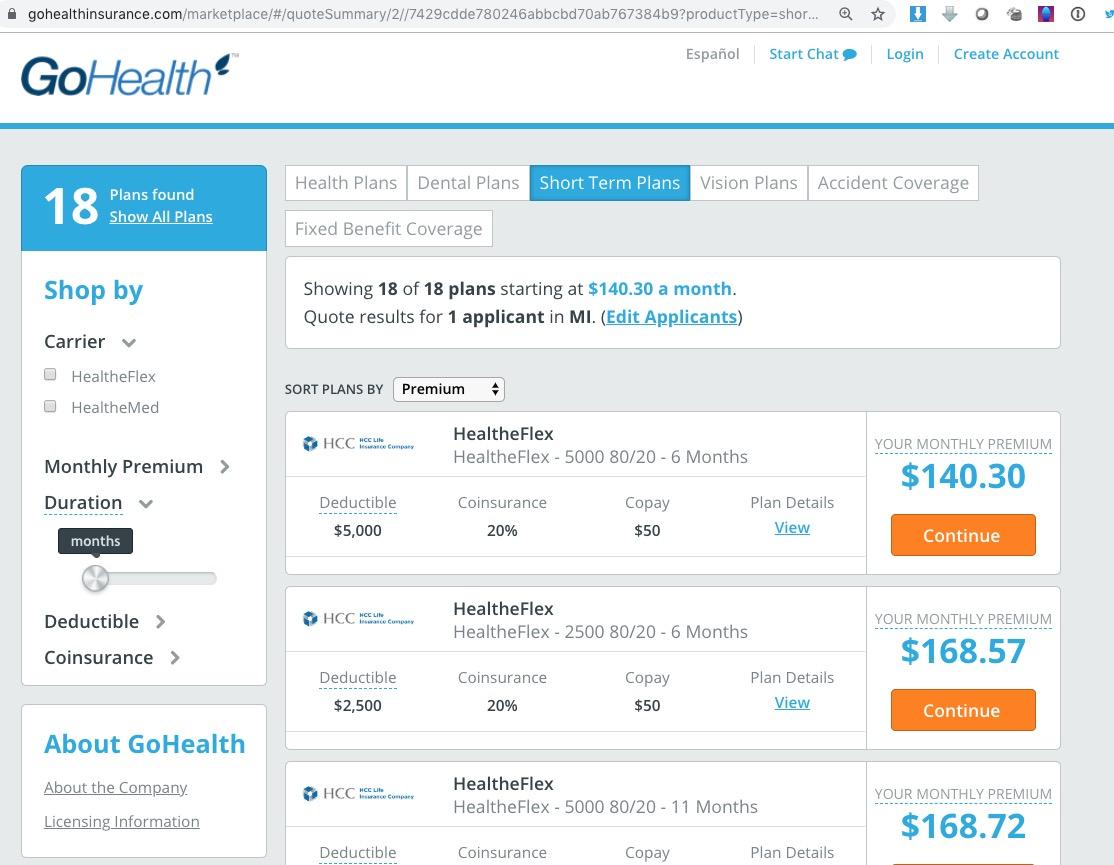 The problem, of course, is that while "short-term" plans and other non-ACA compliant policies may indeed have lower premiums, they also aren't required to include almost any of the same patient protections as ACA policies.

That often means huge gaps in coverage, lots of fine print, loopholes, non-covered conditions, non-covered services, and of course the fact that they can kick you to the curb altogether if you don't qualify via their medical underwriting requirements.

Someone visiting HealthCare.Gov should be able to expect and trust that any healthcare policy they enroll in "via" that website is fully ACA-compliant. That's the whole point of the site in the first place.

Now, it's true that these policies aren't technically being sold on HC.gov (and thank God for that), but the line is blurry enough that I can imagine a lot of people becoming extremely confused and ending up enrolling in policies they thought were "Obamacare plans" when in fact they turn out to be #ShortAssPlans. And they likely won't find out until it's too late.

On the one hand, as much as I rail against #ShortAssPlans overall, I do think they can serve a useful function for a very limited population under very specific circumstances (at least until ACA 2.0 is passed, including removing the subsidy cliff)...but the Trump Administration has been doing everything they can to push people onto them, while simultaneously doing what it can to blur the lines between ACA and non-ACA policies.