I've written a lot over the past nearly three years about the damage caused to ACA policy enrollment caused by the Trump Administration's slashing of 90% of HealthCare.Gov's marketing, awareness and outreach budgets.

A significant portion of the reduction in ACA exchange enrollment in 2017, 2018 and 2019 can be blamed squarely on this.

That's not just my opinion; it's been supported by detailed analysis as well as the corresponding increase in enrollment on state-based exchanges, which operate their own marketing/outreach budgets.

The following graph compares the two over the first six Open Enrollment Periods. I've had to adjust for the fact that since 2014, several states have switched from state exchanges to the federal one or vice-versa, but even so, the contrast is dramatic and clear: 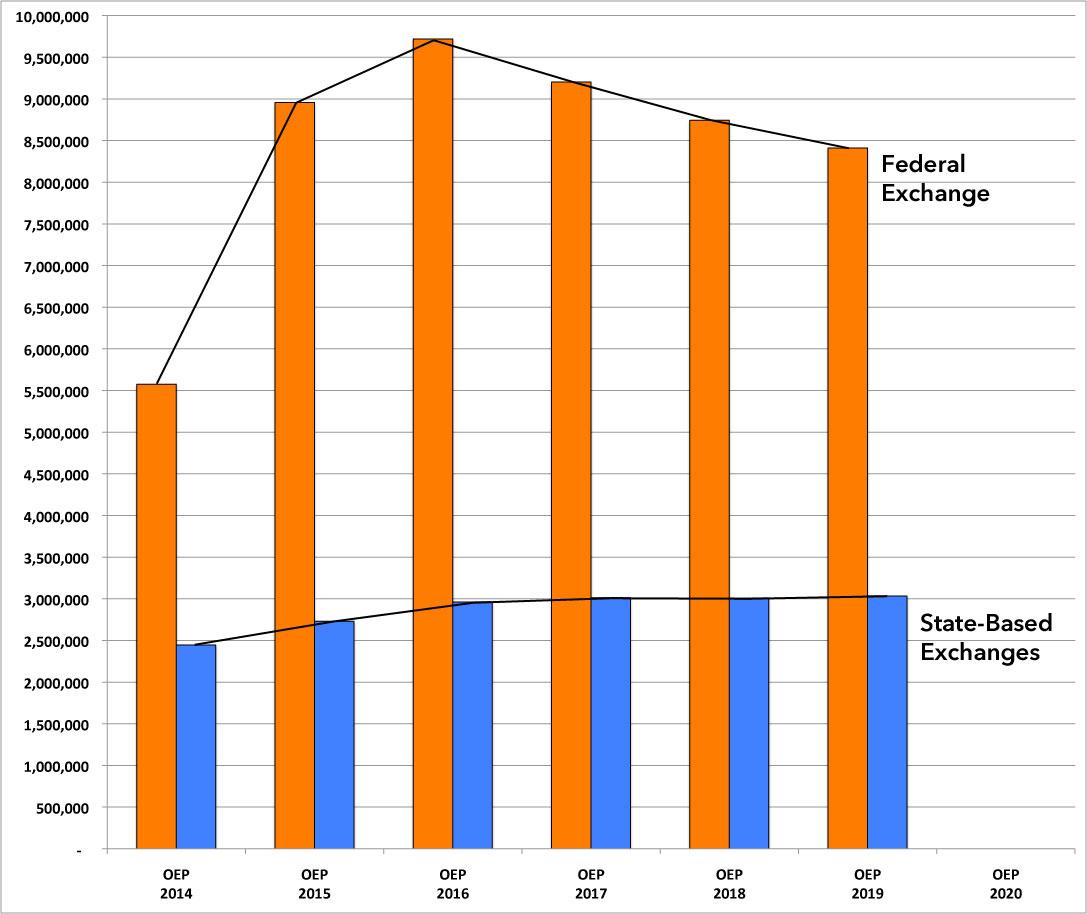 (Note: It's true that most of 2017's Open Enrollment Period technically happened under Obama, but the Trump Administration was in power for the critical final 11 days, during which there's typically a surge of enrollment...and during which they pulled the plug on all advertising of that impending deadline).

However, it's not just that fewer people are enrolling in ACA-compliant policies due to Trump's HHS Dept. actions...it's also that as a direct result of the Trump Administration's actions, it's now open season for scam outfits to hawk junk plans.

As Sarah Gantz of the Philadelphia Inquirer reports:

Martin thought she’d bought a comprehensive health insurance plan through the government-regulated Affordable Care Act marketplace, healthcare.gov. But she really visited a website cunningly crafted to look like an ACA portal, which put her in contact by phone with a salesman. He sold her plan that turned out to offer only minimal coverage, and when Martin needed help, his number was disconnected.

She was left with $36,000 in hospital bills that she’s still paying off.

...Limited-benefit insurance plans are legal and have an appropriate place in the insurance market, covering people who are between jobs or want to supplement their health insurance. These plans are not primary health insurance, yet they are increasingly showing up alongside comprehensive health plans. Access to these plans was limited under the Affordable Care Act, but the websites selling such plans have gotten bolder in their marketing as President Trump and free-market Republicans chip away at ACA rules, saying people need more affordable alternatives.

But shopping savvy isn’t necessarily enough to protect consumers. The insurance brokers who rely on such websites for leads use scripts carefully worded to instill trust and push consumers to act quickly — before they have time to read the fine print.

...What she bought was an accident and sickness hospital indemnity plan by Chubb, which has U.S. headquarters in Philadelphia. Once the plan paid its set rate per health incident — $2,000 — Martin was responsible for the rest of her hospital bills. ACA plans limit annual out-of-pocket spending. Not so for indemnity plans.

...Tread carefully when searching on Google — the top results are likely ads for private insurance websites.

Google has removed the most egregious ads by websites that used healthcare.gov in the ad’s title, following an investigation by Sen. Bob Casey (D-Pa.), which was spurred by the Inquirer’s reporting. But deceptive ads for “Healthcare Marketplace 2020” and “Obamacare Enrollment” still litter search results.

UPDATE: Thanks to Andrew Sprung for reminding me of another ugly way in which Trump's HHS Dept. is confusing people and making it easier for fraudsters to con people:

Under Trump, Seema Verma's CMS has altered the "find help" feature on HealthCare.Gov to put brokers as opposed to nonprofit navigators to the fore. CMS has also encouraged navigators *and* brokers to tell people about short-term plans. 2/

Sure enough, I actually reported on this back in July 2018:

...Additionally, this FOA includes a new requirement that Navigator funding will be based on performance from previous years to ensure accountability within the program and avoid rewarding grantees that have failed to meet performance measures. Applicants will also be encouraged to demonstrate how they provide information to people who may be unaware of the range of available coverage options in addition to qualified health plans (QHPs), such as association health plans, short-term, limited-duration insurance, and health reimbursement arrangements (HRAs). Under the FOA, CMS will give priority to applications demonstrating innovative and cost-effective approaches in reaching enrollment goals.

In other words, as a friend of mine noted at the time:

Isn’t nav funding from a service fee on compliant plans? So navs would be using insurer money to steer people elsewhere?

Yup...this is exactly correct. HC.gov charges carriers 3.5% of the premiums to pay for the cost of operating HC.gov...including the very marketing, navigator programs and other outreach which they've been slashing to the bone. But here's the thing...they're cutting the marketing and outreach budgets by tens of millions of dollars...but aren't cutting the carrier fee.

...The insurance companies aren't gonna be too happy about some of their money being used to "encourage" people to enroll in non-ACA policies.

...In other words, ACA carriers like Molina or Blue Cross are going to end up paying to help lose their own enrollees to bottom feeders like "Freedom Life" and the like.

As Sprung goes on to note, most brokers take their jobs seriously and will try to do right by the enrollee by finding the best plan for their situation...but there's nothing stopping them from pushing them towards junk plans either, and again, the Trump Admin is actively pushing for people to enroll in #ShortAssPlans.

As I noted in my "Seven things to remember" post, it's extremely important to only utilize an official ACA-compliant health insurance website to enroll. For most states that's HealthCare.Gov, but thirteen states operate their own exchange sites; I've posted the correct ones below.. 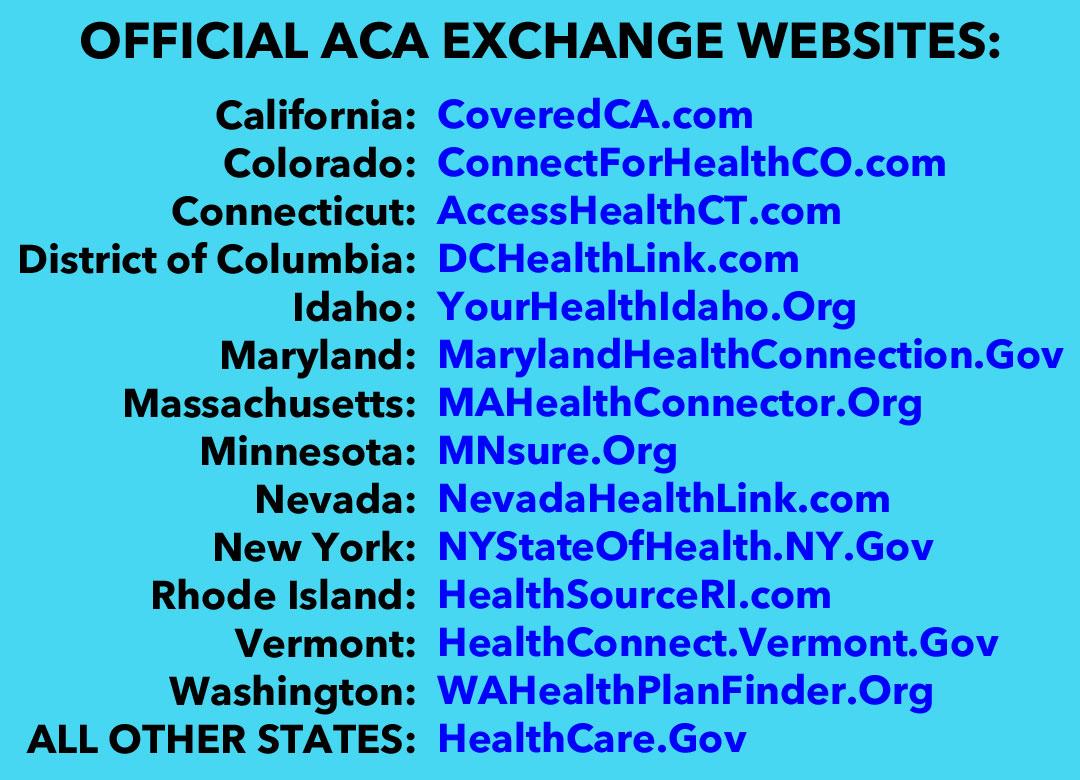 A final note: There are some officially authorized 3rd-party web brokers which sell ACA-compliant policies as well...but most of these also sell non-ACA policies including so-called "short-term" plans, indemnity plans and so forth. To my knowledge there's only one 3rd-party site which only sells ACA policies exclusively...and that's the one with a banner ad at the top of my site.