*("Week One" is a misnomer...see highlighted explanation below)

This Just In from the Centers for Medicare & Medicaid...

In week one of the 2020 Open Enrollment, 177,082 people selected plans using the HealthCare.gov platform. As in past years, enrollment weeks are measured Sunday through Saturday. Consequently, week one was only two days long this year - from Friday to Saturday. 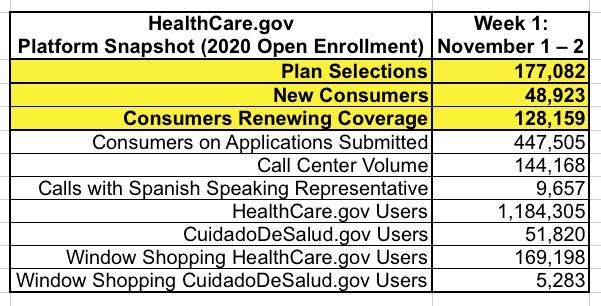 In addition, the number is gonna naturally be slightly smaller due to Nevada splitting off onto their own state-based exchange...NV tallied exactly 1% of all HC.gov enrollments last year.

Therefore, it's not particularly surprising that the 177K figure is less than half the "Week One" enrollment tally for HealthCare.Gov from last year (371,676). You'd expect it to be 33% lower even just by dividing the totals by the number of days counted, after all.

What makes that 177K figure of more interest to me is this, from HealthSherpa founder/head George Kalogeropoulos:

As we wrap up the second business day of open enrollment, @HealthSherpas has already enrolled 50,000 people in ACA coverage since November 1st! Today we processed more applications than on December 10th last year.

(Full disclosure: HealthSherpa has a banner ad at the top of this site.)

I've confirmed that the 50K figure only includes the 38 HC.gov states. He posted this the evening of Nov. 5th, which means that 50K figure includes five days of enrollment, so the numbers aren't an even match, but if you assume 40% of that came in the first two days, that means a 3rd-party web broker has enrolled around 11% of all HC.gov QHP enrollees in the first few days. Huh.

There's no state-by-state breakout or anything, and there's not nearly enough data from just two days to draw even initial conclusions from, so I'll leave it at that for now.

UPDATE: I may be shrugging off the substantial drop, but Joshua Peck of Get America Covered (who also used to work for CMS regarding ACA enrollment and outreach) is definitely concerned, especially given the widespread reports of technical problems on the first day of Open Enrollment last Friday:

The enrollment numbers released today suggest the technical issues that occurred on the site last Friday were likely far more significant than CMS had reported. We estimate that roughly 100,000 fewer people enrolled on Friday due to technical issues.

Peck didn't just look at the number or weekday/weekend status of the days year over year...he also looked at the web traffic, which is something I can't believe I didn't think to do (I used to be a website developer, after all...):

That gap basically suggests that around 9% of HC.gov enrollees over the first two days (representing around 100,000 people, as Peck notes) weren't able to complete the QHP application/selection process for technical reasons.

Obviously a lot (hopefully all) of those folks have since gone back and done so now that the problems seem to have been cleared up (or will soon), but this still isn't a great start to the 7th Open Enrollment Period.