Follow-up: Just how much MORE could MLR rebates be next year if the CSR lawsuit ruling holds?

OK, I know, I know, I'm obsessing over this and I promise to stop soon.

Yesterday I noted that due to a surreal, Rube Goldberg-esque series of events dating back to a different lawsuit filed back in 2014 by then-Speaker of the House John Boehner (!), it's looking very likely that the federal government will have to shell out at least $1.6 billion in Cost Sharing Reduction (CSR) reimbursement payments to over 100 health insurance carriers even though those carriers have already made up most of their losses elsewhere in the form of increased premium rates.

Adding to the insanity, however, thanks to the ACA's Medical Loss Ratio (MLR) provision limiting carriers on the individual market to no more than a 20% gross margin, a big chunk of that $1.6 billion--assuming the court decision ultimately holds up on appeal and the government actually does pay up--would then have to in turn be rebated to the policyholders in kind. More specifically, they have to pay out at least 80% of premium revenue on actual medical claims; anything less than that has to be rebated to the policyholders.

Read this link from February for the backstory, and then read yesterday's piece for the details on yesterday's court ruling, which breaks out the exact dollar amounts (to the penny!) that the feds have been ordered to pay out to every individual carrier. Remember, there are two amounts: The first is for the last 3 months of 2017 (these payments, totalling around $131 million collectively, shouldn't be in dispute by anyone, since they weren't "made up for" by the carriers). The second, usually much larger amounts ($1.46 billion collectively) cover the full 2018 calendar year.

It's the $1.46 billion which was the real jaw-dropper and which has potentially massive implications going forward. To my knowledge, most of the 100-odd carriers involved in the lawsuit (and others like it...there's a couple dozen nationally, I believe, although this one is by far the largest) weren't even planning on trying to get reimbursed for the 2018 CSR payments in the first place, since they had already covered that by raising their premiums an extra 14% or so starting in 2018.

In any event, as I noted yesterday, even if the payments are ultimately made, not all of the ~$1.6 billion will actually have to be paid out in MLR rebates, for a few reasons.

For one thing, the rebate calculation is based on a 3-year rolling average. That means that even if it was the full $1.6 billion, the rebates would be spread out over a 3-year period. Assuming the payments are made in full in 2020, and assuming the payments were not entered on a cash basis by the carriers, they'd have to back-date their 2017 and 2018 financial records, then figure out what portion of the additional funds has to be paid to each policyholder (not a fun task!) on top of whatever payments were already made in 2018 & this year.

As you can see in the table below, I've gone back through my big MLR Rebate Project to try and estimate just how much more each carrier in the Common Ground lawsuit (that's the lead named plaintiff in the class action case) might have to rebate next year beyond what I already estimated their 2019 MLR rebate totals would be without these additional settlement funds.

IMPORTANT: I'm making a lot of big assumptions here, so do not take any of the amounts below as a given; I could be wildly off on many of them. Furthermore, the court ruling could be overturned by a higher court, making all of this moot...and even if the payments are eventually made, that might not happen until 2021 or 2022. Finally, it's possible that the payments would be entered on a "cash basis", meaning they'd be plugged into whatever year the checks actually show up in. If that happens, there wouldn't be any additional MLR rebates until, again, 2021 or 2022.

It's also important to note that this judgment only relates to the ~100 carriers in this particular lawsuit. These carriers only represent around 25% of the total MLR amount paid out last month. There are several other similar cases which have received similar rulings from federal judges, so it's conceivable that the national total could be around 4x as much! 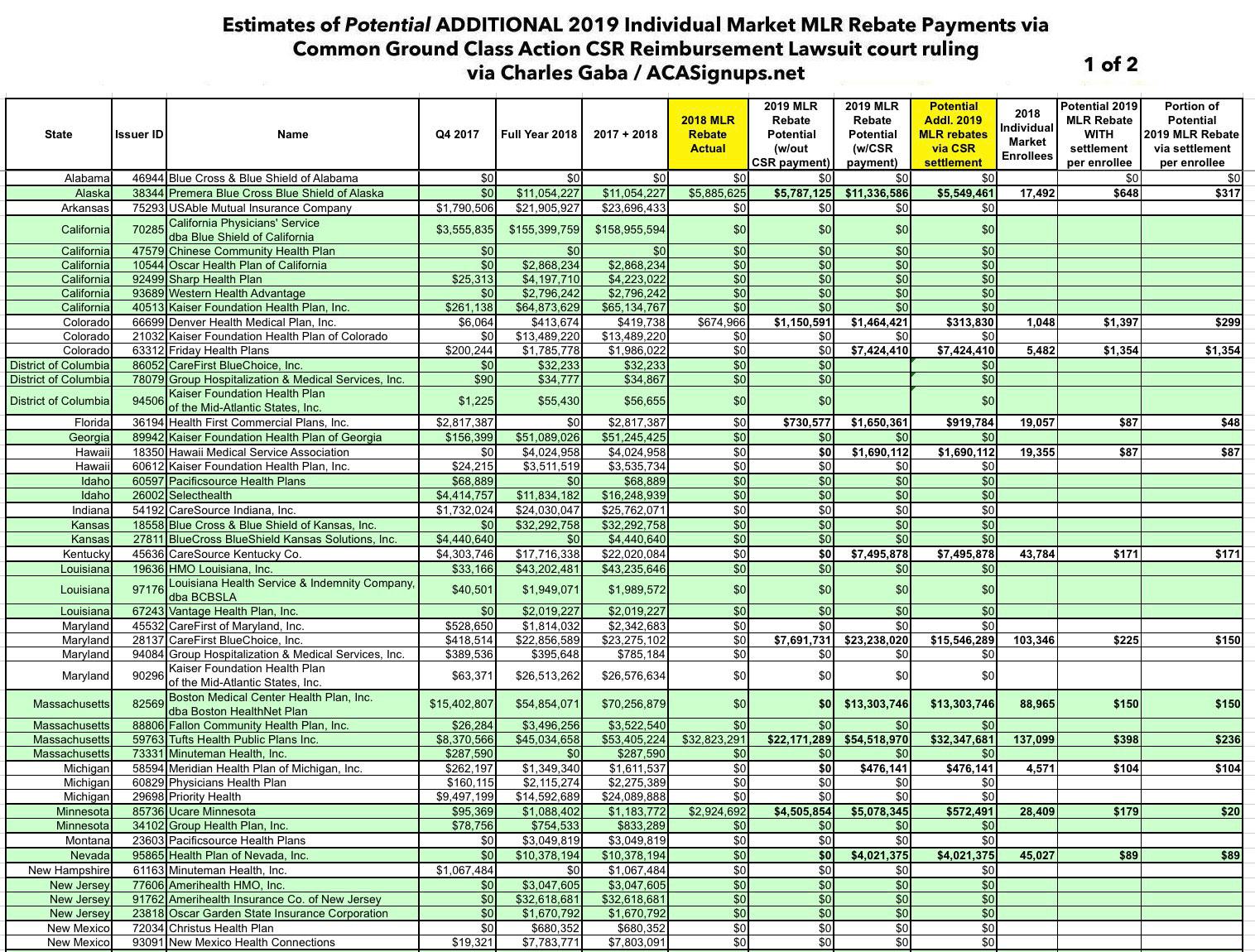 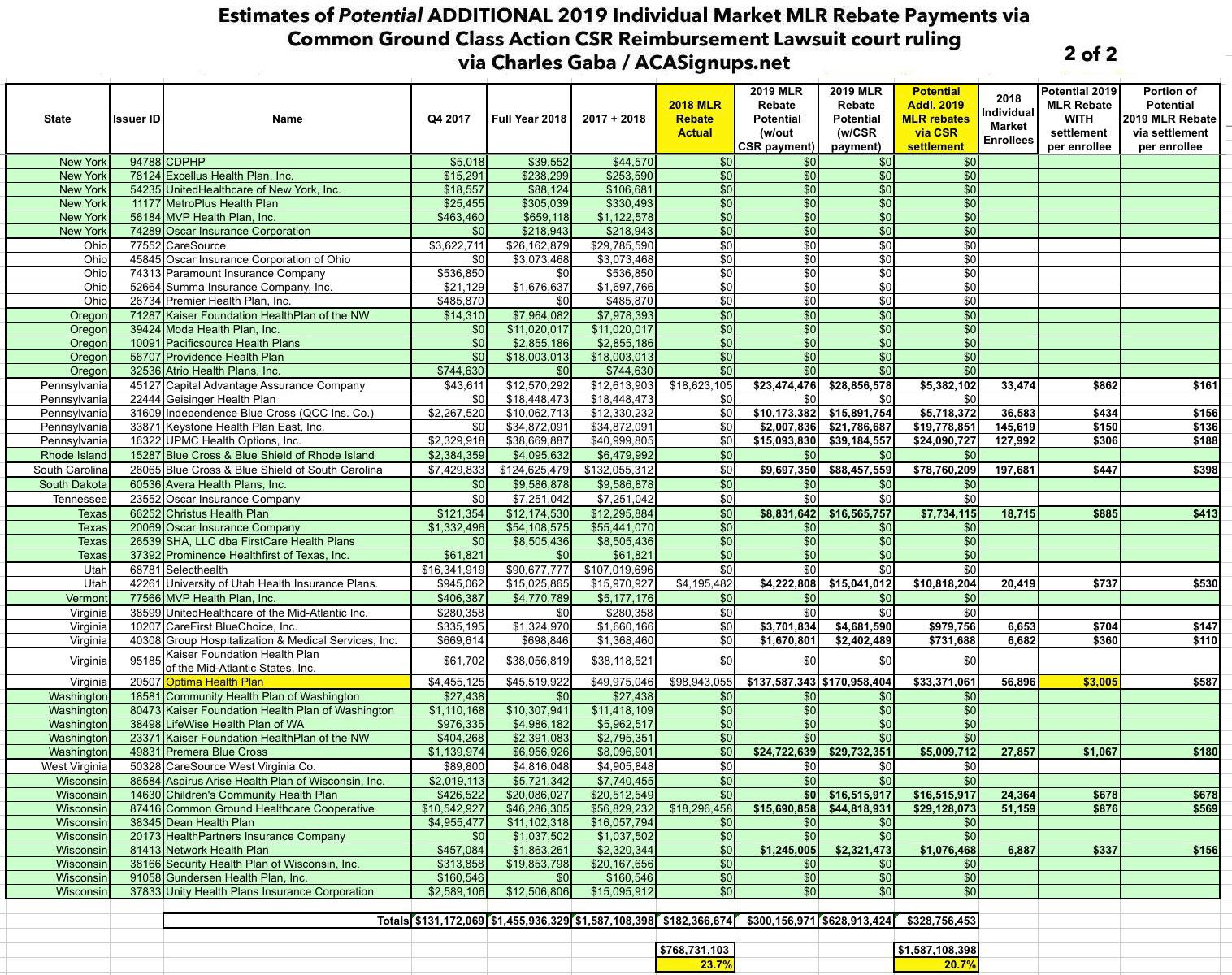 UPDATE: (Sigh) I went through a ton of effort to compile the table above...only to be informed by Wesley Sanders (who I trust on this sort of thing) that I was doing the calculations wrong--instead of adding the judgement payments to the denominator of each carrier's yearly revenue, I was supposed to subtract it from the yearly numerator:

In all prior years it's always been an offset to claims. If it rolls into MLR I can't see a good reason why they would change it, so it should be a reduction in the numerator I think.

As Sanders noted, this makes absolutely no difference in terms of the net profits of the carriers in question...$5 is $5, after all...but in terms of MLR rebates, which are based on percentages, it can make a big difference. Here's why:

That's a difference of 1.2 percentage points. Again, that may not sound like much, but when you're talking about hundreds of millions, or even billions of dollars, it can add up quickly. It can even make the difference between a carrier having to pay rebates at all or not having to.

With that in mind, I went back and re-ran the numbers for all 100 carriers, this time entering the CSR judgment funds as a claim offset (subtracted from the numerator)...and it made a pretty big difference: Over $100 million in additional rebate payments, inlcuding three carriers which wouldn't have had to pay anything at all if it was calculated the other way.