I haven't written much about South Bend, Indiana Mayor and presidential candidate Pete Buttigieg. The biggest mention I've given him until now was back in March, when he stated that he's an advocate for a robust Medicare-like public option plan.

Today, however, "Mayor Pete," as he's come to be known, rolled out his official healthcare overhaul plan, and sure enough, it centers on...a robust Medicare-like public option. He calls it "Medicare for All Who Want It":

BECAUSE HEALTH CARE IS A HUMAN RIGHT, GUARANTEE UNIVERSAL COVERAGE THROUGH MEDICARE FOR ALL WHO WANT IT.

The plan will automatically enroll individuals in affordable coverage if they are eligible for it, while those eligible for subsidized coverage will have a simple enrollment option. A backstop fund will reimburse health care providers for unpaid care to patients who are uninsured. Individuals who fall through the cracks will be retroactively enrolled in the public option.

Most commonly, unexpected bills arise when a patient receives care at an in-network hospital and, unbeknownst to them, is treated by an out-of-network physician.4 This mismatch is a deliberate business strategy fueled by profit-driven firms in private equity.5 About one in five visits to the emergency room is likely to lead to a surprise bill.

Pete will require that bills related to in-network facilities be billed as in-network. His plan will also place limits on what out-of-network providers, including ambulances and air ambulance services, can charge.

Ending surprise billing has arisen as a major issue over the past year or so. Several states have passed laws to crack down on it one way or another, and there was what seemed to be genuinely bipartisan federal legislation which was moving through the Senate...but more recently it appears to have stalled out.

Pete will make premium subsidies more generous for low-income people. Today, a family of three making $31,000 a year pays about $1,200 annually for “silver” coverage on the marketplace.6 Under Pete’s plan, they will pay a maximum of roughly $600 a year for higher quality (i.e., gold-level) coverage.

Buttigieg doesn't provide the exact formula for his beefed-up ACA subsidies, but I'd bet my lunch it's the exact same subsidy formula included in the House ACA 2.0 bill, the Senate ACA 2.0 bill and Joe Biden's "ACA 2.0 + Public Option" bill.

Furthermore, the upgrade from Silver to Gold for the benchmark is also identical to the Senate bill as well as Biden's plan (the House bill doesn't include the Gold upgrade for reasons which get too wonky to get into right now).

This plan will also extend the subsidies to more middle-income people by capping premium payments for everyone. That means that the 60-year-old in Iowa making $50,000 and currently paying $12,000 annually in premiums will now pay no more than $4,250 annually for gold coverage. Pete will also lower out-of-pocket costs for consumers by increasing cost-sharing assistance.

Yep, that confirms it: 8.5% is, again, the same proposed cap under the House bill, the Senate bill and Biden's plan.

It's actually remarkable that there have now been six different bills or plans from major players which use the same subsidy formula: The "8.5% cap" formula was originally recommended by the Urban Institute back in 2016 (later incorporated into their "Healthy America" proposal). It was picked up by Hillary Clinton as part of her healthcare plan.

Below is a summary of the current formula, the House and Senate bills, and Biden and Buttigieg's versions. For the Cost Sharing Reduction section, I'm not 100% certain of the formula for Biden's or Buttigieg's plans...raising the benchmark to Gold should mean far lower deductibles, and I believe Biden mentioned something about a $1,000 deductible cap, although I'm not certain about that; I'm assuming both of their plans would be at least as generous on out-of-pocket costs as Warren's CHIPA is: 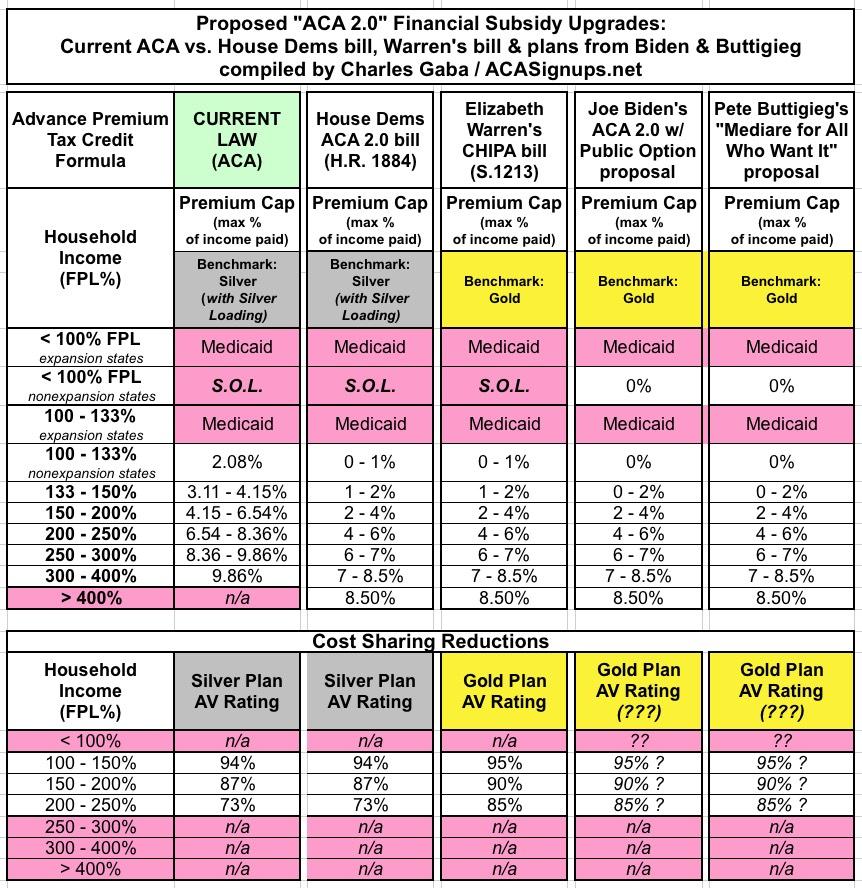 One in four Medicare beneficiaries—15 million people—spend over 20 percent of their income on premiums and medical care.7 Costs run much higher for many, including those with chronic disease and disability. The traditional Medicare program does not have a cap on out-of-pocket spending, putting seniors at risk of having medical or drug costs wipe out their savings. Pete believes that seniors in traditional Medicare deserve the same financial protection. He will improve affordability in Medicare by capping out-of-pocket costs, with lower caps for low-income seniors.

Ironically, for as much as so many people praise Medicare, this is one important area where ACA coverage is better than (current) Medicare: It includes a maximum out-of-pocket cost for deductibles, co-pays & coinsurnace (for in-network care, anyway)...and that maximum is indeed based on a sliding scale, which sounds pretty much the same as what Buttigieg has in mind.

This is where Buttigieg's experiences as a mid-sized city mayor in what I'm assuming is a semi-rural area (I don't know much about South Bend, I admit) presumably gives him a bit more insight. This is the first time I've heard direct criticism of non-profit hospitals in one of these healthcare overhaul bills...and it won't be the last hit on hospitals (keep reading).

This is closely related to the "surprise billing" section, of course: That portion would regulate what services must be billed at in-network rates; this one regulates how much out-of-network care can charge.

“Mental health parity” means that coverage and treatment for mental health and substance use disorder are provided on equal terms as treatment for physical conditions. Pete will enforce parity in several ways, including requiring health plans to annually report how they manage and meet parity. Health plans that violate this policy will face fines and statutory penalties. Those plans most often out of compliance will be publicly named.

Our health care system is the most costly in the world in part because it spends $496 billion annually on administrative costs—more than any other system globally.13 To lower cost and improve quality, we must make our health care system more efficient. Pete’s plan will do this by harmonizing standards for transactions and holding insurance companies accountable for adopting them. It will simplify billing by creating a central clearinghouse for claims,14 establish an All-Payer Claims Database that supports health care quality initiatives,15 and require integration of electronic records.

I give Buttigieg high praise for specifically calling out the insane administrative costs in the hospital system today. Don't get me wrong, the other plans/bills all do claim to address provider costs by negotiating reimbursement rates (either at Medicare rates or some multiple of it), but they tend to gloss over the details. Buttigieg raises several key points. And then there's this at the end:

Health insurers, hospitals, pharmaceutical companies, and health care provider groups are all growing larger, but bigger has not been better for patients. Greater consolidation among providers and insurers results in higher prices for patients without improving quality. To ensure robust competition in health care markets and protect patients, Pete will increase funding for federal antitrust authorities to empower them to review more mergers and equip them to bring enforcement cases against activity that harms competition and hurts health care workers.

THANK YOU! As my friend Andrew Sprung notes:

While the outlines of Buttigieg's Medicare-for-all-who-want-it offering are familiar -- better ACA subsidies, a strong public option, a buy-in for those discontent with their employers' offering, auto-enrollment of the uninsured -- its focus on cost control is unusual. The linchpins are a hard rate cap on out-of-network billing, antitrust enforcement, an all-claims database and central clearing house for claims, and "harmonizing standards [among private insurers] for transactions...

...Tossing "powerful hospital systems" onto the villain list behind "the pharmaceutical industry and giant insurance companies" may seem like a small variation on a theme. It's not. It's a real departure, informed by kick-ass reporting and research, and shaping key elements in Buttigieg's plan.

Overall Buttigieg's proposal sounds very close to Biden's: A robust ACA 2.0 with a strong Public Option attached. The biggest difference seem to be that Buttigieg's plan is a lot more aggressive about tackling hospital costs, which are a huge part of the out-of-control healthcare cost side of the equation. There's some other differences as well; Jon Walker has a nice summary with some additional thoughts on Twitter:

...So Buttigieg is finally out with his health care plan which is basically the Biden health care plan plus a few very good but minor additions, like a Japanese style retroactive enrollment to get de facto universal coverage and better OON solution...

My first thought is "why isnt this the Biden plan?" The changes Pete made are important but minor. They deal with the making sure every American is covered/not medical bankrupt problem. It makes the Biden team seem lazy and like they don't care...

My second thought is Pete plan is basically everything I said in 2010 ACA needed to be a minimum function health care system by international standards (at least quasi All-payer, public option, full subsidies, retroactive enrollment). All the issues were 100% obvious in 2010...

Biden plan would still leave us outside international norms in terms of health care protection, Pete's plan would move us into the pack at the bottom.

In short, among the "Big Five" candidates, their Big Healthcare Overhaul plans can best be summed up as:

Pete Buttigieg
Medicare for All Who Want It
Public Option