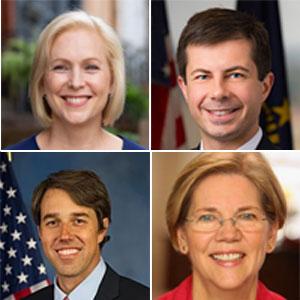 First, a few days ago former Congressman and Senate candidate Beto O'Rourke, who had previously supported a full single payer plan, backed off of that stance somewhat in favor of my preferred universal coverage bill, "Medicare for America":

Beto O'Rourke has long advocated for "universal, guaranteed, high-quality health care for all." But how exactly does he think the country should get there?

The question hung over O'Rourke's first few days as a presidential candidate here in this crucial early voting state, where voters and reporters sought more clarity on his approach to arguably the biggest issue in the Democratic primary. It is a race in which many candidates have already embraced some form of Medicare for All, the single-payer health care plan championed by U.S. Sen. Bernie Sanders, I-Vt.

But O'Rourke has a less-than-straightforward history with Medicare for All, and he continued to keep it at arm's length in Iowa, saying at one point that he is "no longer sure that that’s the fastest way” to achieve universal health care. Instead, he arrived in the Hawkeye State ready to talk about a different health care proposal: Medicare for America.

Introduced in December by U.S. Reps. Rosa DeLauro of Connecticut and Jan Schakowsky of Illinois, the legislation would set up a government-run health care program — like Medicare for All — but aims to let people keep their employer-sponsored insurance if they have it and like it.

Meanwhile, South Bend, Indiana Mayor Pete Buttigieg (who wasn't really considered to be a serious candidate at first but whose stock has risen considerably since his well-received CNN Town Hall a week or so ago) also makes it sound like he's a proponent of a "Medicare for America"-like robust public option-style healthcare plan:

South Bend Mayor Pete Buttigieg, a declared 2020 presidential candidate, on Sunday said a single-payer health care system is "the right place for us to head as a country," while saying a "Medicare for All" program doesn’t necessarily require doing away with private insurance.

Buttigieg responded to questions from ABC host George Stephanopoulos about whether Medicare for all means an end to private insurance.

"If the framework we're using is Medicare, a lot of people who have Medicare also have Medicare supplements, Medicare Advantage, something like that," Buttigieg added. "So if we want to make Medicare available to everybody, whether it's as a public option to buy in or simply establishing that as how the payer structure works in this country, that's going to be the center of gravity."

Finally, at an MSNBC Town Hall with Chris Hayes earlier this afternoon (which I attended in person here in Michigan), New York Senator Kirsten Gillibrand, who, as I noted earlier is one of the cosponsors of the Medicare for All bill, stated point-blank that while she'd prefer a single payer system, her preferred method of achieving it is...

Gillibrand says her vision of Medicare for All is a buy-in option not single-payer. Private insurers could still operate, but she expects most people would move to new non-profit public option, calls it a “transition.”#AllIn2020 MSNBC town hall in Auburn Hills. https://t.co/rRAfjinJ36

Sort of. She supports using Medicare buy-in as her preferred means of *achieving* single payer/Medicare for All, which is exactly how #Med4America would work: The private employer-based insurance market would either compete on its own merits or gradually shrink away. https://t.co/AwbUGbGeKM

The reality is, both Elizabeth Warren and Kamala Harris have also expressed similar takes in less formal ways; Warren has noted several times that she's open to other options beyond the precisely pure "Medicare for All" bill, while Kamala Harris initially said we should "get rid of all that" regarding private health insurance, but walked that back a bit the next day.

The larger point is that the "Medicare for All" rallying cry--which, if interpreted to only refer to S.1804 itself, which would require all 325 million Americans to migrate to the new system over a 4-year period--is starting to see significant cracks as the rubber hits the road and the realities of attempting to not only sell such a bill to Congress but also to the voting public start to rise to the surface.

UPDATE: OK, make that FOUR candidates...in addition to her already making general statements about being open to other options in the past, Elizabeth Warren, at her own CNN Town Hall event airing right now, just stated something pretty much in line with Gillibrand and Buttigieg (although she didn't name-check "Medicare for America" specifically the way Beto O'Rourke did):

Elizabeth Warren says there are many pathways to Medicare for all, wants 100% universal coverage for the lowest cost.

She says we would have to figure out the role of private insurance, could be a Medicare option for employers and employees.

Back to Warren's answer: 100% universal coverage for the lowest cost = <$3 trillion under a Medicare for America approach. The reason is it preserves the employer and state streams of financing.

Elizabeth Warren says she is open to multiple paths to universal health coverage: “When we talk about Medicare for All, there are a lot of different pathways. What we’re all looking for is the lowest cost way to make sure that everybody gets covered." #WarrenTownHall pic.twitter.com/3Kqjj8oqlA

I should be able to post the actual transcripts from both Gillibrand and Warren's Town Halls tomorrow, but here's a summary of each of their responses:

"I believe, as most Americans do, that healthcare should be a right and not a privilege, and that means you have to fight for universal coverage...I think the quickest way you get there is you allow anyone to buy into Medicare at a price they can afford. Something like 4-5% of income. They buy in, so it's an earned benefit, and they are qualified automatically for Medicare. What that does, at a minimum, is create competition in the system immediately.

Those insurers, I don't think they are going to compete...so the truth is, let's have a not-for-profit public option compete for the business. I think over a couple of years we are going to transition into single payer."

Asked about “Medicare for All” at CNN’s town hall Monday night, Sen. Elizabeth Warren suggested that she was open to multiple paths to universal coverage.

“When we talk about Medicare for All, there are a lot of different pathways. What we’re all looking for is the lowest cost way to make sure that everybody gets covered,” Warren said.

“For me what’s key is we get everybody at the table on this,” Warren emphasized.

She later added: “But what’s really important to me about this is we never lose sight of what the center is. Because the center is about making sure that every single person in this country gets the coverage they need and that it’s at a price that they can afford.”