In mid-July, the Connecticut Insurance Dept. reported that average requested premium rates for 2020 averaged around a 7.8% increase on the Individual market and 12.0% on the Small Group market.

This weekend, they reported the approved 2020 rate changes for both markets...and have cut down the rate hikes significantly for most carriers (while raising them a bit on a few others):

Insurance Commissioner Andrew N. Mais today announced the Department has made final decisions on health insurance rate filings for the 2020 coverage year. As a result of these decisions, Connecticut consumers are projected to save approximately $54 million.

The Department approved an average increase for individual plans of 3.65 percent, down from the average request of 7.78 percent. The average increase for small group plans is 9.19 percent, down from the requested average of just over 11.98 percent. This is despite the reinstatement of the federally mandated health insurer tax which added an average of 3.0 percent, or approximately $53 million in additional premium.

...Medical trend, a factor that includes rising health care costs such as the costs of prescription drugs and the increased demand for medical services, is rising at approximately 8.2 percent. Other factors contributing to the final decisions include the reinstatement of the federally mandated health insurer tax which accounted for an average of 3.0 percent, equal to approximately $53 million in additional premium, and the results of the Centers for Medicare & Medicaid Services (“CMS”) Risk Adjustment Data Validation Audit which varied by carrier.

This is why I'm assuming that 2019 MLR rebates will be even larger than they were this year. Let's assume that a carrier brings in exactly $100 million in premium revenue this year, and pays out exactly $80 million in claims, giving them a perfect 80.0% MLR ratio. For 2020, they expect the exact same number of enrollees, and expect their medical claims to increase by exactly 8.2% ($86.56 million).

They also expect to have their overhead to increase by 3% due to the reinstated tax, so if they keep their premiums flat, that's an extra $3.0 million in overhead. This would mean instead of a 20% gross margin for operating expenses, marketing and profit, they'd be down to just 10.4% ($10.44 million). With that in mind, you would think they'd raise their premiums by something like 11.2% to cover both of these additional expenses and keep them in the black with a small but decent profit.

However, on average, carriers in Connecticut are only increasing their premiums by 3.7%. This strongly suggests that their 2019 MLR is lower than 80%. How much lower? Well, I won't know for sure until next summer, but I'm guessing it's at least a few percent. Let's say it's 77%.

Of course, there are a bunch of other factors I'm not taking into consideration here, such as risk adjustment payments and so forth, so I could be dead wrong. We'll see.

In any event, here's the approved rates on both the individual and small group markets: 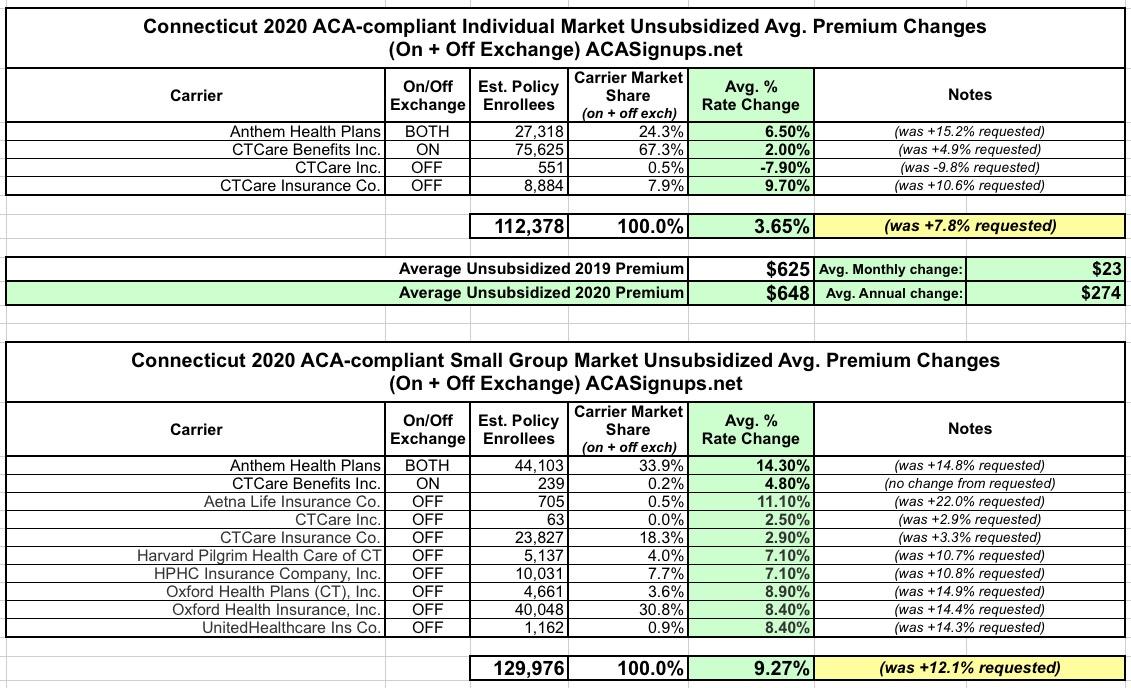