I feel kind of stupid posting this in the aftermath of not one, but two massacres in El Paso, TX and Dayton, OH (at least one of which was a clear case of white nationalist terrorism inspired and encouraged by Donald Trump), but I was bout 80% done with this last night and this is part of my job, so here it is.

Gov. Tony Evers today announced that 2020 rates on Wisconsin’s individual health insurance market will be 3.2 percent lower on a weighted average compared to 2019 rates. This encouraging news further demonstrates that the individual market is stabilizing and Wisconsin residents are able to access more affordable coverage options.

The rate decrease also highlights the positive impact of that the Wisconsin Healthcare Stability Plan (WIHSP), or the state’s reinsurance program, is having on the individual market. WIHSP was fully funded in the recently signed 2019-2021 state biennial budget. Without the WIHSP, rates in the individual market were expected to increase by 9 percent in 2020.

As you may recall, former Republican Governor Scott Walker tried to save his re-election campaign last year by agreeing--after years of trashing the ACA, of course--to pushing through a 1332 ACA reinsurance waiver to lower unsubsidized ACA exchange premiums. The waiver (like most of the other states, both red and blue, which have applied for one) was approved by CMS, and as a result, unsubsidized 2020 premiums will be 12.2 percentage points lower than they otherwise would have been.

“This is an important step forward as we work to make quality healthcare more affordable for Wisconsin’s families, and it is encouraging to see rates continuing to stabilize after years of rate increases and market instability," said Gov. Evers. "The WIHSP is working, that’s why I included full funding for it in The People’s Budget.”

Prior to 2019, Wisconsin’s individual health insurance market was highly unstable, with insurers leaving the market, reduced coverage areas, and double-digit premium increases. Under the WISHP, which became operational on January 1, 2019, Wisconsin is seeing insurers expand their service areas across the state, resulting in more coverage options and lower premiums for many consumers.

“This is exciting news for consumers across Wisconsin,” said Commissioner Mark Afable. “Access to quality coverage is so important, and on average, the cost of that coverage will be decreasing for Wisconsin families. We’re seeing a positive trend towards more coverage options in more places across the state, and that’s a great thing for consumers.”

In addition to declining rates, Commissioner Afable also highlighted the recently announced partnership between OCI and the Department of Health Services (DHS) aimed at expanding healthcare outreach, education, and enrollment around the state. The DHS/OCI Health Care Coverage Partnership brings together providers, insurers, agents, public health officials, enrollment specialists, and other stakeholders from across Wisconsin to help more people get enrolled in the right health care coverage for themselves and their families.

“I’m very excited about this partnership, and I know Secretary-designee Palm is as well,” said Commissioner Afable. “We’ve assembled a great advisory council from around the state, and we’re ready to get to work. The budget signed by Gov. Evers included $541,000 for healthcare outreach and education, and that money will be instrumental in helping more Wisconsinites connect the dots and find coverage that suits their families and their budgets.”

Even with these positive developments, Gov. Evers will continue to fight to expand Medicaid in Wisconsin.

“I’m pleased with where things are going, but I know we still have more work to do to ensure every Wisconsinite has access to the care they need,” said Gov. Evers. “The WISHP has helped reduce rates and stabilize the market, but premiums would be lower and more of our neighbors would have quality coverage if we expanded Medicaid. By accepting the federal money, more Wisconsin residents can get access to quality coverage under Medicaid, while improving the risk pool for those buying on the private exchange. In other words, Medicaid expansion gets more people to access to better coverage at better prices. That’s a win-win, and the kind of common-sense leadership the people of Wisconsin demanded last November.”

Yep. Shifting tens of thousands of low-income Wisconsinites off of the individual market over to Medicaid coverage would indeed improve the Indy market risk pool since low-income folks tend to be sicker than average.

Unfortunately, the actual enrollment data for most of the carriers in Wisconsin is redacted, meaning I have no way of getting a total Individual Market size or the weighted average, although Gov. Evers already notes that it's a 3.2% reduction in his press release: 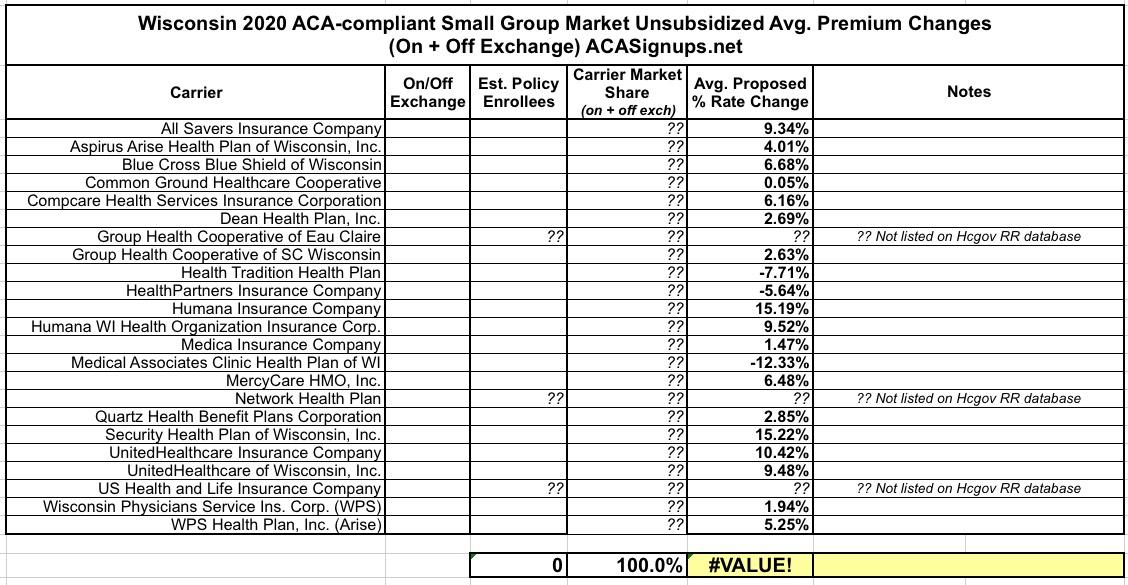