Colorado: Cory Gardner tries to take credit for something he tried to eliminate and had nothing to do with anyway.

As I've explained before, Section 1332 of the ACA itself gives individual states the right to petition to make changes in how the law works in their state. The idea is that, as President Obama noted himself, if a state can come up with ways to make the ACA provide coverage which is at least as comprehensive to at least as many people as it already does, without increasing the federal deficit, go for it.

There've been a couple dozen 1332 waivers which have made it at least partway through the development process; some failed along the way, some were completed but then rejected by CMS, and some have been approved. The most common type of approved 1332 waiver, in nearly a dozen states now, is for reinsurance, which is a wonky way of leveraging state dollars to reduce premiums for unsubsidized ACA enrollees.

If you're wondering why you've only heard about "reinsurance waivers" over the past year or two, there's two reasons.

In other words, it was sheer coincidence of timing that 1332 waivers became a thing at the same moment that Donald Trump took office. No one in his administration "created" or "allowed" them to be developed (although I do give CMS some credit for at least approving many of them).

Back in March, I reported that state legislators in Colorado were jumping onboard the ACA 1332 Reinsurance Waiver Train:

I had the chance Wednesday night to voice Connect for Health Colorado’s support for HB19-1168 before the state House Health and Insurance Committee. The bill, which is sponsored by members of both parties in both chambers of the Legislature, would authorize the state insurance commissioner to apply for a state innovation waiver to allow Colorado to implement a reinsurance program to assist health insurers in paying high-cost insurance claims.

If enacted, the bill would provide significant relief on health insurance premiums in the individual market – on and off the Marketplace— particularly in rural areas. This aligns well with our mission to increase access, affordability and choice in the health insurance market. The committee voted to move the bill forward to the Appropriations Committee.

A few weeks later, I noted some additional details of the reinsurance waiver bill, which included an unusual funding mechanism:

DENVER (March 21, 2019) – Today, the Division of Insurance (DOI), part of the Department of Regulatory Agencies (DORA), released an actuarial study regarding a proposed reinsurance program for health insurance in the individual market (for those who do not get their health insurance through their employer or through a government program).

The Colorado Reinsurance Program Analysis is related to House Bill 19-1168 (HB19-1168), “The State Innovation Waiver Reinsurance Program.” The Division commissioned this actuarial study to evaluate what premium decrease would result from the Colorado model for funding reinsurance, and to demonstrate the effectiveness of this model.

...In the study, completed by the actuarial firm Lewis & Ellis, multiple scenarios are reviewed to show the expected reductions to the costs of medical claims through Medicare-reference-based pricing. These reduced costs lead to a statewide decrease in individual health insurance premiums of nearly 23 percent, or approximately $250,000,000.

...While similar programs have gone into effect in a number of states, Colorado’s funding mechanism for reinsurance would be an innovative approach. This mechanism utilizes Medicare reference-based pricing to bring down health care costs (what is paid to hospitals and doctors). Medicare-reference-based pricing means that the hospitals, doctors and other healthcare providers would be paid a percentage of what Medicare would pay. For example, the program may pay 150 percent (or 1.5 times) of what Medicare would pay for services, which would be less than what is currently paid to healthcare providers. That savings is then passed on to consumers in the form of lower premiums.

Unfortunately, the Medicare-pricing-based funding proposal ended up getting the axe, and Colorado went with a standard reinsurance strategy instead:

A bill hailed as a landmark way to lower health insurance costs, especially for rural Coloradans, cleared the House Monday on a bipartisan 47-15 vote. But it's different from the version that Gov. Jared Polis touted when it was introduced in February.

House Bill 1168, which now heads to the Senate, would set up a short-term reinsurance program -- think of it as insurance for health insurers -- that rural lawmakers hope will drive down the cost of health insurance premiums.

...But between then and now, word came down from the Center for Medicare and Medicaid Services (CMS), the federal agency that grants states a waiver to enter into reinsurance programs, that the model originally contained in HB 1168 wouldn't fly in Washington. And hospitals weren't happy about being forced to reduce their rates, either.

So lawmakers in the House, including the bill's sponsors, Democratic Rep. Julie McCluskie of Dillon and Republican Rep. Janice Rich of Grand Junction, went back to work, and the solution is one that more closely mirrors what other states have done.

...The agreement negotiated with the hospitals, McCluskie said, is for a special provider fee,possibly based on the number of inpatients and outpatient visits, and on a hospital's net patient revenue.

In the end, the final version passed and signed into law by Gov. Polis won't have quite as much of an impact on reducing premiums as projected, but it's still pretty damned good:

Today, the Colorado Division of Insurance (DOI), part of the Department of Regulatory Agencies (DORA), announced that for the first time ever, Colorado health insurance companies that sell individual plans (for people who do not get their health insurance from an employer or government program) expect to reduce premiums by an average of 18.2 percent (-18.2%) over their 2019 premiums, provided the reinsurance program is approved by the federal government. These are the health insurance plans available on the Connect for Health Insurance Exchange, the state’s health exchange made possible by the Affordable Care Act (ACA).

...Without the proposed reinsurance program, the companies’ requested premium changes would add up to an average increase of 0.5 percent (+0.5%). Find a description of the reinsurance program at the end of this release (“What is Reinsurance”).

In other words, unsubsidized 2020 premiums for ACA exchange plans will be around 18.7 points lower than they would be without the reinsurance program (vs. the earlier 23%). Still pretty good!

Well, yesterday, as expected, the Centers for Medicare & Medicaid (CMS) signed off on the waiver request, so that 18%+ premium cut is a go:

Federal officials have approved Colorado's proposed reinsurance program, which the governor's office says could slash healthcare premiums by an average of about 18 percent for state residents enrolled in insurance through the Affordable Care Act.

Gov. Jared Polis, who has prioritized lowering health care costs during his first year in office, announced the federal approval at a news conference Wednesday morning.

...The state Division of Insurance in January estimated that a small reinsurance plan would cost the state $70 million in 2019.

Sen. Kerry Donovan (D-Vail), who co-sponsored the bill that created the reinsurance program, called the program a "creative, Colorado solution that will have a real and immediate impact on people across the state," according to a news release Wednesday.

Donovan's focus with the bill centered on her constituents in the western part of the state and the high country, where insurance premiums are among the highest in the country - in part because there are fewer health care providers and hospitals. The reinsurance program could cut premiums in that region of the state by as much as 29 percent in the individual health insurance marketplace, according to the governor.

Bravo to the Colorado state House and Senate! Bravo to Colorado Gov. Polis!

You may note that I highlighted the names of several state legislators along with Polis. You may also note whose name isn't mentioned in any of these articles: Republican U.S. Senator Cory Gardner. There's a reason for that: He didn't have a goddamned thing to do with any of this:

Funny, I don’t remember ever hearing your support of this. As Chair of Health and Insurance Committee, I would’ve remembered that. If you really cared about Coloradans health care access, you’d fight for the ACA instead of tearing it down https://t.co/glkI3RnCou https://t.co/DIoPCcMvnd

Zero calls from @SenCoryGardner’s office and zero support from him over the years we’ve been working on this. Instead, he’s been in DC trying to repeal Obamacare — the very foundation of reinsurance to begin with. But, sure, take credit... #copolitics https://t.co/UMoB3T9ko3

How dare you @SenCoryGardner! My colleagues and I passed reinsurance while Trump, you, and Senate Republicans have sabotaged the ACA and healthcare. This was passed with NO THANKS to you. Don’t you dare to try and take credit for our work. #copolitics #coleg #cosen

Here's the tweet (complete with an embedded video!) these refer to:

GREAT NEWS Today @CMSGov approved Colorado’s reinsurance waiver, which will greatly lower the cost of health care premiums in Colorado. I’ve worked with the state and CMS to make this a reality and I’m proud of this bipartisan accomplishment to drive down health care costs. pic.twitter.com/LpBaqjdA9a

As you'll see from the responses, Gardner was swiftly and savagely called out for this crap by hundreds of people.

What makes his attempt to steal credit for the reinsurance waiver even worse, of course, is the fact that Gardner has voted to either repeal or damage the ACA numerous times over the years...including his vote to repeal the individual mandate penalty, which is what (whether that was his intention or not) gave 20 GOP attorneys general the excuse they needed to file the Texas vs. Azar lawsuit which could result in the entire ACA being struck down altogether.

My friend Laura Packard already did most of the work for me:

You've worked tirelessly to take away our health care. Now you're pretending like you care. We remember. 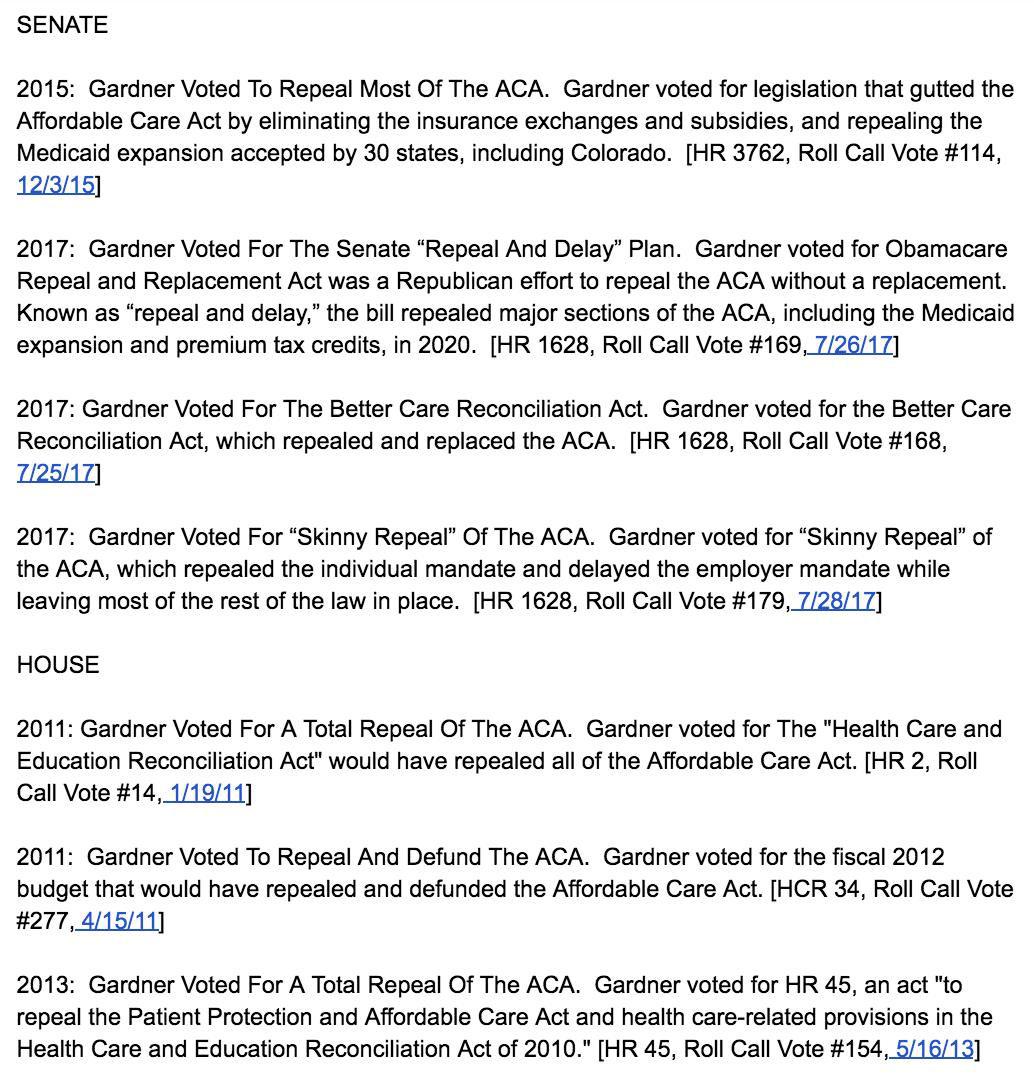