Back in 2016, California passed an important bill which allowed undocumented children to enroll in the state's Medicaid program (called Medi-Cal). The costs are borne entirely by the state, since federal law currently doesn't allow federal taxpayer dollars to be used to pay for Medicaid...although, I should note, this isn't entirely true:

Federal law generally bars illegal immigrants from being covered by Medicaid. But a little-known part of the state-federal health insurance program for the poor has long paid about $2 billion a year for emergency treatment for a group of patients who, according to hospitals, mostly comprise illegal immigrants.

The lion’s share goes to reimburse hospitals for delivering babies for women who show up in their emergency rooms, according to interviews with hospital officials and studies.

This scratched the under-18 undocumented population off the list, but it still left over a million undocumented immigrants out in the cold...until last year:

BREAKING: #SB974 (@SenRicardoLara) passes the CA Senate, to expand Medi-Cal to include all seniors regardless of immigration status, a key step to #Health4All. Bill goes to Assembly; Issue is being discussed in #CABudget negotiations. #CALeg #Care4AllCA @CALimmigrant

BREAKING: California Assembly passes #AB2965 (@drarambulaAD31) to expand Medi-Cal to include all income-eligible young adults regardless of immigration status, as a step to #Health4All. #Care4AllCA

Between AB2965 and SB974, it sounds like California is taking care of undocumented immigrants at the young and elderly ends of the lifespan.

That was last year. This was yesterday and today:

Whoa...this is a big deal! #AB4 and #SB29 would extend Medicaid coverage to adult undocumented immigrants!
(I think it’s limited to ages 19-25 and over 65, but it’s still huge!)

With #AB4 passing, we expect the Senate #Health4All bill #SB29 to come to a vote on the Senate Floor shortly!

We urge all CA Senators, such as @SenBobArchuleta@SenatorUmberg@AMCab2@SenSusanRubio,
to vote for a stronger health system with #SB29!

CA Senate passes @SenMariaEDurazo's #SB29 to expand Medi-Cal to income-eligible undocumented young adults and seniors. The bill was scaled down from an earlier version that proposed extending to all, but still broader than what @GavinNewsom's budget supports #caleg

How much would it cost and how many would be covered?

Democratic Gov. Gavin Newsom wants to spend about $98 million a year to cover low-income immigrants between the ages of 19 and 25 who are living in the country illegally.

The state Assembly has a bill that would cover all immigrants in California living in the country illegally over the age of 19. But Newsom has balked at that plan because of its estimated $3.4 billion price.

"There's 3.4 billion reasons why it is a challenge," he said.

The state Senate wants to cover adults ages 19 to 25, plus seniors 65 and older. That bill's sponsor, Sen. Maria Elana Durazo, scoffed at cost concerns, noting the state has a projected $21.5 billion budget surplus.

Hmmm...ok...here's another article which adds a bit more detail:

Both SB 29 and AB 4, which would expand Medi-Cal to income-eligible adults regardless of immigration status, are moving forward after clearing respective appropriations committees.

The Senate bill by Sen. Maria Elena Durazo, D-Los Angeles, passed on the condition that it conform to the chamber’s budget proposal. But the Senate Committee on Budget and Fiscal Review is setting aside funding for just two groups within the state’s undocumented population — young adults ages 19 to 25 at a cost of $98 million, and seniors ages 65 and over at a cost of $62.5 million.

...Also in the Senate budget proposal is a plan to increase eligibility for Medi-Cal by one year every fiscal year, beginning with expansion to people age 26 in 2020. After a year, the program would be open to people up to age 27, the next year up to age 28, and so on, in an effort to prevent enrollees from aging out.

Young adults have been the focus this year, but they make up a mere 8% of the state’s undocumented population, according to a report from the University of California, Los Angeles.

Just 2% are seniors, and 82% are working-age adults. The rest are kids.

Hmmm...ok...so that's a total of around $161 million per year...but how many people are we talking about here?

Well, according to this analysis of the 2019-2020 Medi-Cal budget and Newsom's proposal for adding undocumented young adults:

In 2019-20, the Governor s budget proposes to extend comprehensive Medi-Cal coverage to income-eligible undocumented immigrants ages 19 through 25. Under the Governor s proposal, the administration projects that 138,000 undocumented young adults will gain comprehensive Medi-Cal coverage in 2019-20, at a net General Fund cost of $134 million. This proposal presents the Legislature with decisions to make on whether it wishes to use its discretionary ongoing resources to fund an expansion of health care coverage and on which of the state s demographic groups it wishes to prioritize for expanded coverage at this time.

The analysis concludes that Newsom actually overestimated the cost for this population, but in terms of the numbers, this translates into something like:

However, keep in mind that this is the increase in costs to the state:

In 2019-20, the Governor‘s budget proposes to extend full-scope Medi-Cal coverage to income-eligible undocumented immigrants ages 19 through 25, most of whom are currently considered to be uninsured as they only have limited Medi-Cal coverage for emergency- and pregnancy-related services. The administration estimates the net cost of this proposal to be $134 million in 2019-20. The net cost comprises (1) the new full-year cost in Medi-Cal of expanding comprehensive Medi-Cal coverage to a projected 138,000 undocumented adults and (2) projected General Fund savings under a proposed increase in the redirection of county realignment funding for indigent health care services. As discussed below, while there is significant uncertainty around the cost of expanding coverage, we find that the administration s General Fund cost estimate in Medi-Cal is likely too high. Below, we more fully describe and provide our assessment of the Governor s proposal.

In other words, full Medi-Cal might cost something like, say, $560 million/year for these ~163,000 people, but the state is already spending something like $400 million to treat them anyway, so they might as well pony up another $160 million or so and provide more comprehensive, streamlined healthcare for them.

UPDATE: Hmmm...ok, I'm a bit confused; I was just sent a link to another Legislative Analyst's Office report (the same source as the one above) which lays out the numbers differently: 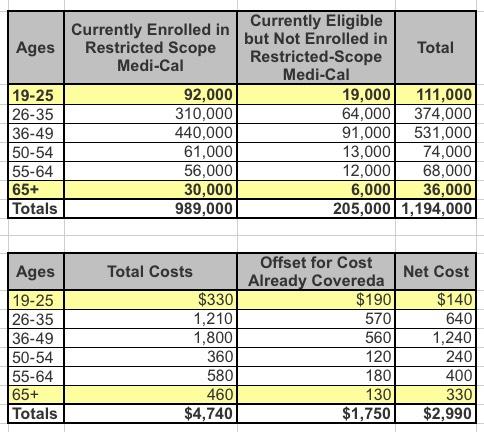 This makes it sound like there'd only be around 147,000 people eligible (not that far off), at a considerably net higher cost of around $470 milion total. These numbers actually make much more sense, especially re. the 65+ population (they amount to around $1,300 and $9,200 apiece on average). I'm not sure how to square the $330 million with the $62.5 million figure in the earlier article.

UPDATE: OK, In the end it looks like only the "young adult" population ended up making the cut after all:

Democrats in the state legislature reportedly agreed to the broad plan on Sunday afternoon. The budget agreement must be approved by the full state Legislature before it can be officially enacted. Lawmakers, under California law, must enact a budget by midnight on June 15.

The agreement allows low-income undocumented immigrants between the ages of 19 and 25 to be eligible for California's Medicaid program, according to AP. The news service, citing state estimates, noted that about 90,000 people will qualify for the program and that it will cost approximately $98 million per year.

BREAKING: The Conference Committee #CABudget does expand Medi-Cal to income-eligible young adults regardless of immigration status, but the expansion does not include seniors as many also sought. More work to do in the months ahead. #Health4All @HealthAccess #Care4AllCA