I did this because of an interesting paradox: The Bernie Sanders/Pramila Jayapal "Medicare for All" bills have had several cost projection studies done by serious policy think tanks...but has no actual payment mechanism baked into the legislation itself (beyond repurposing existing federal healthcare spending dollars, which would only account for perhaps 30% or so of the cost at most). On the flip side, the Medicare for America bill includes very specific payment mechanisms within the legislative text itself...but I'm not aware of any major cost analysis which has been done for the bill as of yet.

With that in mind, I decided to tackle it myself purely as a fun exercise. I'm deliberately posting this before discussing it with anyone at either Rep. DeLauro or Rep. Schakowsky's offices (they're the two co-sponsors of the legislation) or the Center for American Progress (which worked with them to develop the bill) in part because I'm curious to see just how far off my extremely crude estimates are from whatever internal cost analysis they've done, as well as whatever the CBO or third-party think tanks may come up in the future.

It's also important to keep in mind that this legislation has zero chance of being passed and signed into law until 2021, which means Year 1 would be 2022 at the earliest. That's important for purposes of population size, inflation and so forth.

OK, so the first thing to figure out is the gross cost of such an overhaul. That is, how much would it cost if there were no cost sharing of any sort for anyone enrolled in the program, "Medicare for All"-style. Remember, Med4America would start out essentially as a robust public option added to the existing ACA exchanges, along with some beefed-up subsidies. The ACA is expected to spend around $126 billion on APTC subsidies in 2022 & 2023 combined (remember, CSR reimbursements have been cut off and rolled over into additonal APTC subsidies instead). Expanding & enhancing the subsidies to another 5 - 10 million people or so might double this amount for those first two years, so let's call it an additional $125 billion for years 1 and 2.

It's year 3 (2024) where the Med4America program proper would really kick into effect, including the addition of dental, vision and optical coverage, long-term services & support and so forth. Year three is when the existing Medicare enrollment base, the existing ACA individual market, the existing "junk plan" market and the 30 million or so uninsured would be transferred over to the new program. It's also when newborn children and those newly turning 65 would be auto-enrolled. This should amount to perhaps 30% of the entire population in years 3 & 4.

Year 5 (2026) is when the new Med4America program would absorb the existing Medicaid/CHIP program. This, combined with the ability of small businesses to voluntarily transfer their employees over to the new program (or for employees of those businesses to do so on their own) should mean that at least 55% of the entire U.S. population would have been shifted over to Med4America by that point, or around 192 million people as of 2026.

Year 7 is the point when large employers would have the option of moving employees over and paying a flat 8% payroll tax, but that's a complete unknown, and all of the major features of the program (as well as all mandatory transferees) would already be in place, so I'm using that Year 5, 55% enrollment marker as my baseline. That is, I'm going to try and figure out how much Medicare for America might cost in that year, then work backwards and forwards to figure out the full, 10-year cost.

According to the National Health Expenditure Report, by 2026 the total U.S. population will have grown to around 350 million people, and total national health expenditures (under current law) will have grown to around $5.65 trillion per year, or over $16,000 per person. That's around 48% more than this year, by the way. Current Medicare enrollees (primarily those over 65) cost a good three times as much on average per capita to treat than those under 65 do, and they'd make up a disproportionate chunk of that 192 million (around 34% vs. just 19% of the total population), so I'm going to assume an average base cost per Med4America enrollee of perhaps $20,000 apiece in 2026.

If so, that would make the grand total gross cost for treating all 192 million people around $3.84 Trillion for that year.

IMPORTANT: This assumes no cost savings from lower healthcare provider reimbursement rates, reduced expenses thanks to improved preventative care, reduced ER visits since no one would have to rely on the emergency room for basic services, increased efficiency and so forth.

OK, that's the relatively easy part. Now we have to subtract:

Again, according to NHE projections, under current law, the U.S. federal and state governments combined are expected to spend around $1.34 trillion on Medicare and $937 billion on Medicaid in 2026. In addition, the CBO projects roughly $74 billion in ACA premium subsidies + Basic Health Program spending combined by the federal government in 2026.

Subtract those out and you're down to around $1.489 trillion for 2026 specifically.

Now comes the trickiest part: How much would the actual enrollees themselves be contributing in the form of premiums and out-of-pocket spending?

Well, let's take another look at how the Med4America premium/cost sharing formula would work:

I put together a simple table which boils the above down to what I think it would look like: 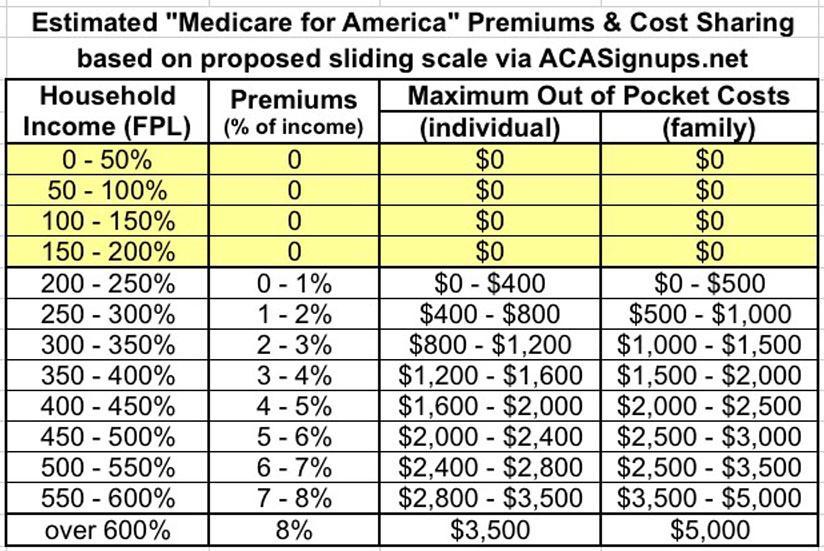 My friend and fellow healthcare wonk Andrew Sprung pointed me towards this 2017 U.S. Census Bureau report where it breaks the U.S. population down by household income bracket relative to the Federal Poverty Level (page 28): 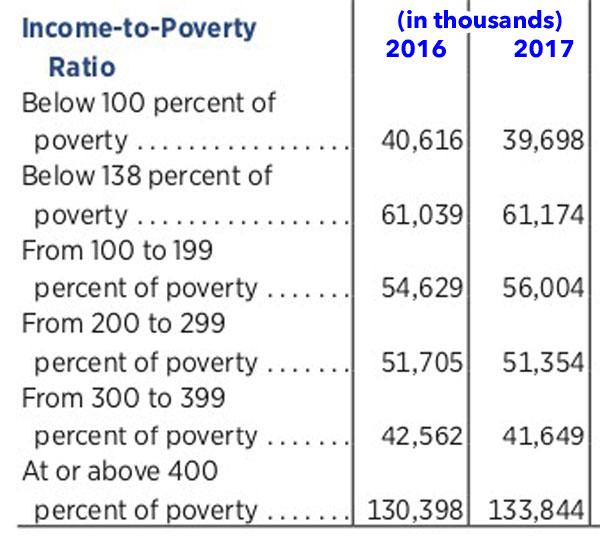 If you adjust for population size (remember, we're assuming 350 million people as of 2026), that's:

If we assume the 55% of the population which would be enrolled is representative within each group (which it likely wouldn't be), that translates into:

I have been able to roughly break out the average household size, by income level, based on different birth rates at income levels. Combining the link above with this excellent American Housing Survey database tool (again, a big shout-out to Andrew Sprung for the link!), I get the following: 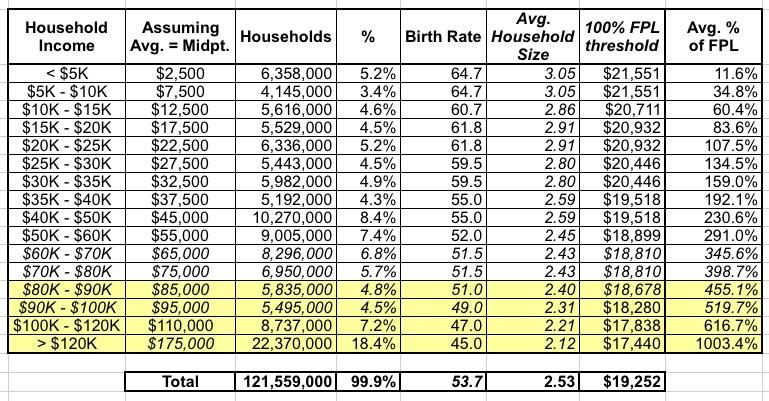 Again, I'm not sure what the actual income distribution is within these income brackets, but if you take the midpoint of each, you get:

But what about those earning more than 700% FPL? Again, unfortunately I have no idea what the spread is. For purposes of this analysis, I'm going to assume an average household income of 850% for this portion of the population, which would be around $150,000 for an average 2.1 person household in 2026.

Multiply it all out and you'd get something like the following. First, premiums:

Next, co-pays and coinsurance. I'm going to assume that all 192 million average say, 80% of their Maximum Out of Pocket amount. Is this realistic? I haven't a clue, but if so, that'd give you:

Subtract that from $608 billion and the final, net additional federal spending needed for 2026 specifically would be around $470 billion at the low end.

If you tack on another 20% to account for the huge variables and unknowns, you'd be looking at around $560 billion at the high end.

Click the table below for a higher-res version which boils down all the above methodology and assumptions:

Using this as a rough baseline for 2026 specfically (and throwing on another $30 billion or so just for the hell of it), I've also gone ahead and retrofitted Years 3-4 and years 6-10 to give a very rough projection about what the 10-year CBO score might look like from 2022 - 2031. Note that I'm assuming that there isn't any significant transfer of employees working for large companies...the assumption here is that the only additional enrollment growth after Year 6 would come from normal population growth (newborn children, people turning 65, etc).

Assuming I'm reasonably close in all my estimates (which, again, is a huge assumption), my very rough estimate is that it'd cost somewhere between $4 - $4.8 Trillion in additional federal spending over a decade.

This may sound low, but it's important to keep in mind that:

Again, I could be wildly off on many of the above assumptions. If anyone has reliable, comprehensive data which is significantly different from any of my numbers above, feel free to send it my way and I'll consider re-running my analysis. I think I'm somewhere in the ballpark, though.