Every year for 4 years running, I've spent the entire spring/summer/early fall painstakingly tracking every insurance carrier rate filing for the following year to determine just how much average insurance policy premiums on the individual market are projected to increase or decrease.

The actual work is difficult due to the ever-changing landscape as carriers jump in and out of the market, their tendency repeatedly revise their requests, and the confusing blizzard of actual filing forms which sometimes make it next to impossible to find the specific data I need.

The actual data I need to compile my estimates are actually fairly simple, however. I really only need three pieces of information for each carrier:

In other words, I've had a pretty good track record of accurately projecting average premium increases for the upcoming year for four years in a row.

Well, it's now May 2019, and after Virginia being the first state out of the gate with their preliminary rate filings for the following year, I'm surprised to see Maryland has beaten them to the punch for 2020:

Health insurance carriers are seeking a range of changes to the premium rates they will charge consumers for plans sold in Maryland’s “Individual Non-Medigap” (INM) and “Small Group (50 or fewer contracts)” (SG) markets in 2020. The rates submitted by the carriers for the INM market include the estimated impacts from the state-based reinsurance program (SBRP) enacted in 2019 via a 1332 State Innovation Waiver (approved by the Centers for Medicare & Medicaid or “CMS”).

The Maryland Insurance Administration (“MIA”) has posted rate filing documents at www.healthrates.mdinsurance.state.md.us. On that website, consumers can review filings and submit comments, as well as find answers to frequently asked questions about the rate review process. A detailed set of exhibits are attached that outline all proposed rates submitted by carriers, to include stand-alone dental coverage.

“We are pleased with the rates that have been requested. It is obvious that the federal waiver and reinsurance plan crafted by Governor Hogan and the legislature have provided the positive results as intended,” said Insurance Commissioner Al Redmer, Jr. ”It’s important to remember that these rates are what companies have requested, and not necessarily what will be approved. There will be a thorough review of all the filings. As in years past, we may require changes.”

In Maryland, for health benefit plans, only those rates approved by the Insurance Commissioner may be charged to policyholders. Before approval, all filings undergo a comprehensive analysis of the carriers’ analyses and assumptions. Public comments are considered as part of the review process. By law, the Commissioner must disapprove or modify any proposed premium rates that appear to be inadequate or excessive in relationship to the benefits offered, or are unfairly discriminatory. The MIA expects to issue decisions about rates for 2020 INM and SG products no later than mid-September. A public meeting will be held on July 16, 2019 from 2 p.m. – 4 p.m. at the Maryland Insurance Administration to seek comments on the proposed rate filings; a notice will be forthcoming.

SUMMARY OF PROPOSED RATES FOR 2020

It's important to keep in mind that while a 2.9% average premium reduction is a good thing, it would be even lower if the individual mandate hadn't been repealed. For Maryland, I estimate that reinstating the Individual Mandate Penalty would result in premiums 10.6% lower (around $42/month per unsubsidized enrollee).

In any event, assuming the preliminary rate changes are approved as is, I'd expect 2020 ACA exchange policies to average around $536/month. 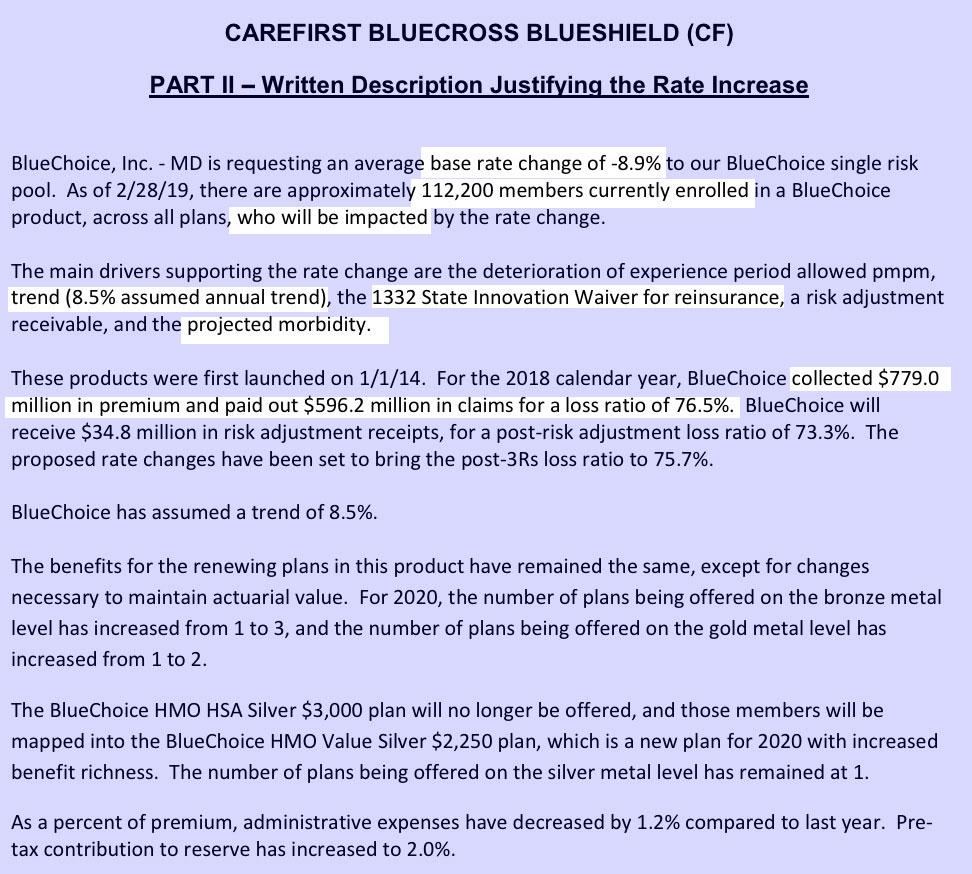 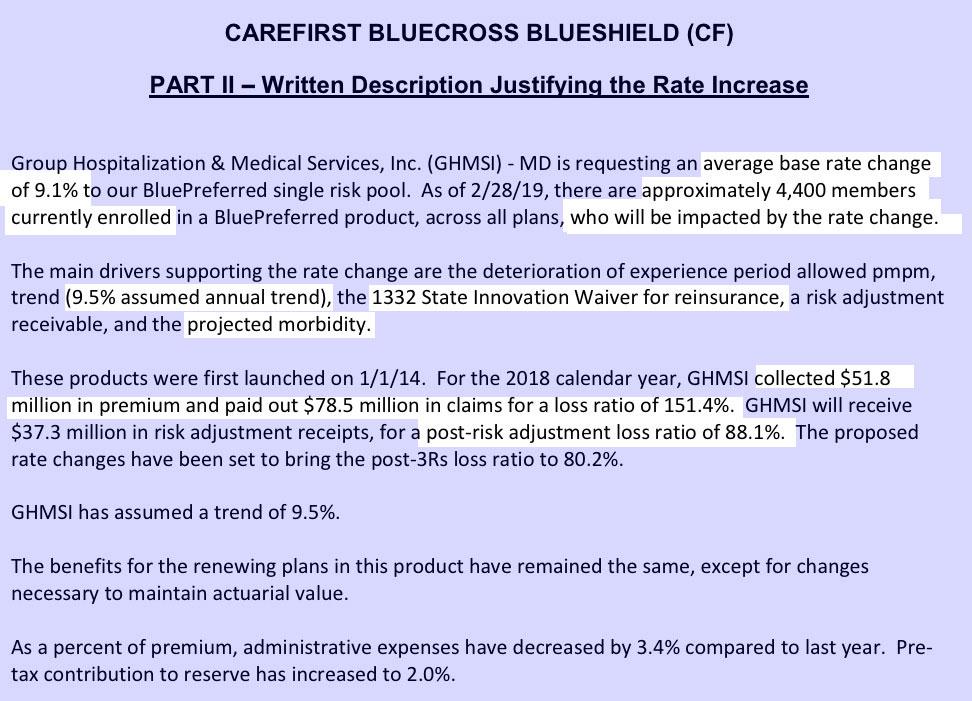 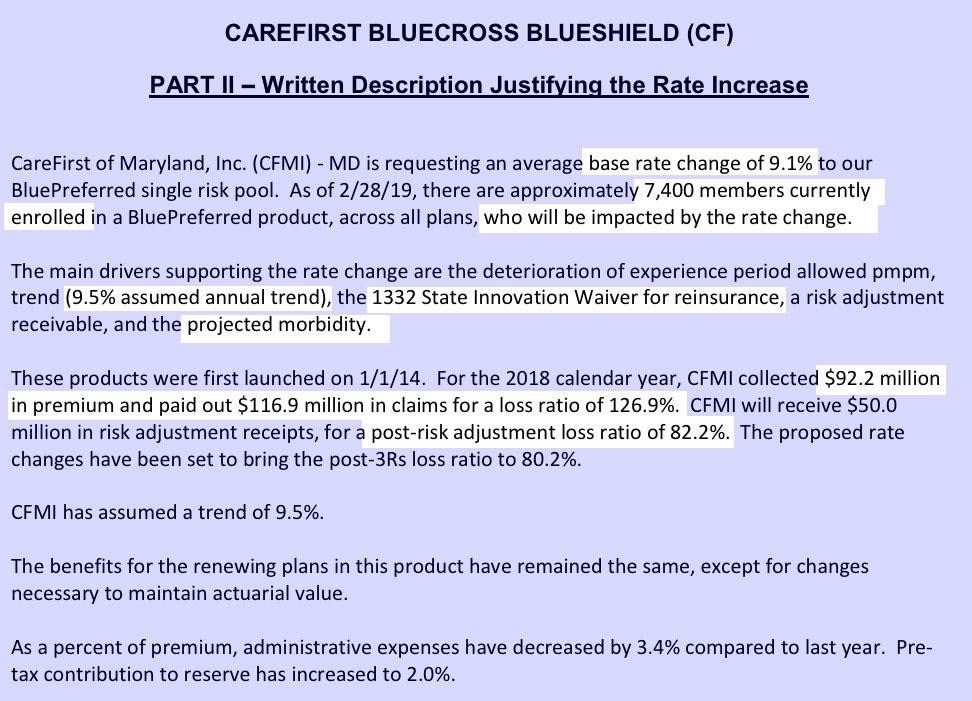 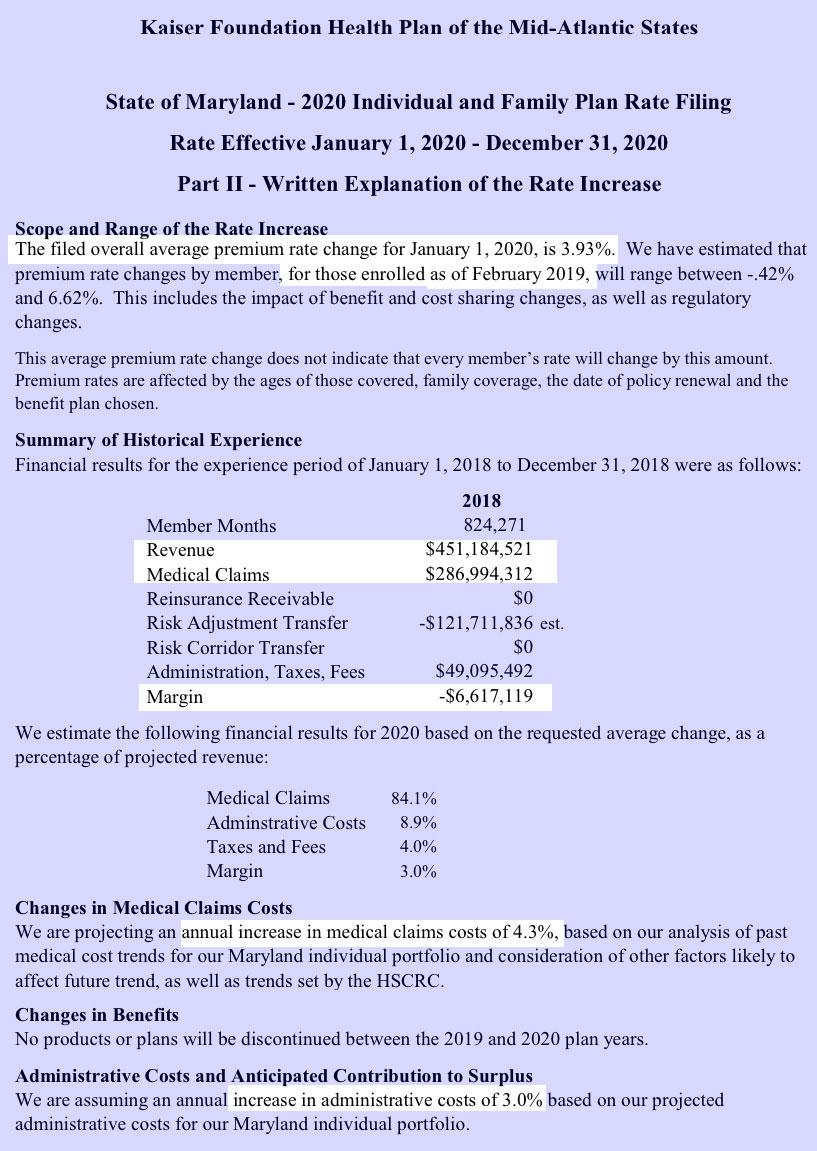