So much crazy healthcare policy/legal news is happening this week I'm having trouble keeping up.

And since I was too swamped with other stuff, I didn't have a chance to write about it until now. A bunch of other outlets have already posted the details, so here's Dylan Scott of Vox.com to save me the trouble:

A federal district judge has blocked Medicaid work requirements approved by the Trump administration in Arkansas and Kentucky.

Judge James Boasberg, who previously ruled on technical grounds against work requirements in Kentucky, blasted the Trump administration in two decisions Wednesday for failing to consider how many Medicaid beneficiaries would lose coverage under the states’ proposals to require that recipients work in order to receive their benefits. He deemed the approvals of those proposals by the administration to be “arbitrary and capricious” and said that the work requirements could not be allowed to remain in effect.

The rulings are a major loss for the Trump administration on one of its signature health policy crusades: introducing work requirements to Medicaid, the country’s largest health insurance program.

Arkansas was the first state to be allowed to implement Medicaid work requirements and, as a result, nearly 20,000 people have lost health coverage there.

...Policy experts have argued from the start that work requirements were contrary to Medicaid’s purpose of providing health coverage to low-income Americans and that most people who are on Medicaid and can work already do work.

...Boasberg took the unusual step of ruling that the work requirements be halted immediately.

This is excellent news...but there was more to come.

First, in Idaho, where voters passed straight Medicaid expansion by a wide margine last November only to have GOP lawmakers trying to screw with it by cutting nearly half the enrollees out of the loop and yes, adding work requirements to the other half, this happened later on yesterday afternoon:

The Senate Health and Welfare Committee voted 7-2 to hold in committee a House bill that would create a work requirement for Medicaid expansion beneficiaries — after lawmakers found out during the hearing that a federal judge had just struck down Medicaid work requirements in Kentucky and Arkansas.

Meanwhile, a Senate bill that would create a voluntary job training requirement for Medicaid expansion beneficiaries is still in that chamber’s amending order and could come up soon. The Medicaid budget for 2019-2020 is still being held in the full House. And Gov. Brad Little has said he won’t let lawmakers adjourn for the year until Medicaid expansion and funding is resolved.

...Jane Perkins, lead counsel in the Kentucky and Arkansas cases, wrote in a legal analysis that Idaho’s proposal is also likely illegal and her group would “pursue all enforcement options in collaboration with state partners” were it to pass.

“Idaho has the opportunity to learn from the actions of other states,” she wrote. “Rather than implement a program that will soon be declared illegal in federal court, Idaho should save itself the exercise, along with hundreds of thousands in taxpayer dollars and, instead, implement a clean Medicaid expansion as passed by the voters.”

But wait, there's still MORE! Iowa actually implemented ACA Medicaid expansion way back in 2014, I believe, and it's been chugging away for five years now, but that didn't stop GOP lawmakers there from also trying to tack on work requirements.

And yet, shortly after the Idaho story broke, we had this happen:

A set of public assistance bills, including a proposal to add work requirements to Iowa's Medicaid program, are unlikely to become law this year, according to key Republican lawmakers.

Rep. Shannon Lundgren, who chairs the House Human Resources Committee, told the Des Moines Register she will not bring up three public assistance bills that were sent to her committee from the Senate. Republicans control both chambers of the Iowa Legislature.

Those bills would have required some people on Medicaid to work in order to receive health benefits; required recipients of government food assistance to comply with child support; and allowed law enforcement to prosecute people found with multiple electronic benefits cards that are not theirs.

The bills would have needed to advance out of Lundgren's committee by next week to survive a legislative deadline. While there are other ways for a policy bill to remain alive for the session, her lack of support effectively kills their chances.

...Similar legislative efforts in other statehouses in recent years have become tangled in litigation. On Wednesday, a federal judge struck down Medicaid work rules in Arkansas and Kentucky.

Mary Nelle Trefz, a lobbyist for the Child and Family Policy Center, said she believes the Iowa measures wouldn't prevent fraud but are likely to create additional red tape that could cause Iowans to lose their benefits.

On the one hand, this is fantastic news...and it will likely have major implications for similar Medicaid work requirement waivers in other states. Here's a full list of which states have submitted waivers and what the status is in each one before yesterday's ruling:

Aside from whether Arkansas or Kentucky find a way to restart their work requirement program again or not, what happens in the 13 other states listed here. Six of the seven states with pending waivers haven't expanded Medicaid yet anyway...the seventh is Utah, which, like Idaho, was supposed to have expanded Medicaid "cleanly" last November but which, again, had that screwed with by Republicans in the state legislature.

What about states like Arizona, Ohio, Wisconsin and my own state of Michigan, where work requirement waivers have already been fully approved but not enacted yet?

Finally, what about Indiana and New Hampshire, where, like Arkansas, they've already started kicking people off the program for failure to comply with the requirements?

Some of these states will likely kill expanding Medicaid in their states at all...but what happens in states which have already have Medicaid expansion for years, like Michigan, but which are scheduled to add work requirements in the future?

If the expansion program stays in place minus the work requirements, that's FANTASTIC news.

If, however, killing work requirements also means killing the rest of the waiver and thus killing expansion altogether...that'd be a disaster. In Michigan alone, some 690,000 people--over 7% of the state population--would be kicked to the curb.

UPDATE: I went ahead and just put the question out there, and U of M law professor Nicholas Bagley, who's considered an expert on all things ACA-related, chimed in with the answer: 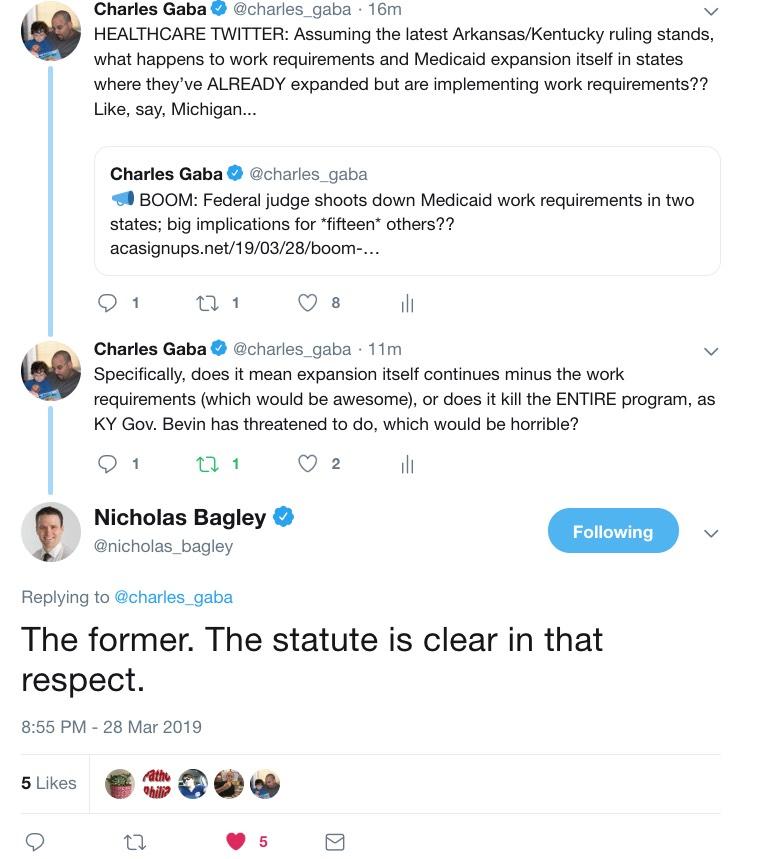