UPDATE: No biggie. Just the President proposing to slash healthcare by $2.7 Trillion.

No, it won't go anywhere with the House held by Democrats, but even so:

President Trump is releasing a $4.7 trillion budget plan Monday that stands as a sharp challenge to Congress and the Democrats trying to unseat him, the first act in a multi-front struggle that could consume Washington for the next 18 months.

The budget proposal dramatically raises the possibility of another government shutdown in October, and Trump used to the budget to notify Congress he is seeking an additional $8.6 billion to build sections of a wall along the U. S.-Mexico border.

Trump’s “Budget for a Better America” also includes dozens of spending cuts and policy overhauls that frame the early stages of the debate for the 2020 election. For example, Trump for the first time calls for cutting $845 billion from Medicare, the popular health care program for the elderly that in the past he had largely said he would protect.

His budget would also propose a major overhaul of Medicaid, the health care program for low-income Americans run jointly with states, by turning more power over to states. This would save $241 billion over 10 years.

Oh, but of course there's more:

...More broadly, Tump’s budget would impose mandatory work-requirements for millions of people who receive welfare assistance while dramatically increasing the defense budget to $750 billion next year, a 5 percent increase from 2019.

Not much else for me to say, really.

UPDATE: Hmmm...ok, apparently I'm gonna have to read over the actual budget details, because it looks like it'd slash Medicaid a lot more than listed above, along with a whole mess of other healthcare-related stuff:

By my count that's around $2.7 Trillion over a decade when you include the CDC & NIH in the mix. Gee, I guess he found a way to "pay" for the utterly unnecessary and reckless tax cuts after all.

Budget debates work best when we play it straight with the numbers. This chart shows how deeply many agencies are cut. 6/6 #TrumpBudget 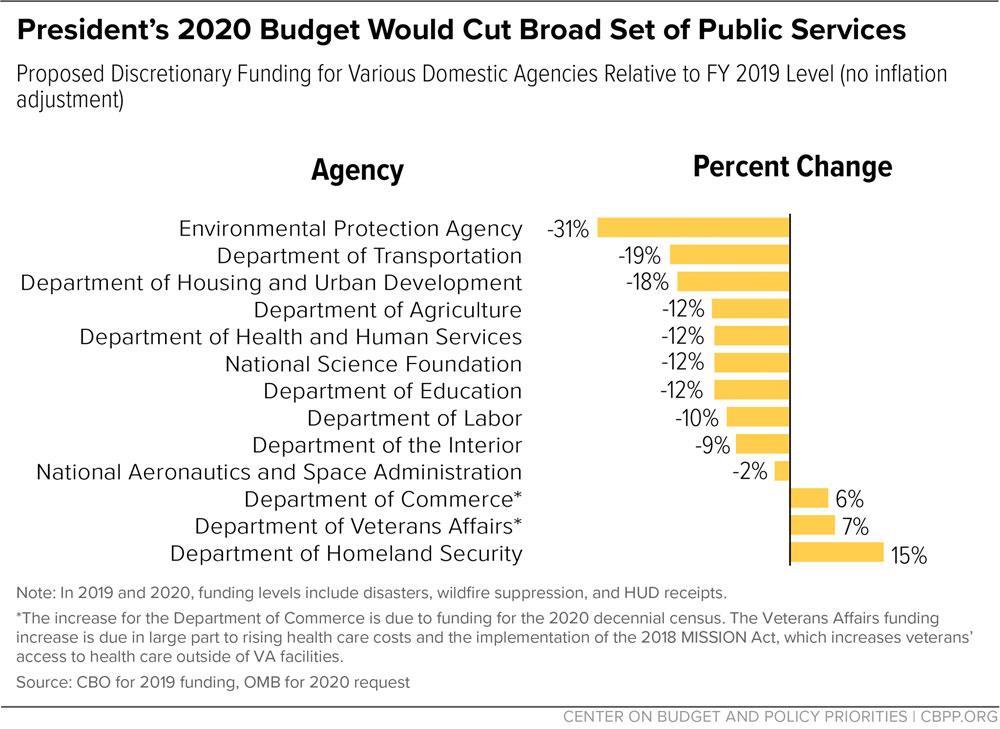