I can almost guarantee this: They will not go for Medicare for All at this time, for several reasons. First of all, there's a big difference between a bill being unlikely to become law and a bill having zero chance of becoming law. I'm sure there will be all sorts of prep work done on various types of M4A-like bills based on existing white papers, etc., but I'm fairly certain that no bill containing a complete overhaul of the entire U.S. healthcare system will be passed by Democrats until they also retake the Senate (and most likely not until they retake the White House as well). This even includes the not-quite-as-sweeping "Medicare Extra" proposal which is how I'd prefer to see us proceed at the federal level. In the meantime, most of the healthcare policy action will most likely be done at the state level.

So what will the House Dems pass instead? That's the subject of this Politico story by Alice Miranda Ollstein and Adam Cancryn:

House Democrats who swept back into power on the promise to protect people with pre-existing conditions face tough legal and political choices as they try to make good on that vow.

Those promises galvanized millions of voters. But now, like the Republicans previously elected on promises to repeal and replace Obamacare, they face the formidable challenge of turning campaign rhetoric into reality.

And with the Senate and White House still in Republican hands, Democratic leaders have only one surefire weapon in their arsenal: a resolution to jump into the court fight over Obamacare’s consumer protections. That would empower the House Counsel to intervene in the lawsuit brought by 20 conservative state attorneys general that threatens to abolish the health care law.

This is, of course, the infamous (and insanely stupid) #TexasFoldEm lawsuit filed by 20 Republican Attorneys General and Governors last summer, and which right-wing Judge Reed O'Connor stated he'd rule on "quickly"...86 days ago and counting. No one knows whether he'll strike down the entire ACA, "only" the ACA's consumer protections (which would make many other parts of the ACA logistically unworkable), or nothing at all (least likely). In addition, no one knows whether his ruling, whatever it proves to be, would go into effect immediately on January 1st, 2019 (least likely), a year from now on January 1, 2020 (more likely) or whether it would be stayed pending a final ruling by the U.S. Supreme Court (most likely).

In the meantime, it's Sword of Damocles time again for everyone.

...Beyond that, their strategy is still up for grabs: Several key Democrats promise a more confrontational approach that includes early showdown votes with Republicans in Congress over the law’s future. First on that agenda: legislation strengthening Obamacare’s popular pre-existing condition protections that would force GOP lawmakers to go on record for or against a law that many worked for years to kill.

I absolutely agree with this. The article goes on to quote various Dem sources who are wringing their hands over whether to intervene in the lawsuit or to pass a bill locking in those protections. Perhaps I'm hopelessly naive, but I fail to understand why it has to be one or the other. There's a lot of talk about limited resources and "muddying the message", but it seems pretty straightforward to me: "We're gonna fight against this idiotic lawsuit, but we'll also pass this protection bill just in case." If the lawsuit successfully strips away ACA protections and the House Dems bill "languishes in the Senate", that would be 100% on the GOP, not the Dems, who will have done everything possible to protect them.

In interviews over the past couple weeks, Democrats and aides have floated additional policy priorities that could be included in a broader health care bill, from restricting the sale of short-term plans that don't comply with Obamacare standards, to boosting funding for Obamacare outreach, to writing new provisions aimed at lowering insurance costs.

Finally, the article gets to the heart of the matter: The "ACA 2.0" bill (that's my name for it, not theirs) which was introduced back in March:

Earlier today, three House Democrats (Rep. Frank Pallone, Rep. Bobby Scott and Rep. Richard Neal) introduced a new bill, called the "Undo Sabotage and Expand Affordability of Health Insurance Act of 2018" (or "USEAHIA"...really guys?), which includes a half-dozen of the bullet points from my "If I Ran the Zoo" list...and a whole lot more...

I wrote up an overview of the proposed bill at the time, and later a similar overview of the companion ACA 2.0 bill proposed by Senate Democrats (I don't know if the Senate version is technically a "companion" bill, but it sure as hell looks like it to me, and it came out just two week after the House version).

Both versions of the bill include the following:

Beyond that, there are some differences between the two.

In addition to the list above, the House version would:

In addition to the list above, the Senate version would:

Whew! That's quite a list, and while some of the items are fairly minor, some are pretty significant. The table below compares the two side by side, and also includes some other recommendations from my own "If I Ran the Zoo" wish list which didn't make the cut of one or both of them.

In the table, the pink items are the ones which are necessary because they've been deliberately sabotaged, undermined or stripped away by the Trump Administration, Congressional Republicans or both. The rest of the list are things which either fix problems which existed before Trump took office or which strengthen provisions which are working well.

Ironically, you'll notice that there's one important sabotage move not restored by either bill: The individual mandate penalty, which is itself the entire basis of the #TexasFoldEm lawsuit in the first place. There's a simple reason for this: It's simply too politically hot to handle at the federal level. Massachusetts never repealed their pre-ACA mandate penalty; New Jersey, DC and Vermont have all managed to reinstate it locally (Vermont's won't kick in until 2020); and a handful of other states are considering doing so as well...but at the federal level, it would be an incredibly tough slog which even the most die-hard ACA supporters would probably be pretty reluctant to push for again.

The other important thing to note is that I've added three new items at the bottom of the list...namely, re-codifying the ACA's Guaranteed Issue, Community Rating and Essential Health Benefit protections. These are the items most at risk from the #TexasFoldEm case (assuming the judge doesn't strike down the entire law, that is). 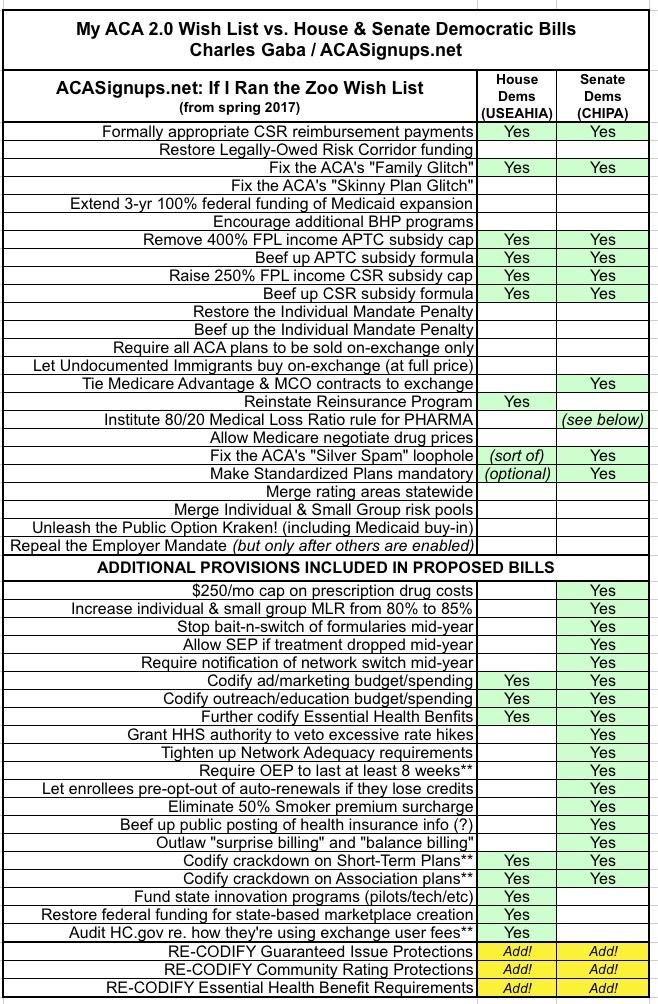 Obviously there's no chance of a bill including all or even most of these provisions through the Senate and Trump's veto pen. He's certainly not going to sign a reversal of his own #ShortAssPlan expansions, for instance...but then again, he has utterly no real policy in mind regardless other than whatever makes him look good or which he can take credit for, and he completely abandons his prior "policy" with the wind anyway, so who the hell knows?

Of course, restoring CSR payments, removing the 400% FPL cap, making the subsidy formula more generous and placing a $250/month cap on prescription drug costs would cost a lot of money, right? Well, yes and no. It's important to keep in mind that due to the way that the CSR payment and APTC subsidy formulas interact with each other, restoring CSR reimbursement payments would actually SAVE around $194 billion over 10 years.

That's right: An average of $19.4 billion per year would be effectively freed up to do things like...remove the 400% FPL cap and beef up the subsidy formula for all involved. Doing both of those, along with a drug cost cap, fixing the Family Glitch (which would add a couple million more people to the ACA exchange roles) and so forth would probably still cost more than $19.4B/year, but I'd imagine at least 2/3 of the cost would be covered. Of course, the GOP just punched a $1.5 trillion hole in the deficit with last year's tax cuts, so it's not like they're in any position to complain about "fiscal discipline" these days anyway.

The serious negotiations would likely be between Nancy Pelosi and Mitch McConnell, and while the list above would never be agreed to, I could see a stripped-down version having a tiny chance of making it through along the lines of the following...including the three pre-existing condition protections: 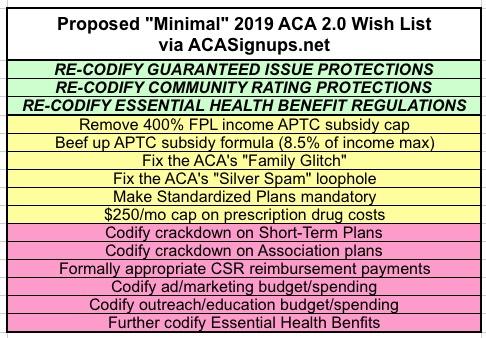 Still wishful thinking? Perhaps...but keep in mind that the 2020 Senate landscape is pretty ugly for the GOP, and Trump is gonna have his hands full with all sorts of investigations...

Hey, a guy can dream, right?

UPDATE 12/09/18: I've been informed that the concern about baking in ACA protections into a separate bill potentially jeopardizing the defense in the #TexasFoldEm lawsuit is more realistic than I thought. If so, then fine...leave that part out for the time being...but still go ahead with the other provisions listed above in yellow and pink!