So my question is this: Where exactly did that money go?

For that matter, assuming HC.gov is set to bring in $300 million more this year, but doesn't plan on reinstating that $113 million for advertising/outreach, doesn't that mean they should be profiting by over $400 million? Again, if so, where is that money going?

...If this money is all going back into the HHS Dept's general fund, I guess that's OK...or, if they announce that they're lowering the 3.5% surcharge down to 3% or 2.5% or whatever to shave a few bucks off of the unsubsidized premiums, that's fine as well (although I'd rather they reinstate the ad/outreach funding).

However, according to the Proposed HHS Notice of Benefit and Payment Parameters for 2019 Fact Sheet...

Yes, that's right--not only is HC.gov going to keep charging 3.5% of premiums for the 34 states which are fully handled by the federal exchange next year, they're actually increasing the fee for the 5 "piggybacking" states by a point. In fact, this fee increase is exactly what is leading Nevada to move off of HC.gov onto their own exchange next year.

“The Administration’s record of undermining enrollment in the Marketplaces, including by cutting funding for vital functions such as marketing and outreach, as well as spending agency funds on ‘repeal and replace’ propaganda, raises questions about whether the dedicated funding is being spent effectively, legally, and appropriately to enhance Americans’ access to comprehensive health insurance,” the Democrats wrote.

Last year, CMS made the decision to gut funding for consumer outreach and assistance for enrolling in the Marketplaces, reducing funding from $100 million to just $10 million — a 90 percent cut.  The agency also slashed funding for navigator programs by 40 percent.

“Given the agency’s clear intent to undermine enrollment in the Marketplaces by reducing funding for vitally important Marketplace functions, it is unclear why CMS continues to charge states that use the federal platform a 3.5 percent user fee,” the Democrats continued in their letter to Azar and Verma. “Congress and the American public are entitled to understand how CMS is spending these funds, which likely represent billions of dollars in federal spending, and whether the agency is using them solely for the purpose of supporting the functions of the Federal Marketplace.”

As part of their inquiry, the Democrats are requesting a series of documents related to the Trump Administration’s use of user fees collected, including:

The Democrats’ letter is available HERE.

I don't know for certain whether any of the Democratic Congressmen or Senators were tipped off by my blog post, of course, but I do know that this issue was on the radar of Reps Pallone, Neal and Scott back on March 5, 2018...when the three members of Congress introduced what I termed their "ACA 2.0" bill:

Section 304 Promote transparency and accountability in the Administration’s expenditures of exchange user fees.

It is unclear how the Trump Administration is spending the funds raised from a user fee levied on issuers that is intended to be spent on exchange operations and outreach and enrollment, and whether all of those uses are appropriate. For example, during 2017, the Trump Administration appears to have spent agency money filming anti-ACA propaganda videos. The legislation requires HHS to submit an annual report to Congress that includes a detailed breakdown of the Department’s spending on outreach and enrollment, navigators, maintenance of Healthcare.gov, and operation of the Healthcare.gov call centers. 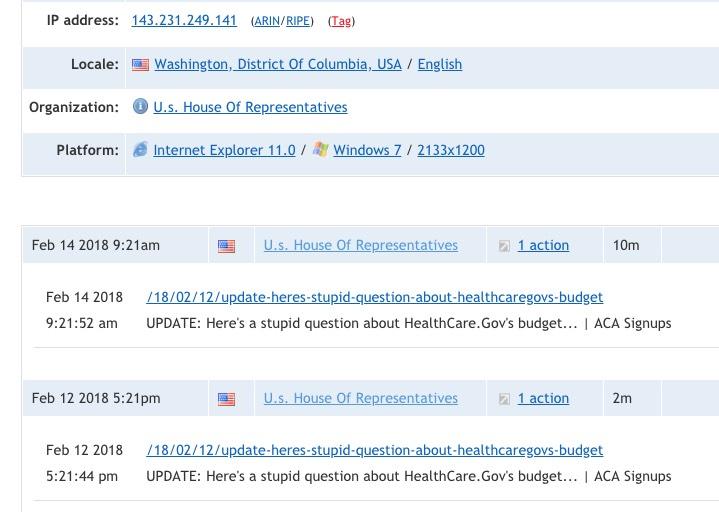