For 2018, these consisted mainly of Donald Trump's decision to cut off Cost Sharing Reduction (CSR) reimbursement payments to insurance carriers, along with a hodge-podge of other, smaller regulatory/administrative decisions which caused a lot of unease/uncertainty about the 2018 market landscape. These included slashing the Open Enrollment Period in half, slashing the HealthCare.Gov marketing budget by 90%, cutting the HealthCare.Gov outreach/navigator budget by 40%, instructing the IRS not to enforce the ACA's individual mandate penalty, repeatedly threatening in public to deliberately "blow up" or "implode" the ACA exchange market and so on.

My conclusion, based on a combination of actual filing statements by numerous insurance carriers themselves, estimates/projections by outfits like the Kaiser Family Foundation, the Urban Institute, the Commonwealth Fund and my own rough guesstimates, was that deliberate sabotage by the Trump Administration and Congressional Republicans caused average premiums for 2018 ACA compliant individual market policies to increase about 17 points nationally, with 14 points of that being due specifically to CSR payments being cut off and the other 3 points being due to the other factors above combined.

In actual dollars, this amounts to an additional $80/month or $960/year for unsubsidized enrollees, of which around $65/month is due specifically to the CSR cut off (around $780 apiece).

For 2019, the CSR cut off and other factors are already baked in, but there are additional sabotage factors being added: The individual mandate has been formally repealed by Congressional Republicans (signed into law by Trump), and the Trump Administration has not only stripped away at most regulations for so-called "Short-Term, Limited Duration" plans and "Association" plans, but is pushing hard for people to enroll in these non-ACA compliant, oftentimes "junk" plans.

My overall conclusion, again based on a combination of actual carrier filings, projections by Kaiser, Urban, press releases by state insurance commissioners and my own guesstimates, is that these factors are adding around 8% to average unsubsidized 2019 premiums nationally. Again, in dollars, that's around $50/month or $595 for the year apiece.

Combined, I estimate the 2-year impact of various GOP/Trump sabotage actions to total around $1,500 apiece with all the above factors included, or around $1,380 if you don't include the "sundry" items in 2018. Here's my estimates of the national averages for 2017, 2018 and 2019 under different scenarios. REMEMBER: These numbers apply to all ACA-compliant individual market policies nationally, whether purchased on or off the ACA exchanges: 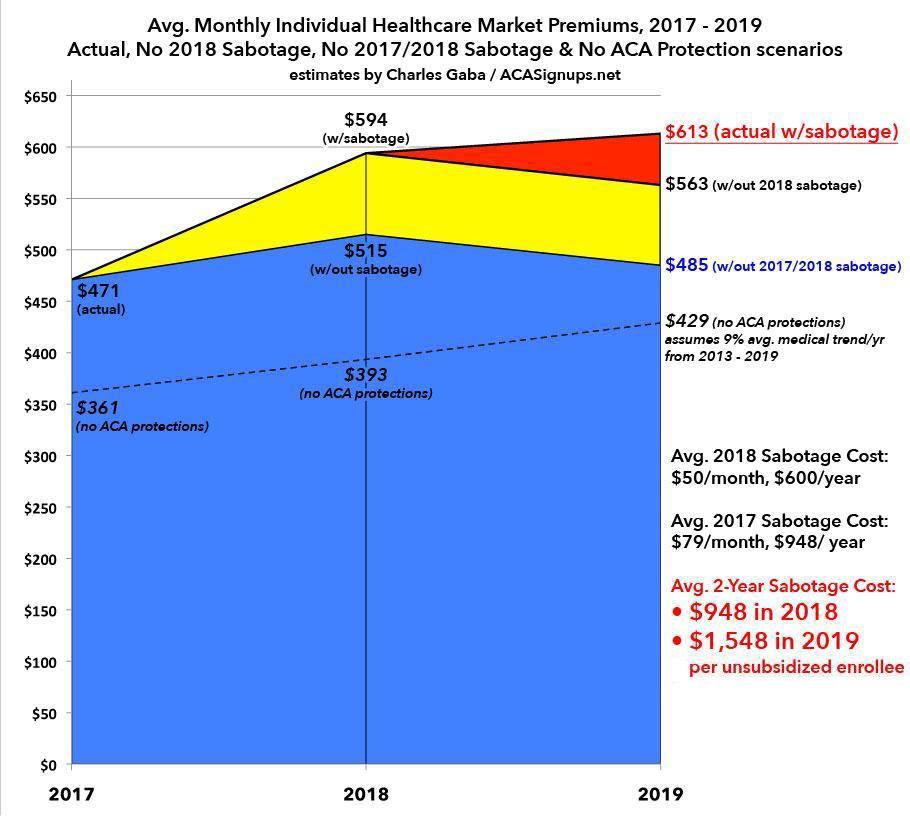 That brings me to today's big announcement by the Kaiser Family Foundation:

...With the effective repeal of the individual mandate penalty and the expansion of short term and association health plans, we set out to quantify how much of an upward effect these policy and legislative changes are having on 2019 premiums. Among insurers that publicly specify the effect of these legislative and policy changes in their filings to state insurance commissioners, we found that 2019 premiums will be an average of 6% higher, as a direct result of individual mandate repeal and expansion of more loosely regulated plans, than would otherwise be the case.

Adding the impact from the loss of cost-sharing reduction payments – which drove up silver premiums by an average of 10% according to the Congressional Budget Office – to the impact from individual mandate penalty repeal and expansion of more loosely regulated plans, this analysis suggests on-exchange benchmark silver premiums will be about 16% higher in 2019 than would otherwise be the case.

...Going into 2018, insurers on average likely increased rates more than was necessary. As of mid-2018, insurers in the individual market are doing quite well financially on average, so many are unable to justify another year of premium increases going into 2019. Therefore, despite repeal of the individual mandate penalty and expansion of more loosely regulated plans in 2019, premiums in much of the country are holding flat or decreasing relative to 2018. In states that use healthcare.gov, unsubsidized benchmark premiums are dropping an average of 1.5% next year, from $502 per month for a 40-year-old in 2018, to $495 in 2019.

Our analysis therefore suggests the average healthcare.gov benchmark silver premium for a 40-year-old would be approximately $427 per month (instead of $495) in 2019, if it were not for the repeal of the individual mandate penalty, expansion of short-term plans, and loss of cost-sharing subsidy payments.

It's important to understand that Kaiser's analysis and dollar estimates and my own aren't an apples to apples comparison. They're looking at the benchmark Silver plans only, available in the 39 HealthCare.Gov states only, and of course the dollar amounts are specifically for a 40-year old adult, which is younger than the average ACA market enrollee anyway (I think it averages around 48 or so this year). By comparison, my own analysis looks at all plans for every metal level (bronze, silver, gold and platinum, though there are hardly any platinum plans available anyway), both on exchange and off, for all 50 states +DC.

HAVING SAID THAT, Kaiser concludes that overall, 2018 benchmark premiums were bumped up about 10 points due to CSR cut-off, while 2019 premiums are about 6% higher as a result of mandate repeal + #ShortAssPlans being expanded. They conclude that #ACASabotage factors have caused unsubsidized 2019 benchmark policies to cost around $68 more per month, or $816 more for the year per enrollee.

As for off-exchange enrollees (all of whom are unsubsidized by definition), Kaiser's conclusions are understandably a bit more complicated:

Looking ahead to 2019, premiums in much of the country are holding flat or decreasing a bit, but unsubsidized off-exchange consumers on average will nonetheless pay an average of 6% more than they otherwise would have, if it were not for repeal of the individual mandate and expansion of more loosely regulated plans. On the exchange, meanwhile, subsidized customers will continue to pay sliding-scale premiums based largely on their incomes, and so the amount of premium they pay is mostly unaffected by the repeal of the individual mandate and expansion of short-term plans.

In short, depending on how you look at it and whose methodology you use, #ACASabotage by Congressional Republicans and Donald Trump are costing unsubsidized enrollees anywhere from $800 - $1,500 more apiece in 2019.

But hey, that one lady in Pennsylvania is saving $1.50 per week with her GOP tax cut, so I guess it all balances out in the end, right?