Reminder: The GOP has already wiped out Paul Ryan's Costco Hot Dog Deal...up to 10x over. 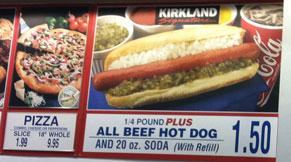 NOTE: The last few paragraphs of this post have been reformatted for clarity only.

All of Twitter is abuzz with this tweet (since deleted) by Republican Speaker of the House Paul Ryan:

A secretary at a public high school in Lancaster, PA, said she was pleasantly surprised her pay went up $1.50 a week ... she said [that] will more than cover her Costco membership for the year. https://t.co/yLX1Bod1j0

While Ryan deleted the tweet above (fear not...a whole mess of people took screen shots before he did so), he has yet to remove another tweet quoting another passage from the same AP article (I took a screen shot of this one in case he deletes it as well):

“I have heard time and again that the middle class is getting crumbs, but I’ll take it!” https://t.co/yLX1Bod1j0

Plenty of people have spent the past few hours ripping/mocking Ryan over the repulsive "Let them eat cake!" manner of these tweets, but I decided to take a look at the article in question. Sure enough, both are genuine quotes from an AP article in which the reporter apparently interviewed several folks who are happy as clams with the crumbs that Paul Ryan & Co. are providing them with:

Wayne Love, who works in managed care in Spring Hill, Florida, got an extra $200 in his paycheck last week, which he said will help offset a $300 increase in the cost of his health insurance.

“I have heard time and again that the middle class is getting crumbs, but I’ll take it!” Love said by email.

Julia Ketchum, a secretary at a public high school in Lancaster, Pennsylvania, said she was pleasantly surprised her pay went up $1.50 a week. She didn’t think her pay would go up at all, let alone this soon. That adds up to $78 a year, which she said will more than cover her Costco membership for the year.

Well, I'm glad to hear they're happy. I presume that Mr. Love gets paid monthly, not weekly (otherwise that'd be $9,600/year...plus, it says this will "help" offset a $300 increase in his insurance, which again, is presumably monthly).

It's easy to poke fun at the "$1.50 Costco membership!" quote, which basically allows her to buy a 1/4 lb. hot dog & drink at Costco every week (OK, she said it'd cover the membership, not actually buying anything, but whatever). Personally, I'm guessing that Ms. Ketchum might have been being sarcastic, but you never know.

However, I was more interested in Mr. Love's $300/month healthcare cost increase.

The article doesn't specify whether he's covered via employer-sponsored insurance or on the individual market, or whether that $300 covers just him or his whole family, but for the moment I'll assume he's on the individual market. I'm also assuming Mr. Love earns too much to receive ACA tax credits, since those who do generally see a nominal rate increase or, for many, a net premium decrease this year thanks to Silver Loading.

It's no secret that unsubsidized premiums on the individual market shot up dramatically this year--an average of around 30% nationally. In Florida, where Mr. Love lives, it's even higher: Nearly 45%. Ouch. Of course, nearly half of that increase was caused specifically by Donald Trump and the GOP killing off CSR reimbursement payments.

In other words, there's a very good chance that about $150/month of Mr. Love's 2018 insurance premium increases were specifically and deliberately caused by Donald Trump and Congressional Republicans. Again, in Florida it's actually more like 2/3 of it, but I'll be generous and go with the national ~50% average. That wipes out 75% of his increased paycheck right out of the gate.

However, let's set that aside for the moment--the CSR issue is complicated and a bit murky, since cutting off those payments unintentionally ended up helping more people than it hurt via the quirks of Silver Loading.

Instead, consider the repeal of the individual mandate by the GOP. According to the Congressional Budget Office, mandate repeal will lead to an estimated 10% average unsubsidized rate increase in 2019.

Since average unsubsidized 2017 individual market premiums were around $470/month in 2017, the ~30% hike this year means they're likely in the neighborhood of around $611/month for 2018. That's pretty close to the conclusion of HealthPocket, which pegs the average 2018 premiums at the following depending on the enrollee's age (they peg average Silver plans at $477 - $1,140 depending on age, and 71% of enrollees were in Silver last year).

That's right: Even the Republican Party's limited ACA sabotage is already going to cost people like Mr. Love 40% more than however much they're saving in taxes.

Note that this assumes that he won't have to pay most of that $2,400 back when he files his taxes in April 2019 due to the very concerns raised in the article itself:

Senator Ron Wyden, on the Senate Finance Committee, and Rep. Richard Neal, on the House Ways and Means Committee, both Democrats, have asked the Government Accountability Office to analyze the new tables to make sure workers’ paychecks weren’t being systematically underwithheld, which would make paychecks bigger now but lead to a bigger bill at tax time. Mnuchin, speaking at a White House press briefing, dismissed this notion as “ridiculous.”

Still, experts suggest that all taxpayers take a look the new IRS calculator when it becomes available later in February to ensure they are having the correct amount withheld. And they should update the information on their W-4 after the IRS releases a revised version later this year.

...However, someone who got a raise may face a higher tax rate as a result. And some corporations have been handing out bonuses and wage increases in reaction to passage of the law. A worker’s net pay may also fall if other factors that go into their paycheck changed — such as an increase in health insurance premiums or higher state taxes.

As for Ms. Ketchum, she works for a public school system, so I'm assuming she has employer benefits via the Lancaster, PA School District. If so, bully for her.

If she doesn't, however, then assuming she paid the $470/mo average last year, if she's unsubsidized, the extra 14 percentage points caused by the CSR cut-off tacked on this year added around $66/month, or $792/year to her premiums, wiping out her extra $78 by a factor of ten. Throw in the mandate repeal increase next year and that's another $732, for an average deliberately caused and utterly unnecessary increase of about $1,524/year, or nearly 20 times her $1.50 per week "bonus".

Granted, this is a bit hyperbolic: Thanks to the Affordable Care Act (otherwise known as "Obamacare", remember), if Ms. Ketchum earns less than 400% of the federal poverty line (which I presume she does, or else she wouldn't be so thrilled with an extra $1.50/week), she would qualify for tax credits, which would prevent her from being hit with that extra $1,500...that is, assuming her insurance carrier doesn't just give up in disgust at the constant GOP sabotage of the law.

UPDATE: Sure enough, it appears that Ms. Ketchum was either being flat-out sarcastic or at a minimum, tongue-in-cheek snarky after all:

CBS News' David Begnaud spoke to Julia Ketchum, the secretary, on Saturday after Ryan's tweet. She said she was "really surprised" that Ryan highlighted her comment.

"The paragraph above me, and the paragraph below my quote -- those people got hundreds more and I got a $1.50 per paycheck more," Ketchum said. "So it shows me he may not have read the whole article."

Ketchum, who was on a field trip, said she did notice the extra money.

Don't get me wrong, some of the other quotes appear to be from people who are legitimately happy with the extra cash, so I can't rip on the reporter herself too much, but in the case of Ms. Ketchum, at least, it definitely sounds like she and Mr. Ryan have been taken in by something which is more commonly referred to as "yanking their chain" or "messing with their heads". I'm reminded of an old Doonesbury series:

If you find my work at ACA Signups of value, please consider supporting it via Patreon, GoFundMe or PayPal, thanks!