How much is TWO years of GOP Sabotage Tax costing in YOUR state?

Last year I estimated that the combined effect of various Republican efforts to sabotage the ACA caused average unsubsidized monthly premiums to increase by an additional $80/month on average nationally, or around $960 more for the full year per enrollee than they otherwise would have had to pay this year. The exact amount varied widely by state, region, metal level and actual policy, of course.

The 2017 sabotage efforts mainly included the cut-off of Cost Sharing Reduction (CSR) reimbursement payments, but also included a mish-mash of other efforts such as the Open Enrollment Period being cut in half, HealthCare.Gov's marketing budget being cut by 90%, HC.gov's outreach/navigator budget being cut 40%, confusion about whether or not the Individual Mandate would be enforced and, of course, the general confusion about whether or not the ACA itself would be repealed given the half-dozen efforts by Congressional Republicans to do so throughout the year.

This year, the Big Sabotage Factor is the Individual Mandate being officially repealed at the federal level. It's important to note that there's a big difference between not being sure whether or not it'll be enforced (most carriers assumed it would, some assumed it wouldn't, some added a point or two just in case) and knowing that there won't be any financial penalty for failing to enroll in ACA-compliant coverage the following year, which is the case for 2019.

Finally, there's the recent decision by the Centers for Medicare & Medicaid (CMS) to "freeze" Risk Adjustment fund transfers for an unknown period of time. So far I only know of one carrier (BCBS of Tennessee) to bake in additional premium increases specifically in response to the RA freeze, but there may be more to come.

So far. of the half the states which have actually released their preliminary 2019 rate filings, I'm estimating a national average "sabotage-induced" increase of roughly $52/month or $625 for the full year in 2019. Again, that's an additional $625 on top of whatever other premium increases or decreases there may be for other reasons (increases in medical trend, the carrier tax "holiday", improvement or worsening in the risk pool, state-based reinsurance programs and so on).

In some states, the average 2019 premium is projected to drop even with sabotage efforts factored in. For instance, Minnesota rates are projected to drop around 8% next year thanks in large part to their successful reinsurance program...but they would drop even more if not for the mandate being repealed, #ShortAssPlans flooding the market and so forth. In most states, 2019 premiums are going up at least a few points...but they would be dropping if not for the sabotage factors.

Finally, in many states the carriers overestimated the problem somewhat last year and are therefore making up for it this year by either lowering their rates or only raising them a nominal amount. Ironically, it's the ACA's 80/20 Medical Loss Ratio (MLR) rule itself which is primarily responsible for this development, since it limits carriers to a 20% gross margin on premiums.

All of the above makes it a bit tricky to explain to people.

I've therefore attempted to visually display the two-year impact of ACA sabotage for each state to make it easier to understand just how much more unsubsidized individual market enrollees are paying above and beyond the "normal" reasons (inflation/etc). The results are rather striking. 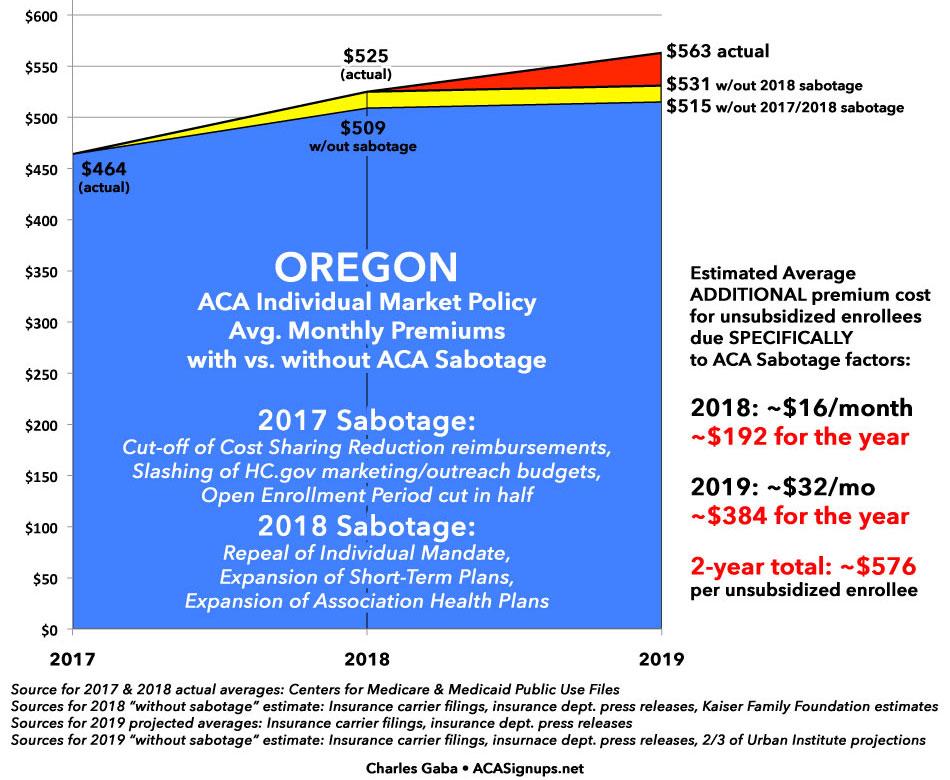 ...and here's Pennsylvania, which just released their "semi-approved" 2019 rates: 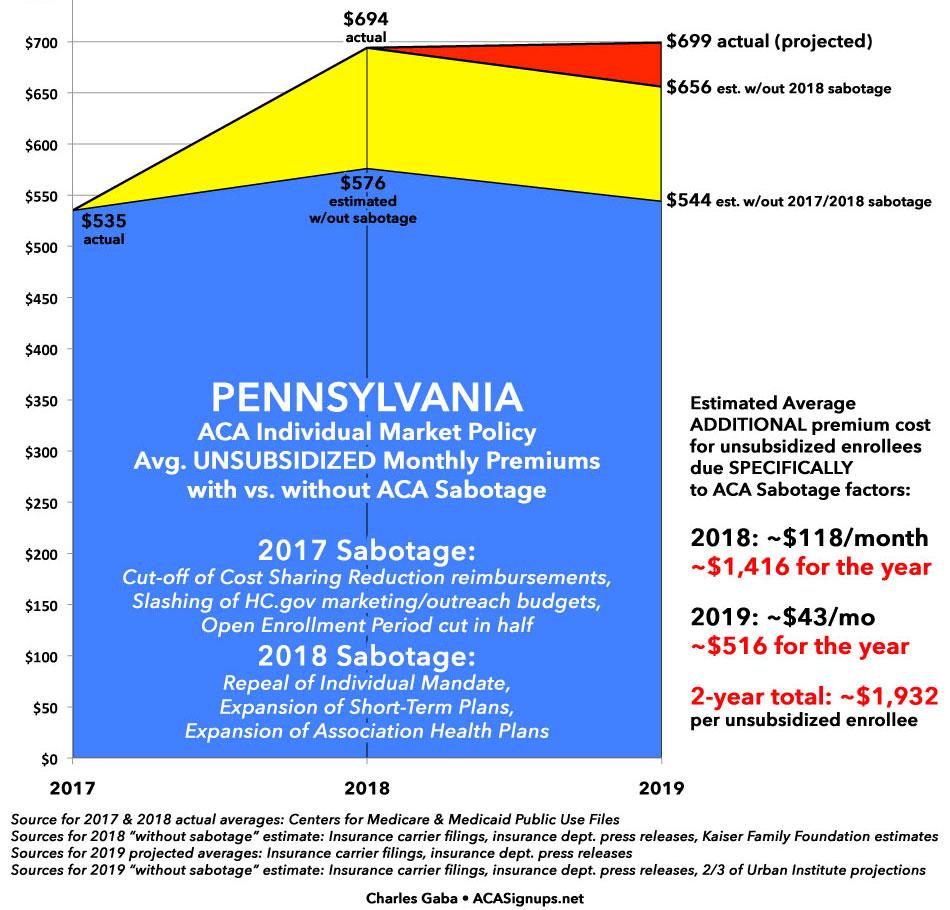 Check back on this page soon; I'll be adding one state per day until I've caught up with the publicly-released filings.