SACRAMENTO, Calif. — Covered California on Thursday announced a modest rate change for 2019 and said many enrollees will be able to mitigate the impact if they shop and switch to the lowest-cost plan in the same metal tier. The exchange also described how the recent federal decision to eliminate the penalty for the individual mandate will raise costs for the federal government and all consumers in the individual and employer-sponsored markets.

“Covered California continues to benefit millions of people in our state by giving them access to high-quality, affordable health coverage,” said Covered California Executive Director Peter V. Lee. “It is unfortunate when a rate change of nearly 9 percent is generally viewed as good news, when the rate change could — and should — have been much lower.”

Consumers in both Covered California and off-exchange in the individual market will see an overall average statewide rate increase of 8.7 percent to their gross premiums if they renew coverage in the same plan for 2019 (see Table 1).

The proposed rates, negotiated with Covered California and filed Thursday with regulators and subject to their final review, mean those who receive a subsidy to help purchase coverage will pay an average of 6 percent more if they renew in the same plan next year, which translates to an estimated monthly premium of $123 after tax credits. Subsidized consumers account for 88 percent of Covered California’s enrollment, and those subsidies rise along with rates to help offset any increases.

Consumers, both on and off the exchange, will continue to benefit from Covered California’s competitive marketplace, which allows them to shop for the best value and save money if they switch plans. The average rate change for consumers who shop and switch to the lowest-cost plan in the same metal tier is -0.7 percent, which means that many Californians can pay the same rate as they do now in 2018, or a little less, if they shop and switch.

“Covered California’s marketplace fosters competition that puts consumers in the driver’s seat and gives them the power to shop and save,” Lee said. “Health care is local, and the price of coverage varies by health plan and region, so consumers will be encouraged to shop when they renew this fall.” (See Table 2 for a complete list of rate changes by region.)

Covered California estimates the 3.5 percent increase added to the rates will mean Californians will be spending more than $400 million more on their health care coverage in 2019. While subsidized consumers will be protected from this increase, since the amount of financial help they receive will also increase, the federal government will end up paying an estimated $250 million more in higher tax credits. Unsubsidized consumers on- and off-exchange will bear the full brunt of the increase.

Interestingly, there's no mention of #ShortAssPlans anywhere in the press release. I'm assuming this is because bills to outlaw non-ACA compliant Short-Term, Limited Duration policies and Association Health Plans are expected to pass through the California state legislature, although neither has actually become law last I heard (it passed the state Senate but still has to pass the state Assembly).

“The cost of the penalty removal will manifest for unsubsidized consumers in higher rates. While subsidized people will not bear the full costs, taxpayers will,” Lee said. “The additional losers from this policy change will be those who decide to roll the dice, go without coverage, and end up with hundreds of thousands of dollars in medical bills.”

Lee said the elimination of the penalty for those who choose not to buy health insurance had a negative impact on rates for 2019. Carriers added between 2.5 and 6 percent to their rates, with an average of 3.5 percent, due to concerns that the removal of the penalty will lead to a less healthy and costlier consumer pool.

OK, so California is expecting a considerably lower impact of mandate repeal than most other states, probably because they've been actively taking steps to stabilize their market already. Even so, the average unsubsidized enrollee is paying $547/month this year, so that's still an extra $230 that each of them will have to pay next year purely due to the mandate being repealed.

Lee said some federal changes will affect more than just rates in 2019. The elimination of the penalty for going without health insurance will likely affect enrollment.

Covered California estimates that the elimination of the individual mandate penalty could reduce enrollment in California’s individual market by 262,000 consumers in 2019. Analysis conducted by PricewaterhouseCoopers found that the removal of the individual mandate penalty could also result in uncompensated care rising by $1,000 per newly uninsured person. If all uncompensated care costs — that are not covered elsewhere — were shifted to private insurance, the cost of employer-sponsored coverage could increase by between 2 and 4 percent, a cost that would most likely be shared between the employer and the employee.

Other factors influencing the rates include “medical trend” — or the general change in the cost and usage of medical services and products — which accounts for 7.5 percent of the rate change. In addition, the federal suspension of the health insurer tax for 2019 kept rates about 1.6 percent lower than they might have been.

“While there is a one-year reduction in rates due to the suspension of the insurer tax, the impact of removing the penalty for the individual mandate is permanent and is far larger,” Lee said. 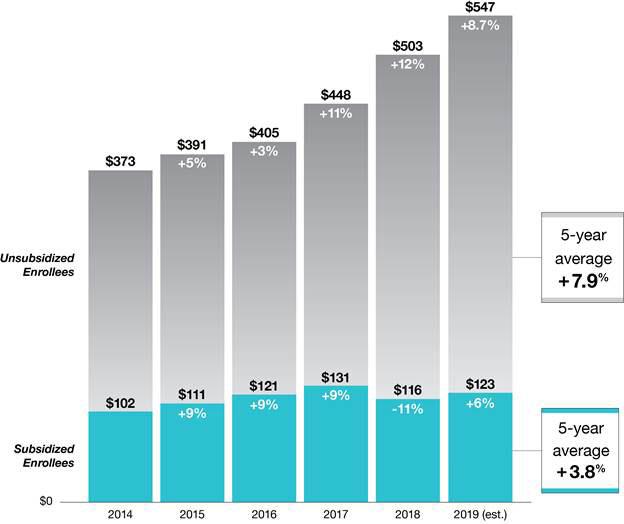 “In California we have 1 million unsubsidized consumers in the individual market, and while they will be protected from significant rate changes because of the positive effect of marketing and a competitive environment, we are worried that the rest of the nation is seeing millions of people at risk of being priced out of coverage,” Lee said.

“Covered California’s strong enrollment, low premiums and healthy consumers are the result of promoting competition that focuses on lowering costs,” Lee said. “We will continue to put consumers first by providing them with high-quality coverage that ensures they can get the right care at the right time.”

Consumers can find out what they will pay for their 2019 coverage starting during the renewal period in October, when they can visit Covered California’s website at www.CoveredCA.com and begin using the Shop and Compare Tool for 2019.

Consumers who do not have health insurance will be able to begin signing up for 2019 coverage on Oct. 15. Others with special qualifying life events, like losing their coverage or moving, can enroll year round. Medi-Cal enrollment is also year round. 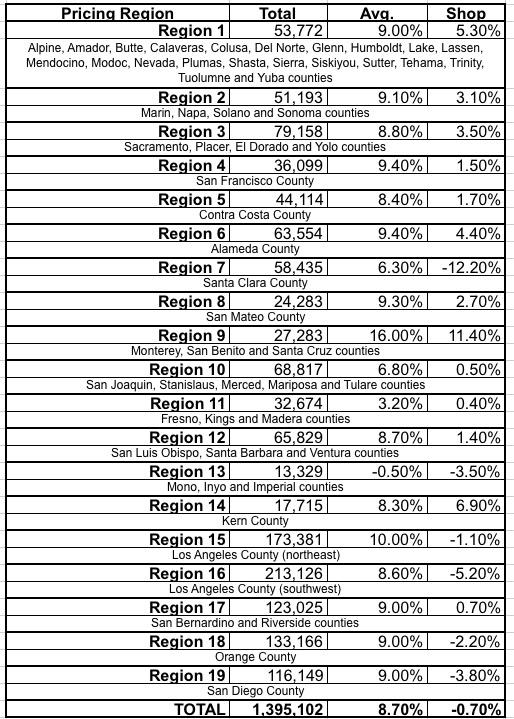