Filing a rate does not guarantee it will be approved for use on the Marketplace, nor does the filed rate guarantee to be the final rate. Therefore, the Department of Insurance is not able to ascertain the amount of any final rates at this time. The state has until September 25, 2018 to review and submit dispositions to U.S. Department of Health and Human Services. 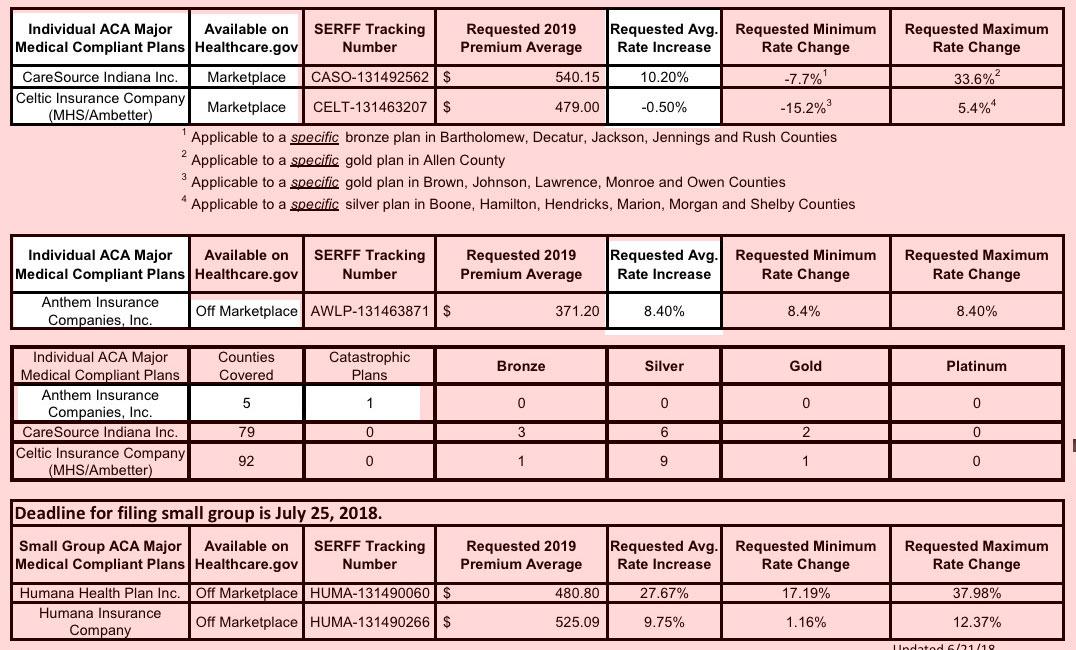 Since Anthem's market share is so nominal (they had literally 15 people enrolled last year, and next year they're only offering a single Catastrophic plan in a handful of counties), the only way to achieve a 5.1% average increase would be roughly a 50/50 breakout between CareSource and Celtic:

Unfortunately, while the document claims the actual filings are available at the SERFF database, I haven't found them yet, so I can't be sure of what portion of their rate changes are due to mandate repeal and/or #ShortAssPlans. Without them, I have to rely on the Urban Institute estimates, which projected that the combination of the Individual Mandate being repealed and the expansion of #ShortAssPlans next year is tacking a whopping 19.6 percentage points onto Indiana individual market rates. Using my 2/3 "playing it safe" rule, that suggests around a 13 point #ACASabotage factor.

In other words, using 2/3 of the Urban Institute estimate, it suggests that without mandate repeal & #ShortAssPlans, Indiana carriers would be asking for roughly a 7.9% drop in 2019 premiums.

I also don't see any indiciation as to whether or not Indiana carriers will be Silver Loading (or even Silver Switching) next year to deal with CSR load costs. I'll update this if/when I hunt down the actual rate filings.

The first footnote at the bottom is really interesting as well:

That suggests that without underlying medical trend/inflation, Celtic/CareSource would be dropping their 2019 rates by around 3-4%, not accounting for the sabotage issues.

UPDATE: Thanks to a tip from Twitter follower "nmbrmnstr", I've at least been able to dig up the actual SERFF filing for CareSource, although the Celtic and Anthem filings are still mysteriously not showing up yet.

As shown below, CareSource has around 76,000 people currently enrolled in ACA-compliant policies on & off the exchange. Since Indiana's total individual market is around 187,000 people, of which perhaps 30,000 are ACA-compliant, this suggests CareSource has roughly 48% of the total market...which is pretty close to the 52% I estimated above.

UPDATE: Hmmm...there seems to be a discrepancy about the total size of Indiana's individual market...the most likely error is my 30K grandfathered/transitional estimate. None of this really impacts anything else in this post, however.

The filing makes several references to the impact of the Individual Mandate being repealed...but has unfortunately redacted the actual percentage impact.

UPDATE: OK, I've also found the SERFF filing for Celtic and Anthem (see below); as expected, Celtic has around 66,000 covered lives. In an unexpected bit of news, however, Anthem somehow has over 37,000 people enrolled in their off-exchange-only policies. Huh.

Neither filing specifies the impact of mandate repeal, however.

This makes the actual average rate increases as follows:

Hmmm...that's a bit higher than the 5.1% stated in the official Indiana DOI document, but it's possible I'm missing something.

One more thing: According to CareSource, Indiana will foolishly NOT be among the states shifting to Silver Loading or Silver Switching in 2019...apparently the Indiana DOI is sticking to its guns and ordering carriers to continue Broad Loading CSR costs, even though this is the worst way to handle the cost since it hurts the most people for no good reason. 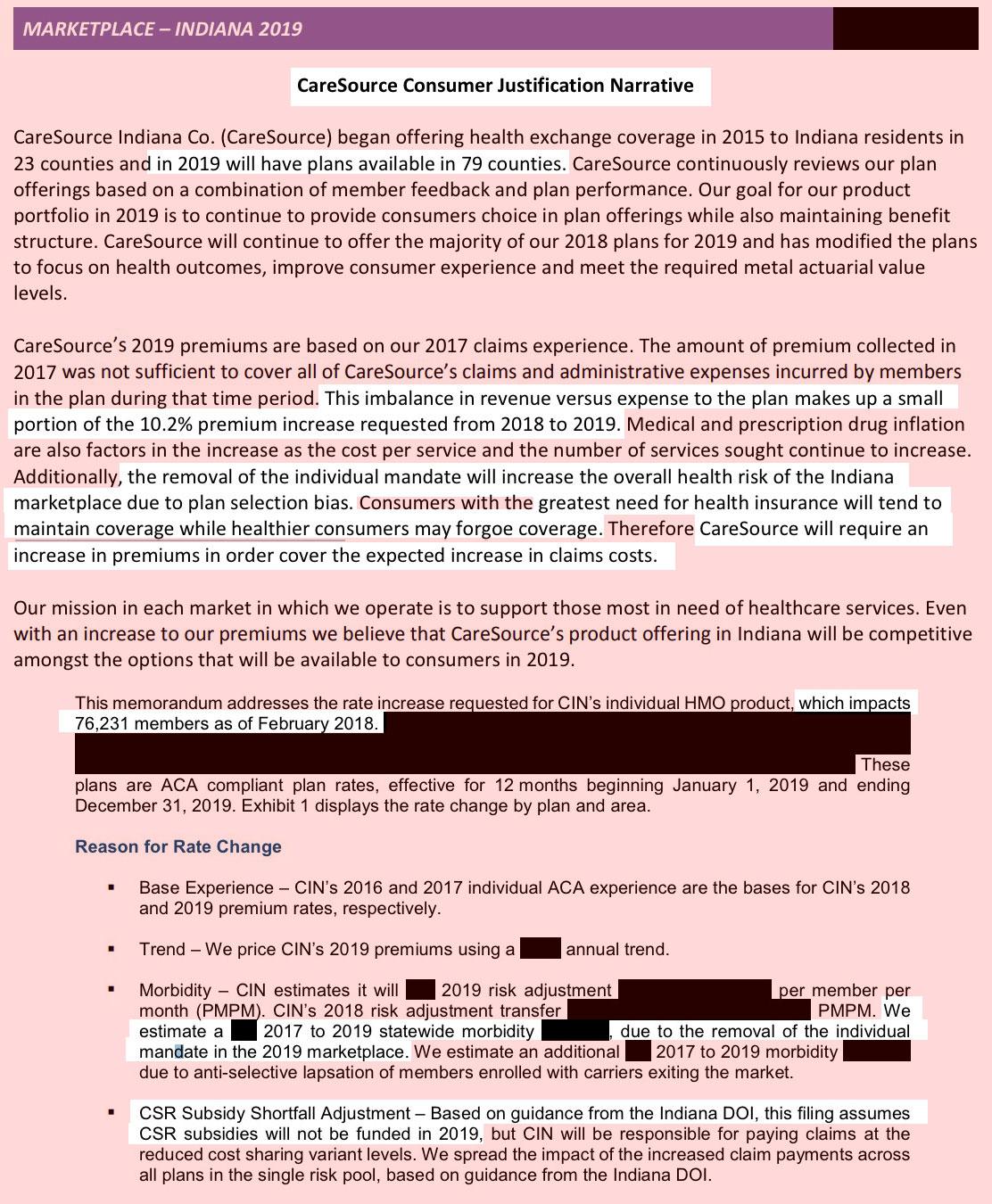