Well this is a nice surprise! Yesterday the Minnesota ACA exchange, MNsure, issued a press release a day ahead of the public posting of requested 2019 individual market insurance rate changes, advising people of the various ways they have to keep their premiums down via ACA tax credits, shopping around and so forth. I was immediately concerned that they might know something I didn't...perhaps they were expecting a batch of double-digit rate hikes as has happened in so many other states the past few years?

Well, today the Minnesota Commerce Dept. did release the preliminary 2019 rate requests, and I'm pleasantly surprised to report that for the second year in a row, Minnesota carriers are actually asking for rate decreases: 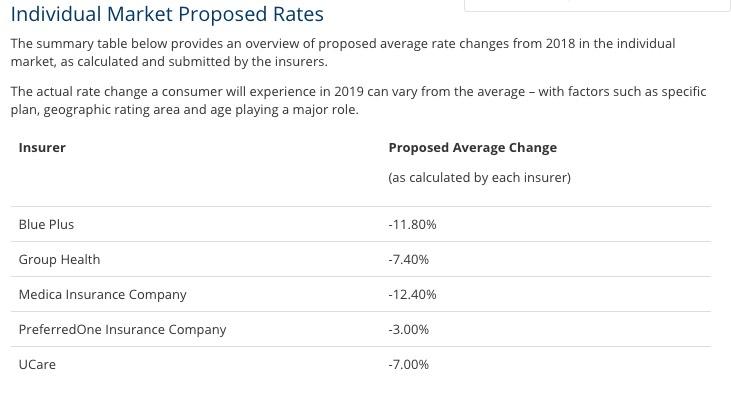 Unfortunately, neither the MN Commerce website nor the actual SERFF database seems to actually include the other critical information I need to put together a full analysis or a weighted average, including:

Without that data, the best I can do is to run an unweighted average by simply adding the numbers above up and dividing by five: an 8.32% price drop.

Of course, the actual weighted average is gonna be different, but again, I'd need the actual enrollment numbers for that. The closest I have for that is this March MNsure report... 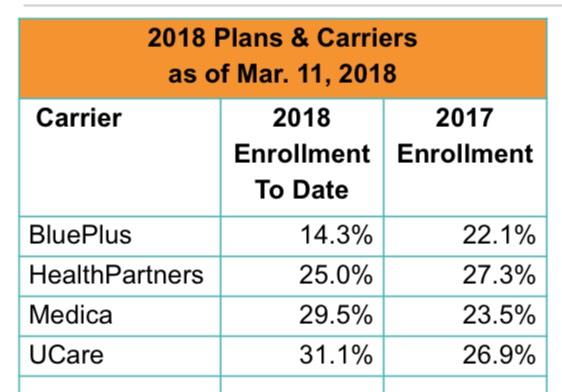 ...except there's still two problems with this: First, it only includes on-exchange enrollment for the carriers (leaving out off-exchange); and second, it doesn't include PreferredOne, which only offers plans off-exchange. This makes it effectively useless.

Still, even the weighted average has to fall somewhere between a 3% and 12.4% premium reduction. The midpoint is -7.7%., which is very close to the -8.3% unweighted average, so yeah, it's likely around -8% overall.

That just leaves the question of what 2019 premiums would be in Minnesota if the GOP hadn't repealed the individual mandate and if Donald Trump wasn't pushing hard on #ShortAssPlans. For that, in the absence of hard numbers from the carriers or the MN insurance dept., I have to turn to the Urban Institute estimate of 11.1%. As I've noted before, in the interest of caution, I'm knocking 1/3 off of that estimate, or around 7.4 points.

In other words, as far as I can tell, Minnesota carriers are asking for roughly an 8% average premium reduction next year...but they would be dropping rates by nearly twice that (15.4%) if not for the current round of sabotage efforts by Trump and the GOP.

As for why all five carriers are asking for a rate reduction in the first place (which is an extreme rarity), that should be very interesting. Yes, rates dropped about 5% overall last year thanks to their new reinsurance program, but I figured that would have more of a one-time impact...that is, it would cause rates to drop the first year, but would have a less dramatic effect after that. Instead, MN premiums are set to drop even more next year, and that's with the mandate repeal/#ShortAssPlans factors at play. Huh.

Again, some of the MN estimates above are a bit shaky. I'll make sure to update/revise this entry if/when I'm able to acquire additional hard info/data.

UPDATE: Well, here's some insight into why MN rates are dropping next year: At least one of the carriers significantly overshot their premium hike last year:

....More than 37,000 people were buying its individual market plans last year, which might imply a payout of roughly $800 each considering the estimated $30 million total. But McManus said actual rebates will depend upon a number of factors including how long a person was enrolled during 2017 and the amount of premium paid.