As usual, Louise Norris has the skinny:

Rate filings were due in New Mexico by June 10, 2018, for insurers that wish to offer individual market plans in 2019. Insurers that offer on-exchange coverage have been instructed by the New Mexico Office of the Superintendent of Insurance (NMOSI) to add the cost of cost-sharing reductions (CSR) only to on-exchange silver plans and the identical versions of those plans offered off-exchange (different silver plans offered only off-exchange will not have the cost of CSR added to their premiums).

Last fall, my colleagues (Norris, Dave Anderson, Andrew Sprung) and I were never quite sure what the CSR loading situation was in New Mexico; as far as we could tell, NM Health Connections and Christus were both Silver Loading while Molina went the full Silver Switcharoo route, and I don't think we ever had a clear answer on Blue Cross Blue Shield of NM. That confusion was compounded by Christus missing a deadline for refiling their 2018 rates, which meant that their policies were left off the ACA exchange for a couple of weeks, causing a change in which Silver policy was used as the "benchmark" from which tax credit subsidies were calculated.

For 2019, however, it appears that New Mexico is shifting to full #SilverSwitcharoo status across the board, which is a Good Thing®.

That's good news for New Mexico residents, especially those currently on Presbyterian policies who qualify for ACA tax credits; they should be able to shift to an on-exchange equivalent of the plan they're currently on and save big bucks.

As noted below, Molina has threatened a possible exit of the individual market in New Mexico due to the impending loss of their Medicaid managed care contract. I spoke with the NMOSI about this issue, but they didn’t have any details in terms of the current status of the situation (Molina has protested their loss in the Medicaid bidding process, but the state has rejected that protest). Molina has filed on- and off-exchange plans — with a proposed reduction in rates — for 2019. But that does not bind them to participate in the individual market next year, as they could opt to withdraw those filings later in the summer.

Insurers have filed the following proposed average rate changes, which are now being reviewed by the New Mexico Office of the Superintendent of Insurance: 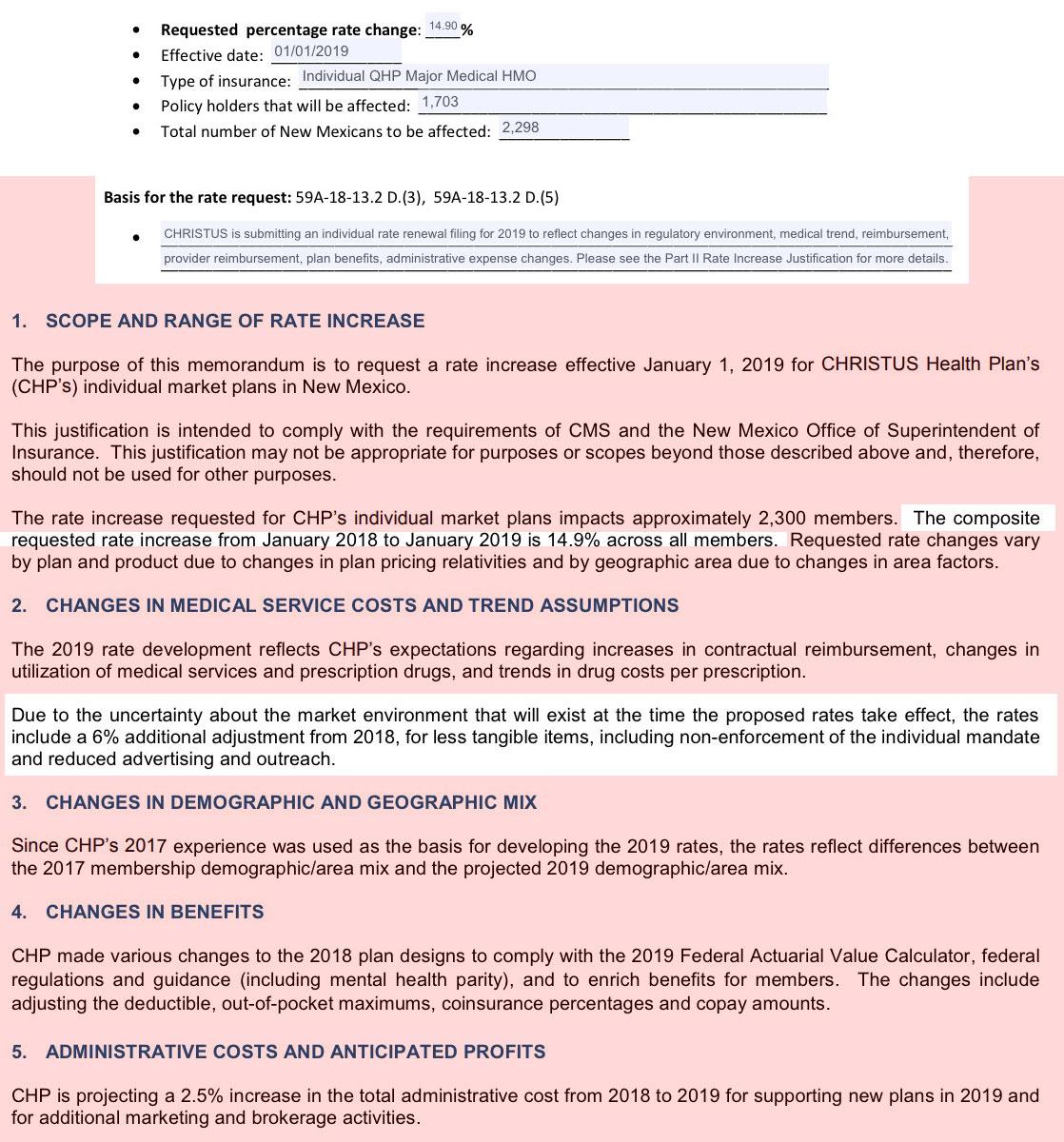 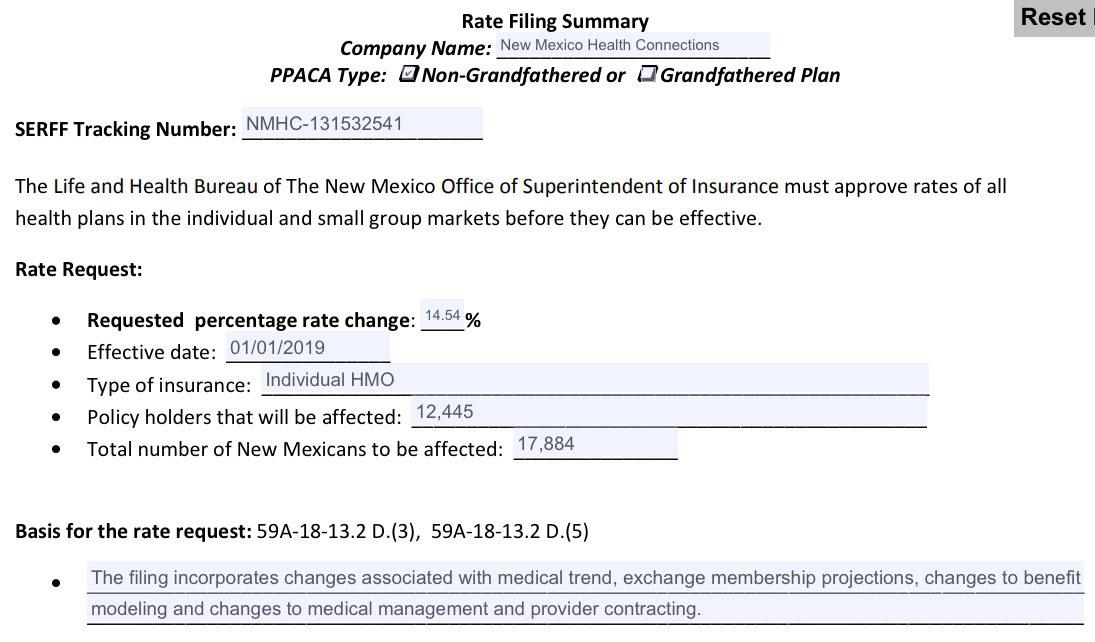 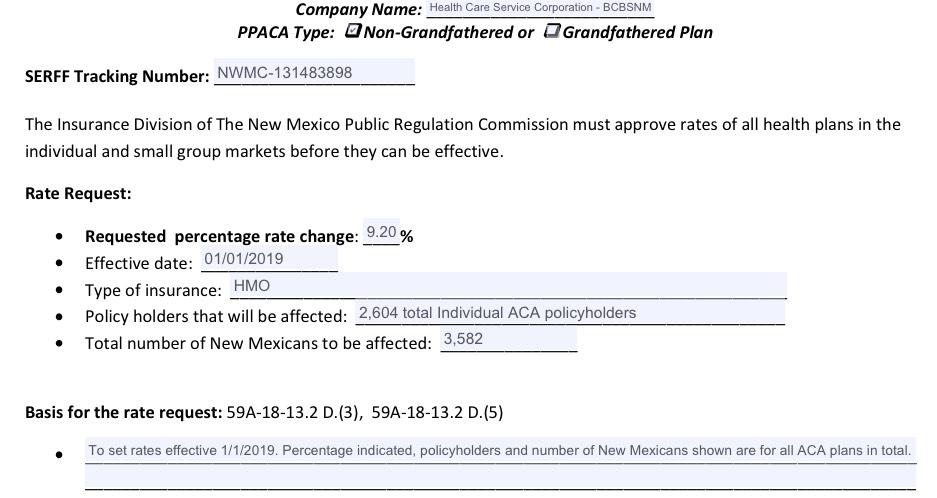 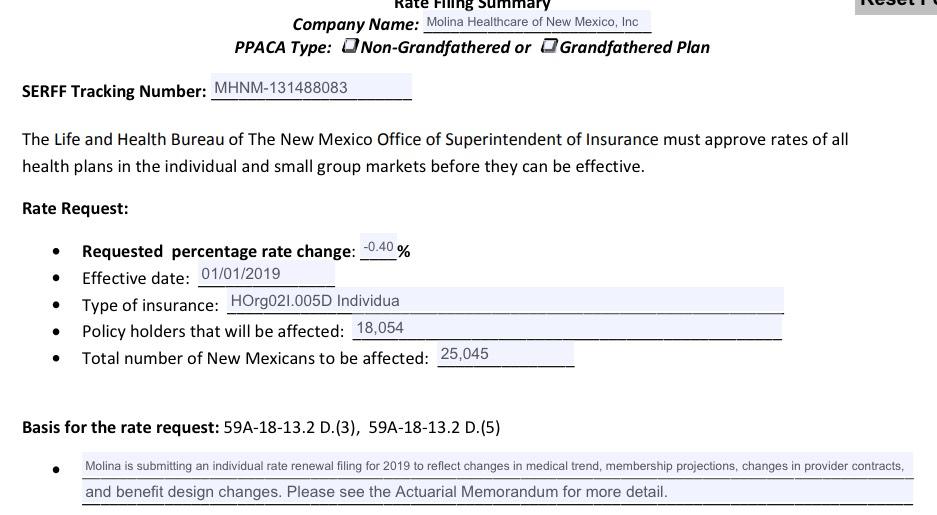 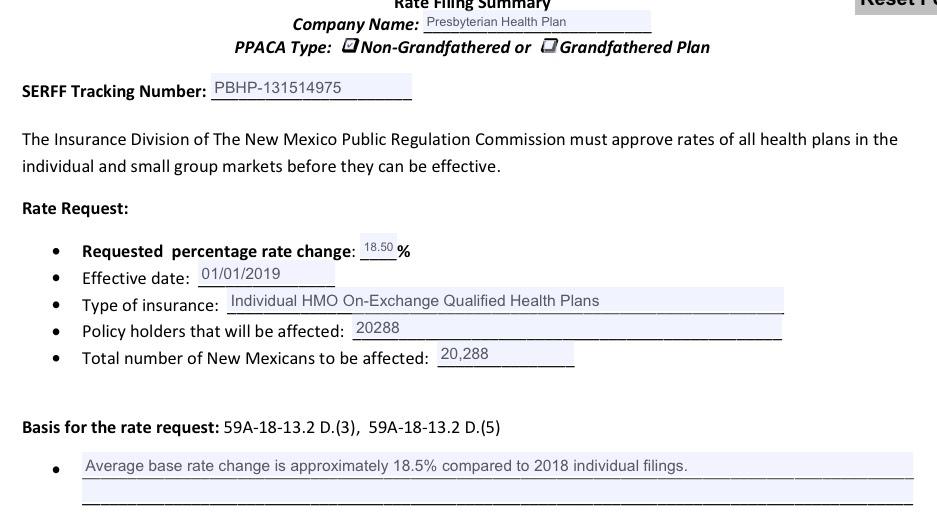