Here's the two big problems looming for 2018 (and potentially beyond that):

Cost Sharing Reduction Reimbursement Uncertainty: As I've written about endlessly (especially over the past few months), CSR reimbursements are legally owed to insurance carriers which have people earning 100-250% FPL enrolled in Silver plans. The amount varies widely by enrollee, plan, carrier and state, but it's expected to add up to something like $8 billion or so next year. CSR payments are embroiled in a federal lawsuit brought by the House Republican caucus itself, and could potentially be cut off at pretty much any time if Donald Trump instructs the Department of Justice to drop its appeal of the case.

The whole mess could be made to go away in about 5 minutes if Congressional Republicans were to pass a simple bill (less than 100 words) formally appropriating the payments, and Trump keeps publicly threatening to stop CSR payments this year (month after month) in an attempt to bully the Democrats into playing ball. The insurance carriers are required to cover the CSR costs for every enrollee who qualifies for them regardless of whether they're actually reimbursed for their expenses the following month or not. Since the carriers obviously have no intention of eating such a loss, they're responding in one of two ways: Some are dropping out of the individual market altogether, while most are simply jacking up their rates dramatically to cover the potential CSR reimbursement loss.

Individual Mandate Enforcement Uncertainty: The other deliberate and utterly unnecessary chunk of the rate increases being requested by the carriers is due to Donald Trump's Day One Executive Order, which basically instructed the entire executive branch (including the HHS Dept., IRS and so forth) to do everything possible to obstruct, block, slow or ignore ACA enforcement provisions. Most pointedly, HHS Secretary Tom Price was essentially told not to enforce the ACA's individual mandate penalty (and of course both the GOP House and Senate versions of the Trumpcare repeal bill would not only repeal the mandate penalty entirely, it would even make the repeal retroactive to the beginning of this year!

In fact, the GOP-controlled Congress is taking this one step further, by moving to officially prevent the IRS from even trying to enforce the mandate:

The mandate wasn't added to the ACA for the hell of it. It's the single most hated part of the law by everyone (including Democrats), but it serves an important function: To prevent people from gaming the system by not bothering to enroll for a policy for months or years at a time, and then suddenly signing up the moment they're diagnosed with some crazy-expensive ailment. If anything, the mandate penalty (currently around $695/person or 2.5% of your household income) is actually too small to be properly effective, since some people decide to just eat the $700 tax instead of signing up for a $2,000-$3,000 (or whatever) Bronze plan.

In any event, if the mandate isn't enforced at all, that means any effect it has on prodding people to sign up during Open Enrollment is kaput. That means people who are healthier are less likely to sign up, while those who are sicker are more likely to do so...which causes a more expensive risk pool, and thus higher rates. Again, this is a problem already occurring in many parts of the country under the ACA; part of the solution (not the largest part, but part) is to make the mandate penalty higher and more stringent, as unpopular as that is to say.

The point is that the carriers which are sticking around the individual market are also raising their rates somewhat to cover themselves from what they expect to be a worse risk pool next year due specifically to non-enforcement of the mandate tax.

So, just how much of an impact are these two 100% deliberate, completely unnecessary sabotage tactics by Donald Trump and Congressional Republicans causing?

That 15% is fuzzier because while the filings are usually pretty clear about the CSR issue, they're a lot less consistent about Mandate Enforcement. Some specifically call it out in raw numbers; some mention it in general but don't break it out specifically; and others don't mention it at all.

IN GENERAL, however, after poring over dozens of rate filings, explanatory letters and analysis by different resources, at the moment the breakout seems to be something like the following: 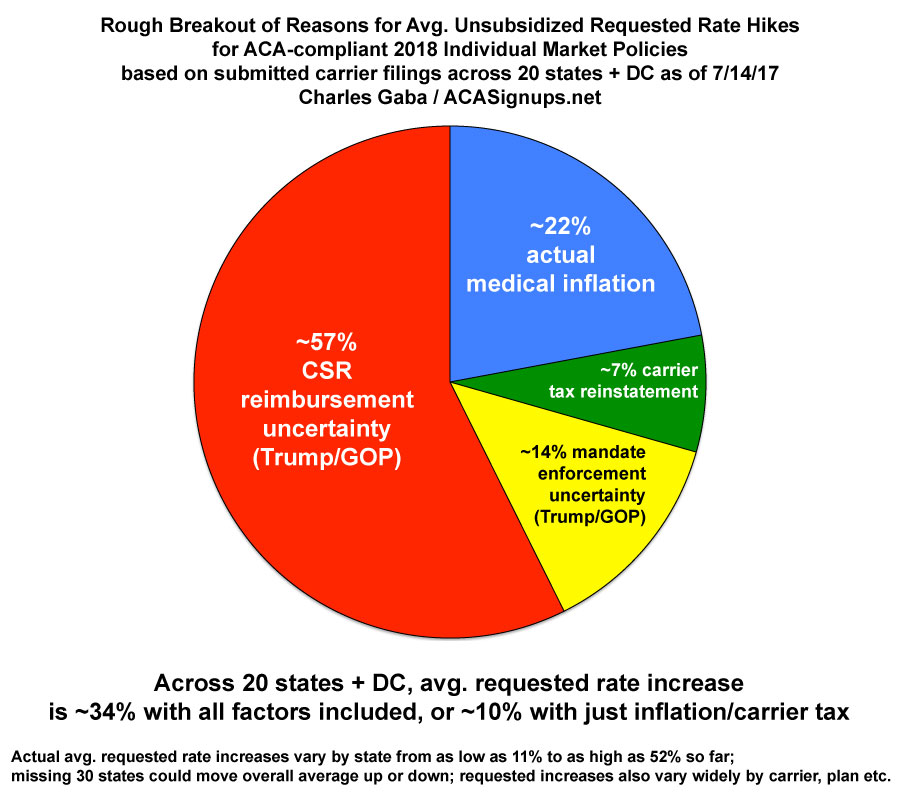 If they think the mandate will be enforced, many people will (grudgingly) go ahead and sign up for a policy for 2018. If they think it won't be enforced, some of those people won't sign up. Whether it's actually enforced next spring or not is almost irrelevant in some ways...because it'll be too late by that point; Open Enrollment will be long since closed.

So what does all of this have to do with the headline of this article?

Simple. Here's the latest rate hike requests from my home state of Michigan:

As you can see, statewide, Michigan is looking somewhat better than the other 19 states as a whole: 15.8% with a PARTIAL Trump Tax, 25.4% with the FULL Trump Tax.

If you look closer, you'll see that Blue Care Network, the HMO division of Blue Cross Blue Shield of Michigan, is looking a bit better yet: Only 8.8% for NO Trump Tax vs. 22.6% for the FULL Trump Tax. I say "NO" instead of "PARTIAL" because according to insurance guru Louise Norris...

That's about as specific as it gets. In BCN's case, the breakout is: 8.8% for Medical Inflation/Carrier Tax, 5% for Mandate Uncertainty and 8.8% for CSR Uncertainty. In other words, fully 13.8 points of Blue Care Network's requested rate hike is due SPECIFICALLY to deliberate Republican sabotage of the individual market. That's a full 61% of the total rate increase being asked for. There's no other way of stating this.

I should also note that if BCN's "5 points for mandate enforcement" is representative across the other carriers, that would drop the "NO TrumpTax" increase to around 12.6% instead of 15.8% (which would mean 50% sabotage effect overall), but that gets more speculative. Even as it stands, at least 38% of the overall increase statewide can be pinned specifically on Trump/GOP sabotage.

That brings me to my own situation.

For the past three years, my wife, son and I were enrolled in a BCBSMI Gold PPO plan via HealthCare.Gov. Due to our highly-variable income (we're both self-employed, so it jumps up and down a lot year to year), some years we receive a tax credit, other years we don't.

This year, however, the rates for the Gold PPO jumped up about 18% or so, so we downgraded to a Gold HMO instead....smaller network, but cheaper premiums. Just gotta be careful not to go out of network. As a result, our unsubsidized premiums run about $1,200/month for the three of us.

Of that, around 8.8% is justified by actual medical inflation and the carrier tax (yes, around $300 of my premiums would be going to pay for other people's tax credits...and ironically, potentially some of my own). However, the other 13.8 points of that increase...or just under $2,000 of it...would be due specifically to Donald Trump, Tom Price, Paul Ryan and Mitch McConnell being hell bent on destroying Obamacare at any cost.

Of course, I don't know for certain that we'll keep the same plan. For that matter, I have no idea whether BCN will even offer it next year; it's conceivable that the GOP will botch things up so badly that they decide not to sign the final 2018 carrier contract after all, and we'd either have to shop around or be screwed altogether.

But assuming they stick around and we keep the same plan, a full $2,000 will be taken out of our bank account because the GOP can't stand the thought of anything with Barack Obama's name on it to survive.