California: Suite of bills would check off a bunch of my wish-list items and more

Over the past few weeks, in the midst of the failed Republican-sponsored "ACA stabilization bill" known as Alexander-Collins (which laughably included "Bipartisan" in the title evne though it had changed dramatically from the actual bipartisan bills which Senators Patty Murray and Bill Nelson had worked with Lamar Alexander and Susan Collins on last fall), Democrats in both the House and Senate introduced real ACA stabilization/improvement bills of their own.

The official names of these bills are the "Undo Sabotage and Expand Affordability of Health Insurance Act of 2018" (USEAHIA) and the "Consumer Health Insurance Protection Act" (CHIPA) respectively, but for pretty obvious reasons I'm shortening each of them to simply "ACA 2.0".

Last week I whipped up a handy chart which pitted each version of ACA 2.0 against each other...and against my own ACA Wish List from a year ago, which I called "If I Ran the Zoo" (I threw in the Alexander-Collins bill as well at the time, but now that it's dead, that's pretty much moot).

Anyway, today, the amazing Louise Norris of healthinsurance.org gave me a heads up about what's going on in California...and the answer is, a lot.

After the proposed state-level Single Payer bill was put on ice last summer for various reasons (primarily serious funding source issues), it looks like the California state Senate and state Assembly have been quite busy, putting together a bevy of standalone ACA improvement bills. To my knowledge none of these have actually passed either chamber yet, but Norris has an excellent roundup of what each would do:

I'll be honest...I'm not sure this is a great idea. Don't get me wrong, I'd love to cut out the profit motive from insurance carriers altogether, but this might be pushing the point. Warren's proposal to set all three markets at 85% makes sense to me now that the carriers seem to have finally figured out how to make a profit on the individual market at all; going to 90% for Large Group might be a bridge too far. Or...perhaps not. I still don't know enough about gross vs. net profits, carrier overhead and so on to be sure about this one way or another. Then again, 85% across the board certainly would make it easier to explain how the MLR rule works to people since it'd be one less caveat to explain.

Of course, the larger problem with setting a minimum percent MLR rule is that it encourages the carriers to collude with providers (doctors/hospitals) to simply jack up the provider rate, so that the carrier receives 15-20% of a larger total dollar figure. This is where actions like the lawsuit just filed by CA Attorney General Xavier Becerra against Sutter Health could become a factor.

This basically amounts to removing the 400% FPL income cap, it'd just be funded by the state instead of the federal government.

This basically amounts to beefing up the existing APTC subsidy formula.

California is likely the only state in which a law like this would have any chance of passing (and as noted, they'd still have to receive a federal waiver approval). I find it hard to believe that federal dollars would ever be approved by the GOP for this, so the state would presumably have to pick up the full tab...and even then, there'd be the obvious concern among many undocumented adults about the Trump Administration having ICE use the enrollment database to hunt down and deport them, which is why the proposal was scrapped last year in the first place.

It would be awesome if this went through...but again, a federal waiver from Trump's HHS Dept. is required. Not confidence-building.

Now that's something different. The ACA metal level structure is based on the idea that Bronze plans--which only cover 60% of the typical enrollee's medical expenses and therefore have huge deductibles--are supposed to only be encouraged for people in certain situations. Low income enrollees are strongly encouraged to enroll in Silver plans, which include the additional CSR assistance to slash those deductibles down to size, taking them from the normal 70% Actuarial Value level for Silver up to as high as 94% AV. However, the whole premium/deductible/tax credit/CSR system is so confusing to most people that many low-income folks choose to enroll in Bronze plans anyway, being drawn to the dirt-cheap premiums even though Silver plans are a far better value for them overall. AB 3148 solves this problem by...simply denying the Bronze option to lower-income CSR folks altogether.

The higher CSR threshold itself, meanwhile, is similar to both the House and Senate bills.

In any event, I've updated my comparison chart to show how California's state-level bills would line up (if they all became law) against my own list, the House Dem bill and the Senate Dem bill. As you can see, there's quite a bit of overlap on several provisions, most notably on the APTC/CSR subsidy front, where all three would beef things up considerably, and on Trump's Short-Term Plan sabotage: 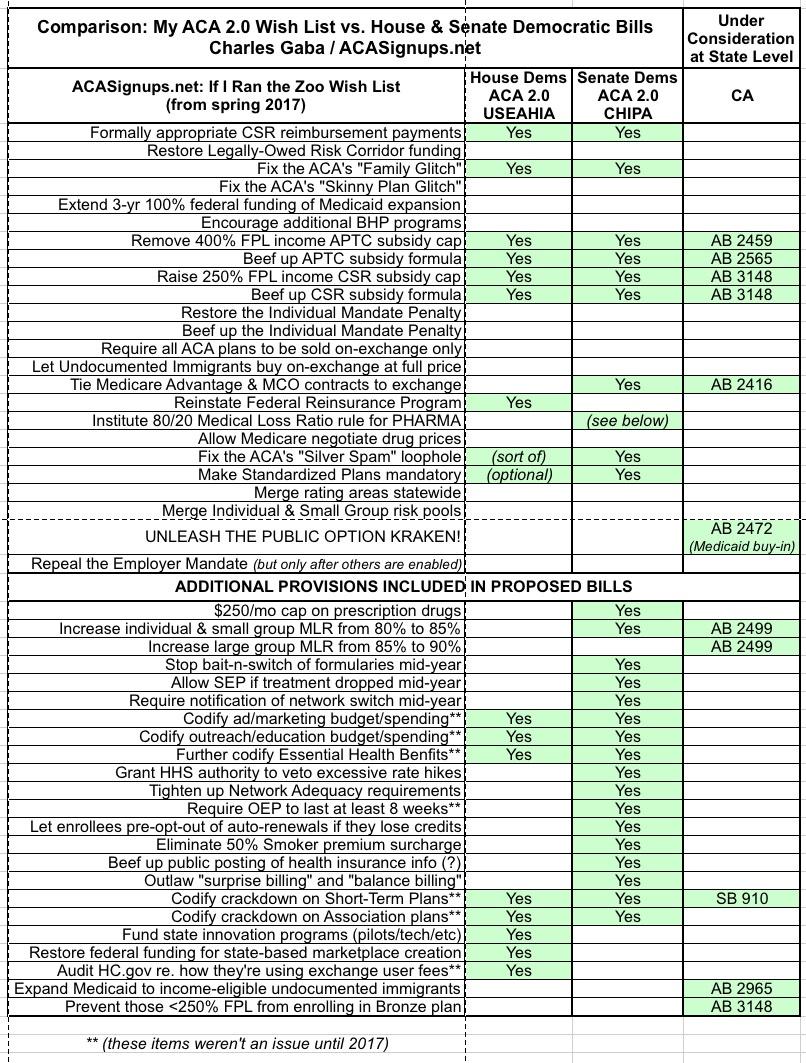 California
If I Ran the Zoo