It's important to note that while "Copper Plans" (basically ACA Catastrophic plans being made available to everyone) may sound similar to the #ShortAssPlans being touted by Trump and the GOP these days, they still include important protections that #ShortAssPlans don't:

I was in favor of A-M at the time, but something important happened around the same time: The carriers, regulators and exchanges came up with the clever Silver Load/Silver Switch workaround, which mitigated the CSR funding cut-off for most enrollees and even enhanced tax credits for a large chunk of those who qualify for them. While appropriating CSR funding still has some upside for many people, there's also now a downside to doing so as well, making it far less urgent from a policy perspective.

Later on, Dem. Senator Bill Nelson and GOP Senator Susan Collins (the other GOP Senator interested in real healthcare policy improvements) put together the Collins-Nelson bill. This one was much simpler: It would provide several billion dollars for a federal reinsurance program to help cut down premiums on the individual market.

That's it. That's really all it would do: Repair some of the damage caused by the individual mandate being repealed (which, I should note, only happened in the first place because of Republican Senators including...wait for it...Susan Collins and Lamar Alexander) by patching the hole with some money.

Now, don't get me wrong; while I was opposed to the mandate being repealed, now that it's done and it's a moot point, I'm all for providing reinsurance funding. The only problem is that the original amount ($4.5 billion over 2 years) wasn't nearly enough to patch the hole.

Susan Collins seems to have realized this as well, because she later came back with a revised version of the Collins-Nelson bill...basically the same, except with the dollar amount more than doubled, to $10 billion over 2 years.

As I reported at the time, even that wouldn't be enough:

Aviva Aron-Dine of the Center on Budget and Policy Priorities seem to think that $10 billion/year in permanent funding is what would be necessary to do the trick:

Well, sure enough, the individual mandate was indeed repealed, and there's not much which can be done if the carriers decide to bail altogether.

However, it seems that the "$10B/year" figure has finally settled into Collins' head. According to a new study by Oliver Wyman Health:

In our December 9, 2017 article, we analyzed the effects of a proposal the US Senate was considering to fund cost-sharing reduction (CSR) payments and appropriate $5 billion in 2019 and 2020 for states to establish reinsurance programs to stabilize their individual insurance markets. We discussed how pass-through savings could provide reinsurance coverage equal to roughly $15 billion in protection for high-cost claimants, and how this protection, combined with CSR funding, would bring more people into the individual market and lower premiums by over 20 percent.

OK, so besides the dollar figure doubling again, it seems that they're bumping out both CSRs and reinsurance for three years, up from two. Good to hear!

In other words, the proposed stabilization solution has effectively gone from this... 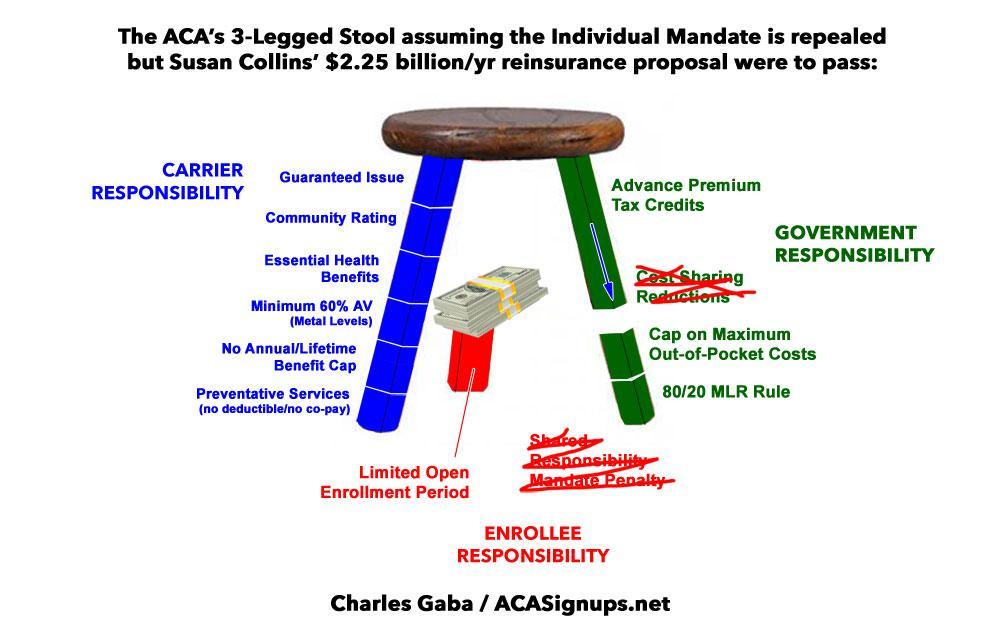 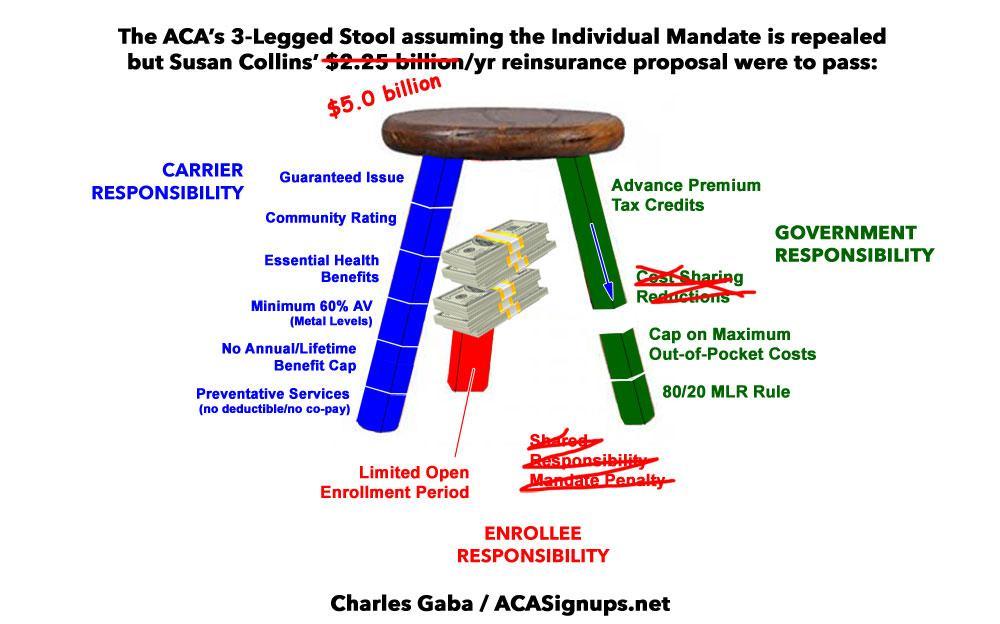 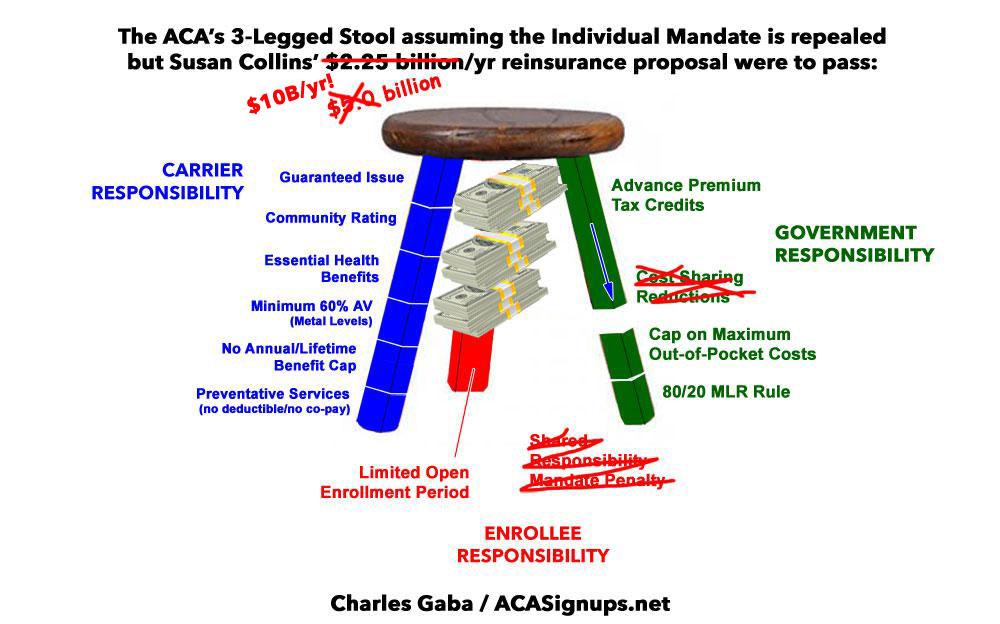 ...in order to effectively fill the gap which, ironically, the GOP themselves created in the first place.

Our healthcare microsimulation model, used to understand this package’s likely effects on the market, assumed states would use federal pass-through savings under Section 1332 of the Affordable Care Act (ACA) to supplement and leverage the $10 billion the considered legislation would authorize and appropriate each year. Pass-through savings result from the fact that the premium subsidies available under the ACA cover the difference between the second lowest cost silver plan available in a rating area and a fixed percentage of a household’s income, varying only by federal poverty level (FPL). Lower premiums result directly in lower premium subsidies, and under a Section 1332 waiver, these savings from lower premiums may be used to provide additional reinsurance.

So, how much does Oliver Wyman think this would help? Quite a bit:

...Therefore, we estimate, under the assumptions described above, that an additional 3.2 million people will be covered in the non-group market, and the proposal would result in premiums that are at least 40 percent lower than they would have been without the proposal in place, across all metal levels. In those states that are not able to obtain a 1332 waiver and take advantage of pass-through savings for 2019, we estimate that premium would decline by more than 20 percent across all metal levels. Those estimates include an average 10 percent reduction due to the funding of CSRs, with the remaining reduction coming from the reinsurance program.

Again, it's important to clarify that the "40% lower" figure is not relative to 2018 premiums, but would be relative to how much premiums would otherwise be expected to be in 2019-2021.

This study released by Covered California last week projects that mandate repeal alone is expected to cause rates to increase by around 11%, 6.3% and 6.3% respectively over the next three years. 40% below that would be more like 27% lower, 17% lower and 5% lower than 2018 rates respectively. Still a dramatic improvement, of course, but just important to keep that in mind.

In addition, it's important to note that while funding CSRs would lower unsubsidized premiums, this would also completely reverse the enhanced subsidies received by several million people, effectively raising their net premiums somewhat. It's possible that the reinsurance funding would cancel this out for them as well, however; I'm not quite sure how that would work out.

I want to be clear about this: I fully support Collins-Nelson, and while I’m still generally opposed to Alexander-Murray nowadays, I could probably live with it if it was part of the deal. I just find it amusing that it took a massive actuarial study to come to the conclusion that “throwing another $10 billion in subsidies at a $100 billion industry will lower prices!”

However, there is one tiny problem with the "$10 billion/year will clean up the mess!" solution, though: It would only clean up the mess made by Trump and the GOP last year; it wouldn't do anything to clean up the additional mess they're spewing this year:

As a note, our modeling reflects elimination of the mandate penalty, but does not consider the proposed regulation’s likely effects on association health plans or on short-term, limited duration coverage.

Yep, that same CoveredCA study projects that the other sabotage efforts by Trump this year (#ShortAssPlans) will jack up rates another ~4-5% or so over the next few years as well. Maybe Collins will revise her proposal a fourth time to tack on another few billion? Fine with me...