Update x2: OK, color me a bit sheepish; apparently Greg Dworkin mentioned the ACA site on the Kagro in the Morning show, which I didn't happen to listen to today. Thanks!!

Anyway, I'm happy to report that today's announcement of 365,000 private enrollments through November 30 is NOT the most up-to-date tally, and I'm very proud to report that the ACASignups numbers are remarkably close to what the official numbers ended up being.

You see, while the HHS report is no doubt accurate, it doesn't include a few important things:

--Over 112,000 people enrolled in private plans on the Federal exchange alone in just the first week of December.

--Several state-run exchanges, including New York, have released updated numbers since 11/30; NY, in fact, has actually added over 24,000 to it's tally in December already.

--There's also 43,000 people in Washington State who may or may not belong on their official enrollment number; it depends on how you read the article linked to on the spreadsheet.

In addition, the Medicaid numbers have numerous holes in them, because of the "bulk automatic enrollments" in Arkansas, California and other states which aren't included in the report since these technically aren't being added "via the exchanges" but simply automatically enrolled by the state government itself.

As a result, the current tally as of today stands at:

For comparison, here's what the chart looked like just a couple of days ago, BEFORE today's HHS report was released for 10/1 - 11/30: 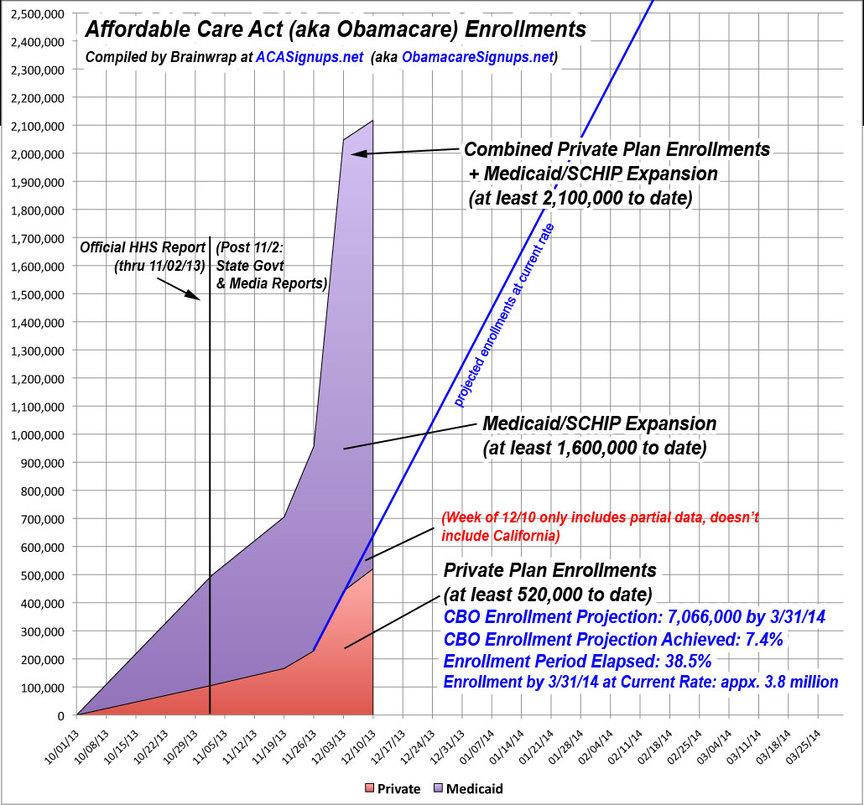 ...and here's what it looks like AFTER the report. Not much difference on the private enrollment side (which I'm proud of), but the Medicaid/SCHIP difference is noticeable: 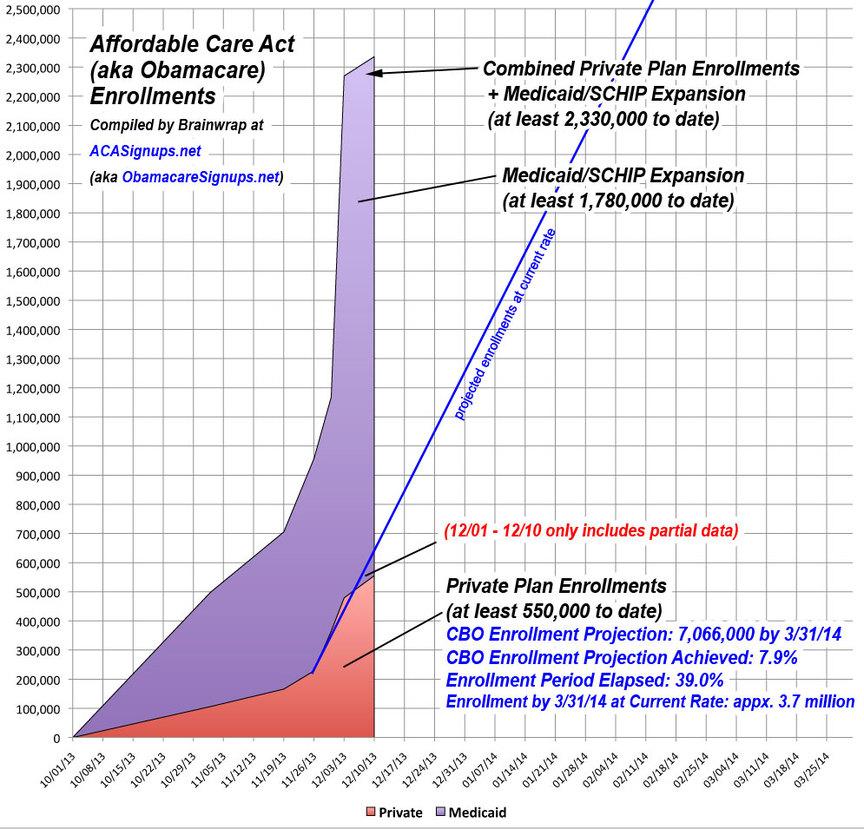 The biggest change I've made is on the spreadsheet itself (aside from adding a new "HHS Report" column and updating the numbers) is to separate out all of the "bulk enrollee" Medicaid numbers the way that I had Califonria, DC and Minnesota already; so, Arkansas, Oregon etc. now all have orange cells for those numbers, since they aren't included in the official report.

The impact on the actual total numbers and graph is actually minimal; basically, the 12/3 plot point is a bit higher, making the slope to the 12/10 plot point slightly less steep by comparison, but overall it's pretty close.

There's also a couple of less-extreme examples of the New York situation, where the Medicaid number actually dropped significantly from one week to the next; in fact, according to the HHS report, the official NY Medicaid number dropped twice, from 53K on 11/30 to 41K on 12/2 to just 31K on 12/9…except that the private enrollment number went up correspondingly, so it sounds like some reclassifications or clerical errors which are hopefully straightened out now.

UPDATE: I figured this was understood, but just in case it isn't, you can review a DETAILED, STATE-BY-STATE breakdown of both the private and Medicaid/SCHIP numbers by visiting the spreadsheet itself at http://acasignups.net.

For instance, check out Connecticut--they're currently AHEAD of their projected enrollment figure for the first 6 month period, at almost 42% with 39% of the time period elapsed.

New York is also kicking ass, at around 32% so far. Not bad!