In addition, there have been some other cool updates:

--THANK YOU to ybruti, who called my attention to this article from the Washington Post last summer, which noted that a half-million Americans were already quietly moved onto Medicaid specifically thanks to the ACA long before the October 1st exchanges opened. The only specific numbers given are for DC (30K) and Minnesota (41K); California is mentioned as well, but that number is sort of mixed in with the other 600K LIHP number that's already accounted for on the spreadsheet.

--Between the 56K 12/01-03 news and new numbers out of Vermont, Washington State and Minnesota, the total number of private enrollments has shattered through 400K and now stands at a minimum of 426,000 (and California, along with several other states, haven't reported full November figures yet)!

--The Medicaid/SCHIP expansion tally now stands at more than 1.5 million...

...meaning that we're very close to breaking through the 2 million total line! 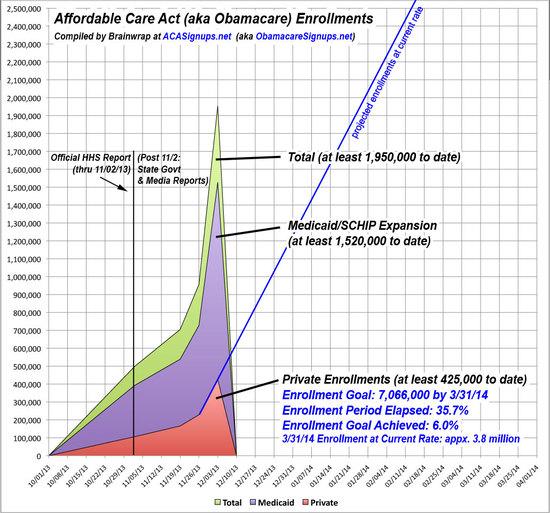