UPDATE: (sigh) OK, it looks like the final number for the District of Columbia was slightly too low; I've received official notice from the DC exchange that it was actually 22,584, 115 enrollments higher than the NASHP report pegged it at. The Graph and spreadsheet below have both been updated...

This morning Covered California issued their final 2018 ACA Open Enrollment numbers. I was a bit disappointed to discover that instead of beating out last year slightly, they ended up coming about 2.3% short year over year...but there's a very good reason for that: Like Maryland, California not only utilized the full "Silver Switcharoo" strategy with individual market premiums, they actively encouraged current UNSUBSIDIZED on-exchange Silver enrollees to switch to off-exchange Silver plans instead.

This is a difficult thing to explain and measure, but the bottom line is that several tens of thousands of previously on-exchange Silver enrollees moved from on-exchange to off-exchange plans. If these folks hadn't done so at the express urging of Covered California (as well as the exchanges in Maryland and Vermont, for that matter), most of them would be "counted" as exchange-based enrollees instead.

In any event, between the Covered CA press release and this handy summary from the National Academy of State Health Policy, I've been able to not only plug in California's final numbers but also the final number for the District of Columbia exchange as well (spoiler: it didn't go up much since it's such a tiny exchange to begin with). They also had some very slight corrections to the numbers I had down for Maryland and Vermont (just a few hundred total).

As a result, the following should be the final, official OE5 QHP selection totals when CMS releases the big ASPE report in a few weeks. Note that there may still be some slight variances between the numbers presented here and the "official" ASPE report; there's usually a minor clerical error or two which has to be cleaned up for one reason or another, often due to differences in what the "thru" date of the data included is. 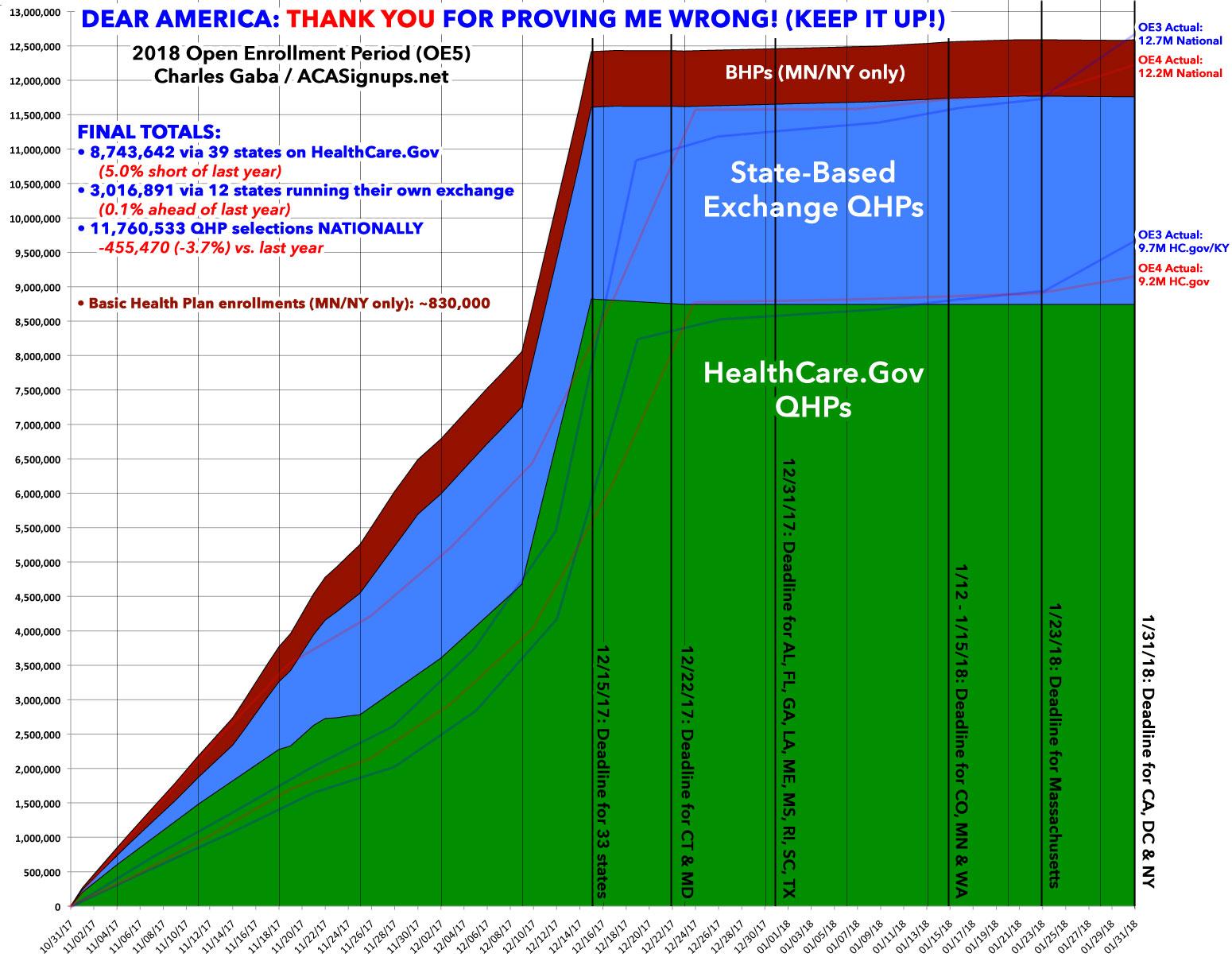 As I've been noting for a couple of weeks now, outreach matters!

In the end, 16 states outperformed last year in raw numbers...of which 11 of them were either full or partial state-based exchanges. That means that unlike the federal exchange, which slashed their enrollment/outreach budget to the bone, these states had their own branding, marketing campaigns/budgets and so forth.

OK, so what about the four state-based exchanges which didn't beat out last year's totals?

Even in doing so, both CA and MD still came within ~2.5% of last year's totals. Shift around 5,000 in Maryland and 40,000 in California from off-exchange back to on-exchange and voila, they'd both have nudged over the 100% mark.

Covered California's Peter Lee also made a point of stressing that once you're 5 years into the program, it's not so much about total enrollment growth (which was bound to plateau at some point or another without significant improvements to the law) as it is the stability and health of the risk pool. To that end, he pointed out that the 3% increase in new enrollees in California this year is more important than the 4% drop in renewing enrollees...especially since so many of those who "dropped" simply shifted to the off-exchange market, which is still part of the same risk pool.

It'll take some amount of digging through the final demographic data before healthcare wonks are able to figure out exactly how much of a factor "full silver switching" made this year nationally, but there's a few key states where the insurance departments and/or exchanges made a conscious effort to nudge unsubsidized Silver enrollees to do so. Besides California, Maryland and Vermont, I'd imagine Florida and Pennsylvania did so (via their insurance departments only, since neither one runs their own exchange).

At the opposite end of the spectrum, as I've discussed before, Louisiana's "poor" performance year over year appears to be partly due to a leftover chunk of Medicaid expansion enrollees still siphoning off people who would otherwise be enrolled in exchange policies (I had previously thought that was limited to 2017, but it appears perhaps 2/3 of the 33K drop this year was due to folks shifting over to Medicaid as well).

In the meantime, here's the state-by-state breakout, sorted by how each one performed relative to last year: 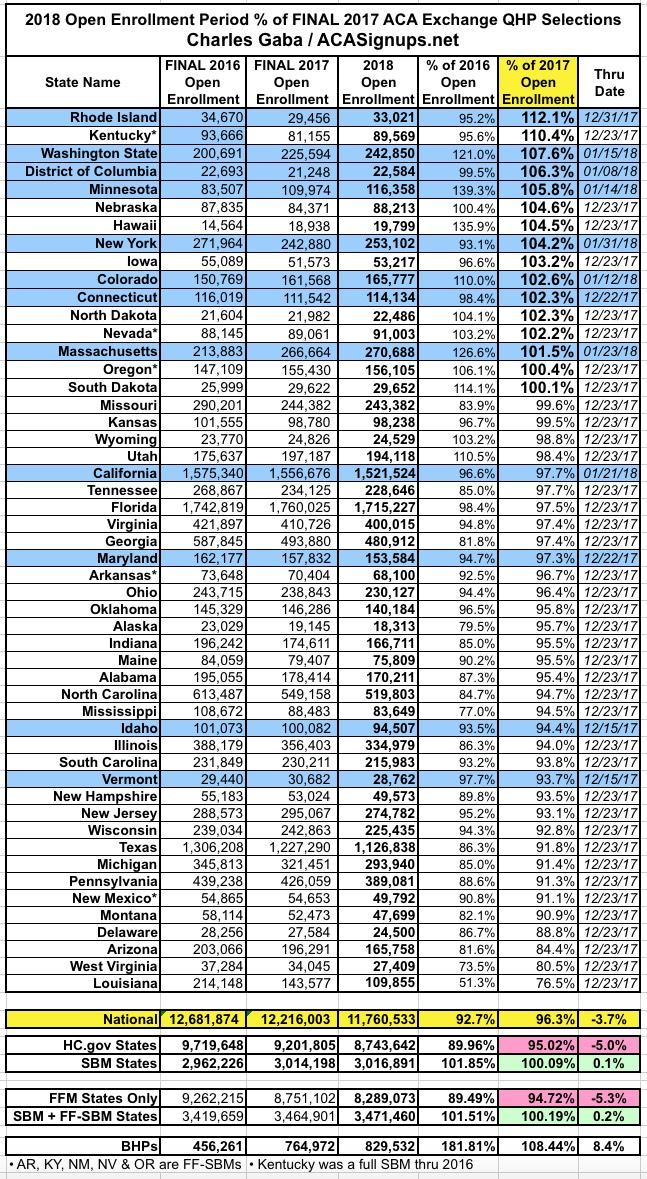 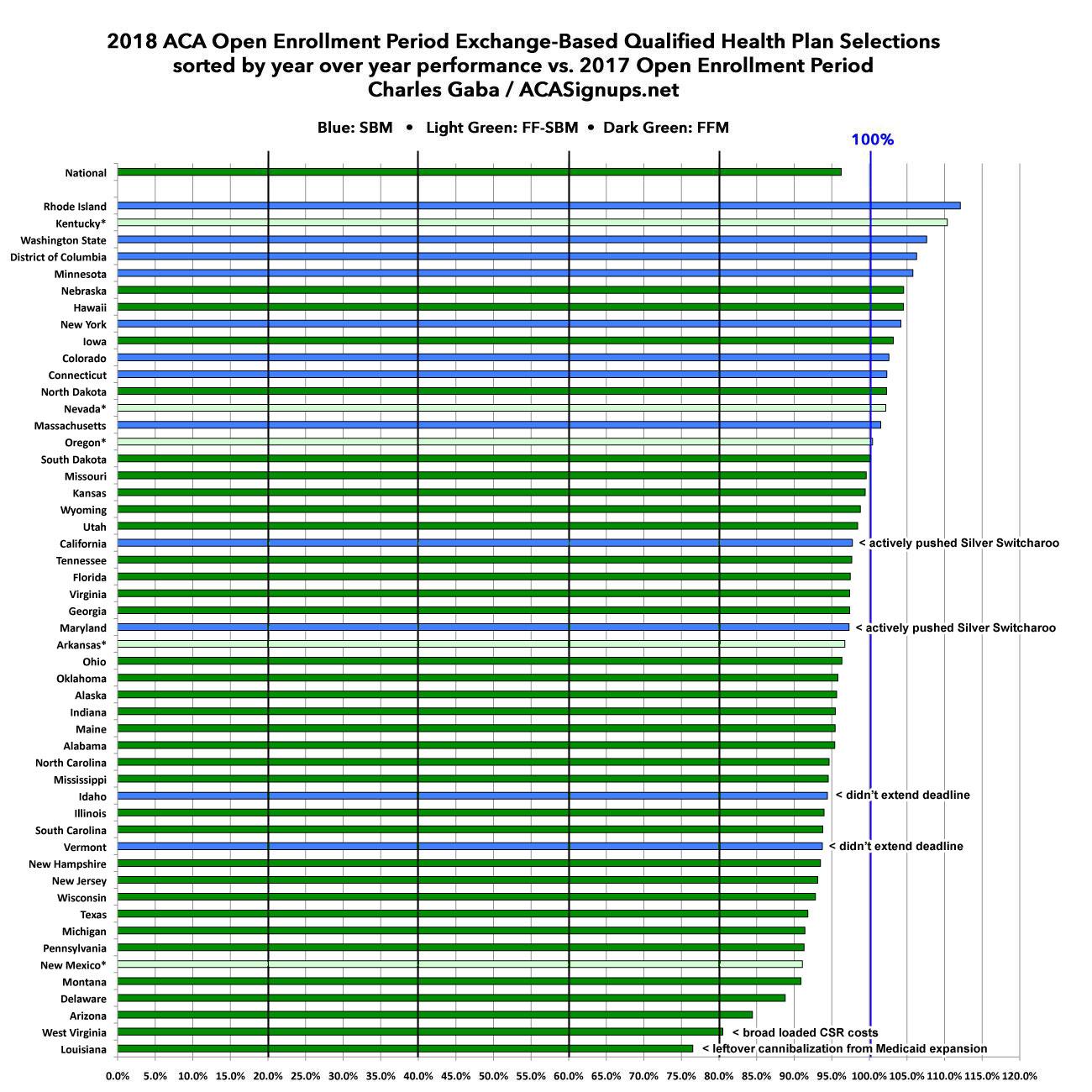