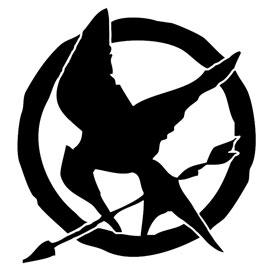 Finally, in late December, the GOP-controlled Congress agreed to tack on just six months worth of funding for CHIP, supposedly through the end of March, 2018:

Congress is likely to depart Washington this week approving just enough money for children’s health insurance through March and leaving families and governors wondering what's next.

Only days after clearing a massive tax reform bill along party lines, Republicans are still trying to figure out how to keep the government open past Friday, with hopes of including funding for the Children’s Health Insurance Program, which covers roughly 9 million low- and middle-income kids. So far, Republican and Democratic sources say they don’t expect to be able to attach more than six months of CHIP funding, with three of those months retroactive to when Congress let funding lapse, on Sept. 30.

States would welcome the patch but warn that they still could be forced to shut down their CHIP programs or freeze enrollment in the near future without a more permanent source of dollars.

Republican and Democratic lawmakers have pledged to renew money for the popular bipartisan program. But CHIP has been caught up in partisan squabbling over how to pay for it, and the issue was pushed to the back burner as Republicans tried to repeal Obamacare and worked on tax reform.

Congressional leaders have used CHIP funding as a bargaining ploy to gather votes, by attaching it to more controversial measures.

The thing is, the GOP could have funded CHIP for another 2 years...or 5 years, or 10 at any point over the past year during which they held total control of the House, the Senate and the White House.

People were screaming at them to extend funding of the program for months before it ran out last September, and every day since then, only to have it fall on deaf ears. It never made any sense...GOP Sen. Orrin Hatch himself went on and on in early December, huffing and puffing about how vitally important CHIP was and how he absolutely, positively would make certain that it was funded no matter what...without ever once explaining why the GOP had allowed it to expire a couple months earlier.

Hell, Louisiana GOP Senator Bill Cassidy even outright lied to Jimmy Kimmel's face about how many children were covered by CHIP back in May of last year, claiming that "most children" were covered by CHIP as opposed to Medicaid (in fact, only 19% of the 45 million children he was referring to, or around 9 million, are enrolled in the CHIP program). Sickeningly, Cassidy's exact quote was:

KIMMEL: "Will the Senate make sure that the millions of children that count on Medicaid don't lose access to medical care because this House bill would cut, they say $880 billion, mostly to benefit wealthy Americans?"

CASSIDY: "Let me answer your question first technically...then more broadly...and then more broadly yet. Most children are covered under the CHIP program, and so they are gonna get the coverage they need. That's almost independent from Medicaid. Under Medicaid itself, though, clearly, if we're gonna fulfill President Trump's sort of "Contract with the American People", that people would maintain their coverage, Medicaid will be a part of that."

At the time, of course, Cassidy was trying to slash Medicaid for millions of children, so he tried to minimize the impact by falsely claiming that "most" of them were enrolled in CHIP, which supposedly would remain funded regardless. Of course, his attempts to slash Medicaid failed, so the GOP decided to move to Plan B, which included taking the 9 million children enrolled in CHIP hostage instead.

Back in September, the general thinking was that Republicans were ignoring CHIP funding reauthorization in order to focus on their other terrible legislation--first, the ill-conceived Graham-Cassidy bill (which, thankfully, was shot down in the end), and then later, the #TrumpTaxScam (which, sadly, was not shot down).

The truth has since become clear, and it's even worse: Mitch McConnell & Paul Ryan weren't simply ignoring funding CHIP last fall, they were deliberately taking it hostage in an attempt to force Democrats into a Sophie's Choice-type situation last week, pitting healthcare coverage for 9 million children against the fate of 700,000 Dreamers brought to the U.S. as children.

In case anyone had any doubts about this, McConnell himself made this crystal clear the day of the big Continuing Resolution vote:

#Senate Democrats have a choice to make. This should be a no-brainer... pic.twitter.com/zdUFXxclZ9 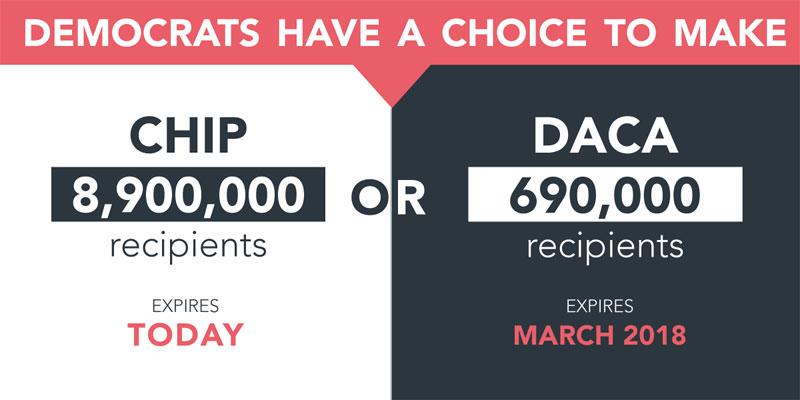 Yes, that's right: Congressional Republicans took both the 8.9 million children enrolled in CHIP and the 690,000 DACA enrollees hostage, then came right out and told Democrats that they have to choose between them.

Congressional Democrats have rightly chosen not to negotiate with kidnappers (I considered using  the term "terrorists" since they're holding hostages in an attempt to coerce a political end, but decided that McConnell/Ryan haven't actually threatened violence against the children so far, so don't technically qualify...yet).

FInally, in case anyone still thinks that Congressional Republicans actually give a damn about funding the CHIP program, they actually shot down a request to fund CHIP separately just last night (Sen. Debbie Stabenow is, of course, a Democrat):

Just now, @SenStabenow tried to move to fund CHIP and community hospitals off from the full spending bill. McConnell objected - said Dems could allow the CR to move forward.

In any event, here's how many children were enrolled for at least part of the year in 2016 (2017 data not available yet, but even McConnell seems to agree that it's still at least 8.9 million) and the ~690,000 young adults currently estimated to have DACA ("Dreamer") status as of January. To estimate the current DACA numbers, I took the hard data from March 2017 (around 745,000 approved renewals at the time) and knocked about 7% off to get 690,000, which seems to be the current national total accepted by all parties. Obviously these numbers could be a bit higher or lower for different states, but just as with CHIP numbers, they should be pretty close to the mark: 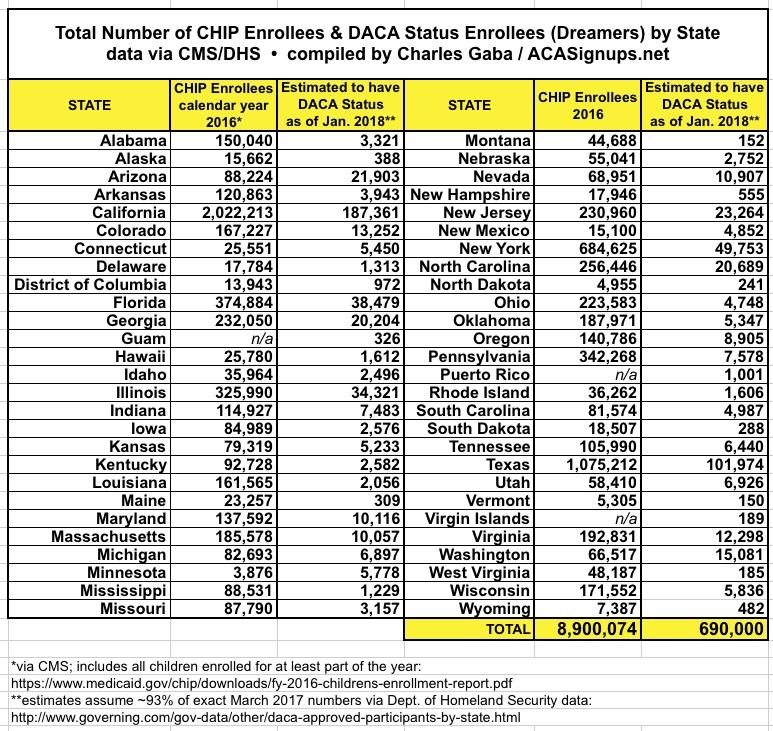 UPDATE: I'm reminded of this classic monologue by Colonel Kurtz at the end of "Apocolypse Now":

I remember when I was with Special Forces. Seems a thousand centuries ago. We went into a camp to inoculate the children. We left the camp after we had inoculated the children for polio, and this old man came running after us and he was crying. He couldn't see. We went back there and they had come and hacked off every inoculated arm. There they were in a pile: a pile of little arms. And I remember I...I...I cried. I wept like some grandmother. I wanted to tear my teeth out. I didn't know what I wanted to do. And I want to remember it. I never want to forget it. I never want to forget.

And then I realized, like I was shot — like I was shot with a diamond...a diamond bullet right through my forehead. And I thought: My God, the genius of that. The genius! The will to do that: perfect, genuine, complete, crystalline, pure. And then I realized they were stronger than we, because they could stand it. These were not monsters. These were men, trained cadres — these men who fought with their hearts, who had families, who have children, who are filled with love — but they had the strength — the strength! — to do that. If I had ten divisions of those men our troubles here would be over very quickly. You have to have men who are moral and at the same time who are able to utilize their primordial instincts to kill without feeling, without passion, without judgement. Without judgement! Because it's judgement that defeats us.