Most states chose the "Silver Load" option, putting all of their chips into Silver plans only (both on & off exchange) to limit the CSR hit to fewer people, while actually improving the situation for most subsidized enrollees and at least neutralizing things for Bronze and Gold unsubsidized enrollees.

Some states are going one step further and implementing the "Silver Switcharoo" gambit, which concentrates the CSR surcharge even further (limiting it to on-exchange Silver only). Normally this would make things even worse for unsubsidized Silver enrollees, but these states are also either promoting existing (or creating brand new) off-exchange Silver plans for those folks to hopefully switch to in order to avoid the CSR hit (of course, they can also upgrade or downgrade to Gold/Bronze to avoid it as well).

Finally, a few states are sort of all over the place, with different carriers using different strategies; I haven't a clue how that will play out in the real world.

Anyway, yesterday morning the breakout appeared to be:

Since then, however, two states have changed their status, and a third is actively scrambling to change course to...something else, but they're not sure what yet:

...About 356,000 people in Illinois bought an exchange plan in 2017. Nearly two-thirds of purchasers bought a silver plan. Of those, 32,000, or 14 percent, did so without aid, a group that now will pay a surcharge. In 2016, insurers here received about $163 million in cost-sharing subsidies, according to an Associated Press analysis.

That 32,000 figure is actually likely down to around 24,000 by now due to net attrition, but otherwise this is a great explainer of the policy. From the article, it actually sounds like they were planning on going the Switcharoo route all along, and I was simply misinformed about their previous status.

BOSTON, MA — The Massachusetts Health Connector announced last week it would use the lower of two rate sets for some of its plans, but President Donald Trump's decision hours later to end certain federal insurance subsidies means the Connector will use the higher rates after all.

With uncertainty still prevalent about the federal health care landscape, the Health Connector and Division of Insurance had prepared two sets of rates for its 2018 plans, including one featuring bigger rate increases that accounted for the possibility the federal government would stop making monthly payments to insurers known as cost-sharing reduction (CSR) payments.

Last Thursday, they announced they would use their standard rates -- meaning an average premium increase of 10.5 percent for as many as 80,000 consumers -- and form a contingency plan in case the CSR payments were cut off.

But a late-night announcement from the White House that same day brought word that Trump would end the payments. The Connector said Friday it would consider "alternative pathways" but officials announced Thursday they are uploading the higher rates.

The move to the higher rates -- which will bring premium increases of about 26 percent to the affected members -- was disclosed Thursday in a letter Gov. Charlie Baker sent to the state's Congressional delegation, informing them of happenings at the Connector and asking them to support a bipartisan health care bill developed by Sens. Lamar Alexander and Patty Murray.

..."However, the lack of affirmative congressional action requires the Connector to load into its system adjusted rates for open enrollment that take into account increased premiums to cover the loss of CSRs," Baker wrote. "Today, the Connector will be loading these adjusted 2018 premiums, which are higher than 2017 rates by an average 18 percent above the expected 8 percent increase, into its system."

Also worth noting: The requested rate increases for the Bay State averaged around 6.9% with CSRs paid or 24.4% if they weren't. It sounds like the approved rates would have been 8% with CSR payments but will instead be 18% overall (presumably around 8% for Bronze, Gold and Plantium vs. 26% for Silver plans)

Members who will be affected by the 26 percent premium increases are those are enrolled in silver tier ConnectorCare plans whose coverage is not subsidized by the tax credit, according to the Connector.

...Baker said some Connector members "will be protected from these increases," because of offsetting tax credits, but up to 80,000 people "are not eligible for premium tax credits and will face the full impact of these premium increases."

..."We are implementing a full-scale member communication campaign that starts immediately and will continue through Open Enrollment, which begins on November 1st, and we encourage members to shop around for the best plan for individuals and their families," Lefferts said.

Public Hearing to be held Monday, October 23rd in Baltimore

​BALTIMORE — Maryland Insurance Commissioner Al Redmer, Jr. will hold a public hearing on health insurance companies’ proposed amended premium rates for 2018 health insurance plans in the individual non-medigap market. This quasi-legislative hearing, scheduled from 9 am – 11 am on Monday, October 23, 2017 at the Maryland Insurance Administration’s office will focus on plans sold to individuals. Plans can be bought direct from the carrier, through a producer or via the Maryland Health Connection. Two carriers offer plans in this market: CareFirst and Kaiser. The rates for the small group market have not been amended.

“In light of the recent announcement that cost-sharing reduction payments would be eliminated, we have been busy taking a look at the impact on individual health insurance rates approved in August. We have asked the carriers to submit amended rate filings for these plans and we want to have a public forum to discuss the amended rate filings with all of the key stakeholders,” said Commissioner Redmer. “We want to take into consideration all stakeholder perspectives before we make any final decisions. As regulators, we cannot allow insurers to sell a product below the amount needed to sustain their business nor can the rates be discriminatory or excessive. Our highest priority is protecting Maryland consumers impacted by this change.”

I applaud Commissioner Redmer for his devotion to full public input and transparency, seriously I do. However...talk about last minute! October 23rd is just 9 days before the 2018 Open Enrollment Period actually launches.

As Dave Anderson has pointed out, Maryland operates their own state-based ACA exchange, so I presume they have a better idea than I do about how much time/effort would be required to swap out the "no CSR load" rates for the "CSR load" rates regardless of which strategy they pursue, but man this is cutting it close.

I certainly hope that they end up going the full Silver Switcharoo route, however.

In Maryland, the insurance commissioner meeting is supposed to be happening even as I'm typing this. While it's possible that the final ruling will be different, both Hannah Recht and David Anderson seem pretty confident that they are indeed going the Silver Switcharoo route after all, hooray! 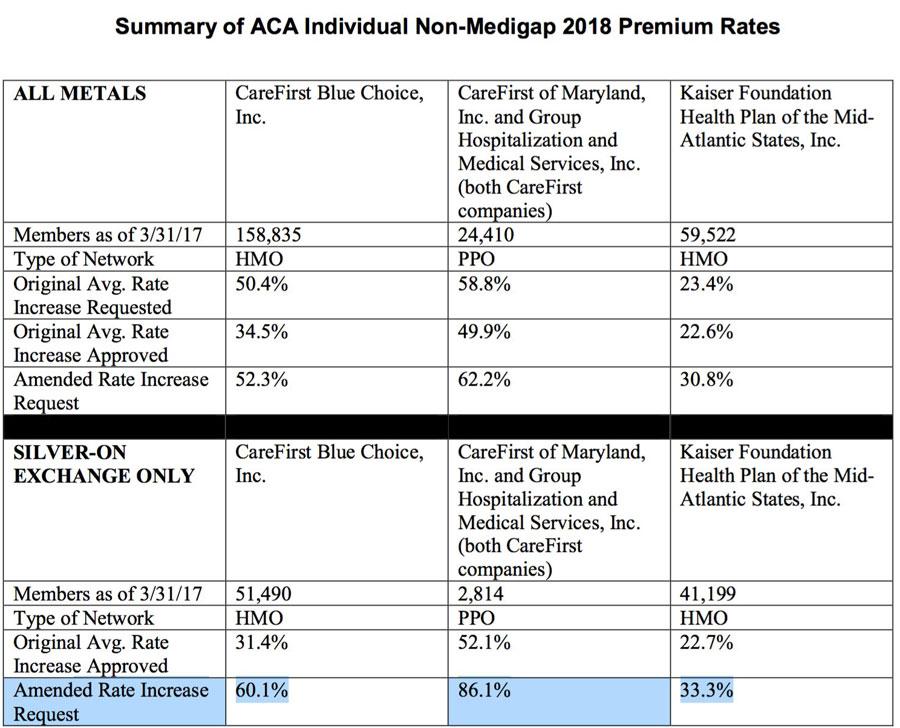 So they ARE going full #SilverSwitcharoo?

Nothing’s official til it’s official...but yeah this is from the DOI

The status for both states has been changed on the spreadsheet.

UDPATE 10/23/17: Good news! Looks like Utah has been upgraded from "Silver Load" to "Silver Switcharoo":

.@LouiseNorris @charles_gaba @bjdickmayhew Hey all, I think you have #UT incorrectly as Silver load, when we are actually Silver Switcharoo

I didn't understand diff between Silver load and Switcharoo until now - #UT is Switcharoo based on Insurance Dept, and off-mkt comparisons

UPDATE 10/24/17: Good news out of Virginia: Louise Norris confirms over at healthinsurance.org that 5 out of 7 of Virginia's individual market carriers are going full Silver Switcharoo, while the other two are at least Silver Loading. Since the main definition of the Switcharoo strategy is for unsubsidized silver enrollees to have at least some viable off-exchange silver options without the CSR surcharge, this is close enough to make their status "Switcharoo".

In addition, I've confirmed that Wisconson is definitely going full Silver Load (and may possibly be Switcharoo, though I have to hear back from the DOI to confirm).

I've also confirmed that Alabama, which we thought was only Silver Loading, is definitley going the full Switcharoo route. There's only one carrier on the individual market in Alabama anyway (no, "Freedom Life" doesn't count), and unlike some carriers, BCBSAL broke out their filings into multiple categories for different metal levels. They have three different Silver filings listed, two available on exchange, on available off exchange only...and it's pretty obvious that they're only loading the CSR cost onto the on-exchange Silver plans, with the off-exchange Silver coming in at the same nominal 3.5% increase which is typical of the other Bronze and Gold plans: 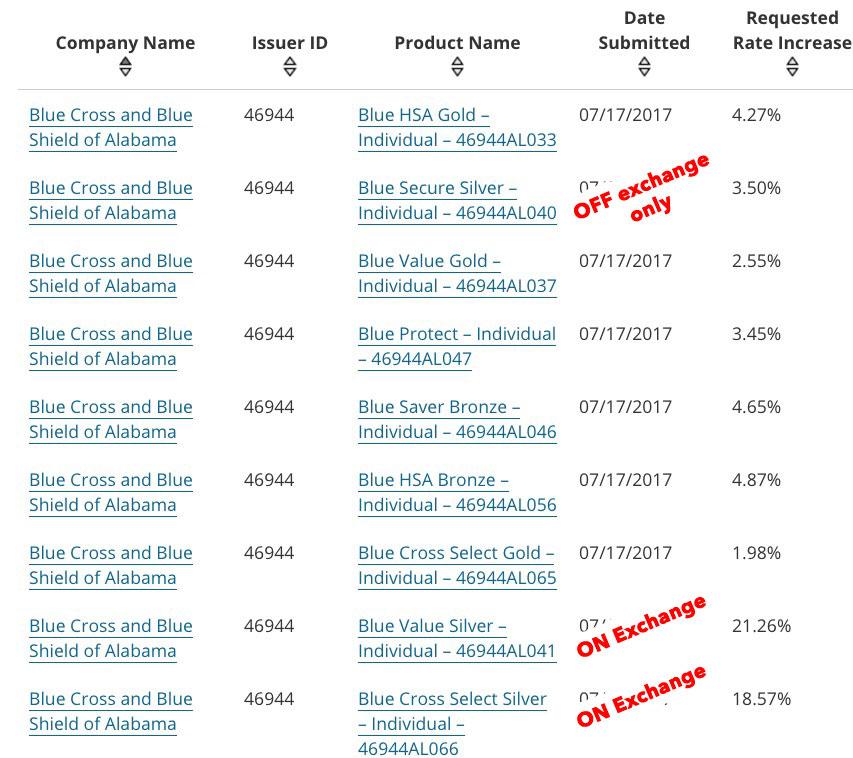 UPDATE 10/24/17: OK, it looks like both Wisconsin and Wyoming are actually going full Silver Switcharoo, while Kentucky appears to have been miscategorized as "Broad Load" when in fact it's going Silver Load.

UPDATE 10/25/17: A Maine-based healthcare consultant says that Maine is actually going full Swilver Switcharoo as well. David Anderson has confirmed this via the following notice at the Maine insurance dept. website.

This brings the status tally to: