OK, so what about 2018 plans? Well, I've been touting these graphics for some time now, with the average bobbling between 29-30% depending on how many states I had baked into the total and whether I was including requested rate increases or approved ones: 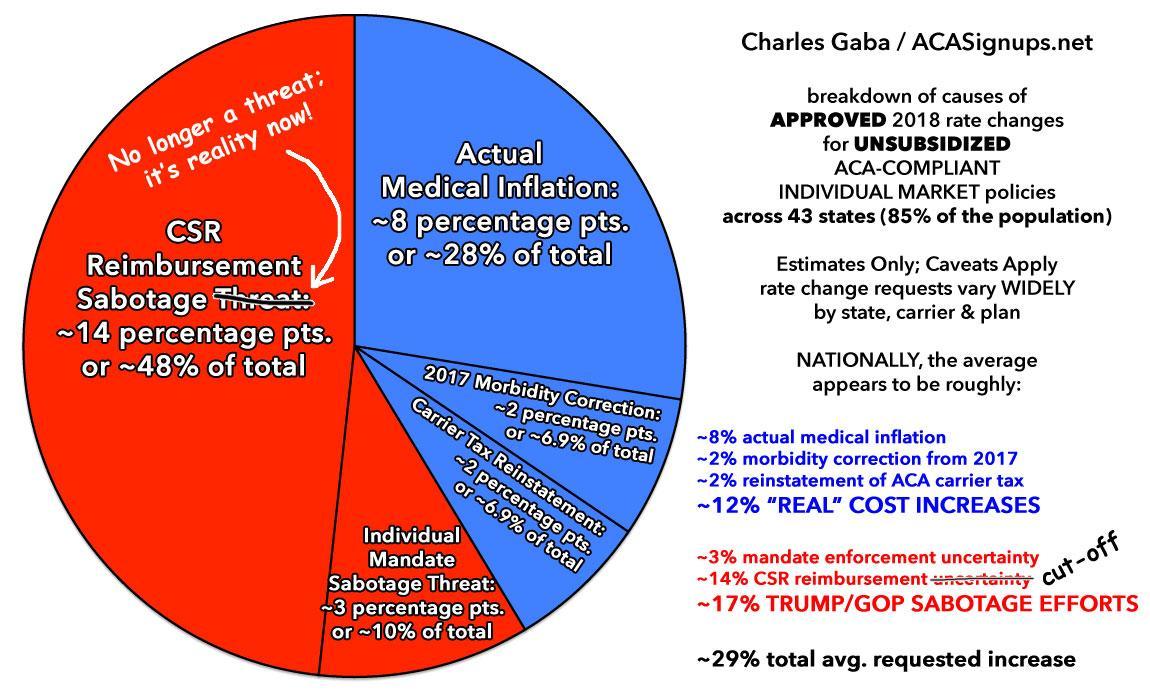 Of course, there's still 8 states missing, including one big one (Texas)...but I decided to plug in the requested rate hikes for all 8 of them to see what that does to the average...and it ends up barely moving the needle: 29.5% overall. Texas, Iowa, Missouri and Wyoming pushed the national average up about a full percentage point, but Alabama, Oklahoma and a couple other smaller states knocked it back down a bit, with Hawaii and New Hampshire hovering around 30% anyway.

OK, so today, healthcare consulting firm Avalere Health published their own big analysis of the 2018 rate increases, and concluded with the following:

New analysis from Avalere finds that the 2018 exchange market will see silver premiums rise by an average of 34%. According to Avalere’s analysis of filings from Healthcare.gov states, exchange premiums for the most popular type of exchange plan (silver) will be 34% higher, on average, compared to last year.

“Plans are raising premiums in 2018 to account for market uncertainty and the federal government’s failure to pay for cost-sharing reductions,” said Caroline Pearson, senior vice president at Avalere. “These premium increases may allow insurers to remain in the market and enrollees in all regions to have access to coverage.”

Avalere experts attribute premium increases to a number of factors, including elimination of cost-sharing reduction (CSR) payments, lower than anticipated enrollment in the marketplace, limited insurer participation, insufficient action by the government to reimburse plans that cover higher cost enrollees (e.g., via risk corridors), and general volatility around the policies governing the exchanges. The vast majority of exchange enrollees are subsidized and can avoid premium increases, if they select the lowest or second lowest cost silver plan in their region. However, some unsubsidized consumers who pay the full premium cost may choose not to enroll for 2018 due to premium increases.

OK, so I was off by 5 points (29% vs. 34%); close but not as accurate as prior years, right? Fair enough; it's a crazy year, rate requests/approvals have been changing constantly, etc, so I should feel pretty good about this anyway.

But hold the phone a minute: Note that the Avalere summary specifies Silver plans, not all ACA policies. What happens when you add in Bronze, Gold and Platinum?

Well, if you look at the state-by-state analysis, you'll see the breakout is actually as follows:

Now we need to figure out what portion of ACA policies each metal level has. Fortunately, that's available to us here: CMS's 2017 Open Enrollment Public Use Files!

If you download the zip file, pop it open in Excel and move to the 7th tab, you'll see the 2017 Open Enrollment breakout by Metal Level:

Percentage-wise, that breaks out as:

So, when you apply those ratios to the average rate hike which Avalere came up with, what do you get?