UPDATE 10/13/17: Welp. Trump officially lowered the boom on cutting off CSR reimbursement payments last night, so CSR sabotage is no longer a threat, it's a reality (unless there's a court injunction or the GOP-held Congress actually gets off their asses and formally appropriates the payments with a simple, 87-word bill).

California has the largest total population, the largest total individual insurance market (on & off-exchange combined) and the 2nd largest on-exchange population (after Florida) in the country. It was therefore no surprise to me that adding their unsubsidized average 2018 rate hikes to the other states I've already analyzed would move the needle significantly.

Until today, I had plugged in the numbers for 30 states representing around 54% of the country. The average rate increase ranged from as low as a 26% drop in Alaska (thanks to their new reinsurance program) to as high as an ugly 57% in Virginia, but collectively averaged around 14% not including the two most obvious ACA sabotage measures whipped up by the Trump administration (threatening CSR reimbursements and enforcement of the individual mandate), or around 34% with both of those factored into the mix.

Today, however, I added four more states: Kansas, Nebraska, West Virginia...and California. The first three only have 6.6 mllion residents between them, and two of the three have rate increase averages fairly close to the other 30 states anyway...but California has over 39 million people, and their rate increases are considerably lower both with and without the CSR factor (12.3% and 16.6% respectively). As a result, with 34 states covering 69% of the total U.S. population, the national averages have dropped several points in both scenarios, to ~12% with neither sabotage factor, ~16% with the mandate enforcement threat included, and ~30% when the CSR threat is added in as well.

There are still 16 states (+DC) missing. Of them, Texas, Pennsylvania and New Jersey are the only ones which would likely impact the national average. Assuming those states end up similar to the rate changes requested by carriers in each, it'll probably knock the average down slightly more...but the other dozen or so states might nudge it back up again. In the end, I still suspect what you see below will be pretty close to the final average once the dust settles: 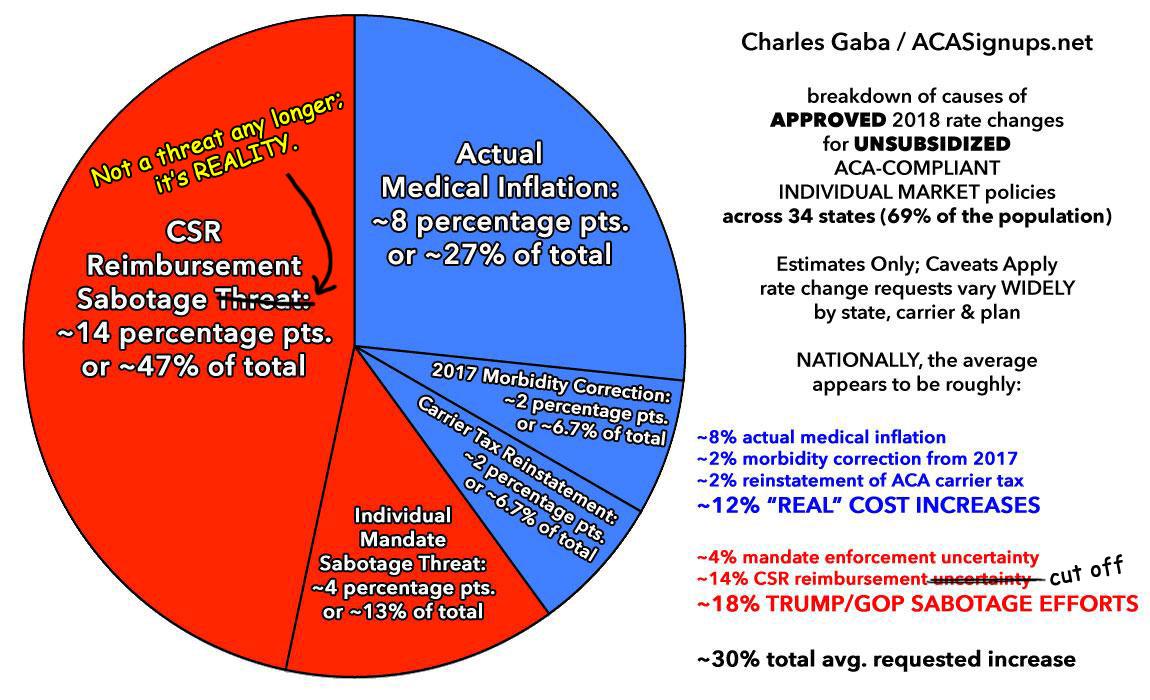