The Absurdity of the Hyde Amendment: Some back-of-the-envelope math

...The 2016 platform marked the first time the Democratic platform had an explicit call to repeal the Hyde Amendment. On January 24, 2017, the House of Representatives passed H.R. 7, which, according to the press office of Speaker Paul Ryan, "makes the Hyde amendment permanent."

Yesterday I added a sickening update to an already depressing entry from over three years ago about how thanks to the Hyde Amendment, combined with the misogynistic mindset of state legislators has created a horrifying Catch-22 situation for hundreds of Michigan women every year:

the state “opt-out” rider law clashes with provisions of the Affordable Care Act, which outlaws both separate riders and any government subsidy of abortion. Under federal law, insurers cannot offer a rider to a standard, inclusive policy. And the new state law bars insurers from including elective abortion coverage in any policy, on or off the exchange.

...Michigan's Republican "Rape Insurance" law means that around 220 rape victims will be PENALIZED for the "crime" of being raped every year by either:

a) having to pay a $500 fine and undergo a painful, emotionally revolting surgical procedure, OR

b) having to undergo a minimum of 9 months of cruel & unusual punishment.

I dusted off this entry the other day due to a revolting story just posted in the Detroit News:

A Sanilac County Circuit judge has granted parenting time and joint legal custody of an 8-year-old boy to a convicted sex offender who allegedly raped the child’s mother nine years ago.

...[Judge] Ross disclosed the rape victim’s address to Mirasolo and ordered Mirasolo’s name to be added to the child’s birth certificate — all without the victim’s consent or a hearing, according to Kiessling.

...Kiessling said her client was notified she was “not allowed to move 100 miles from where she had been living when the case was filed, without court consent.”

...According to Kiessling, Mirasolo forcibly raped and threatened to kill her client, now 21, nine years ago when the woman was 12. Mirasolo was 18 when the incident occurred in September 2008.

I've stopped my blood from boiling over this madness long enough to look at a different aspect of the interaction between the Hyde Amendment and the ACA in a more cold-hearted, actuarial manner. Yesterday Rebecca Stob, a health insurance actuary in Washington State who wrote a guest post here a few years back brought my attention to the following:

On October 6, 2017, the Center for Consumer Information and Insurance Oversight (CCIIO) released a new bulletin regarding the coverage of abortion by qualified health plans (QHPs) sold through the ACA marketplaces. The bulletin provides additional guidance on how rules and restrictions on abortion coverage will be enforced by federal officials beginning in plan year 2018.

Coverage of abortion was one of the most contentious and last resolved issues in the debate over the ACA. The final Senate compromise, which was adopted as part of the ACA, largely reinforces the Hyde Amendment, which has been included in annual Congressional appropriations legislation since the 1970s and prohibits the use of federal funds for abortion services unless the pregnancy is a result of rape or incest, or would endanger the woman’s life (non-Hyde abortions).

...and so on. This seems to have Mike "Handmaid's Tale is a Guidebook" Pence's fingerprints all over it, but whatever.

In any event, Ms. Stob's follow-up tweet about this development caught my eye:

...and got me to thinking about how absurd this situation is. Insurance carriers have to take $1/month ($12/year) of the premium paid by each and every person enrolled in an abortion-covering exchange policy and deposit it into a completely separate bank account. There the money sits, quarrantined from all the other premium revenue collected by the carrier, until the day that one of those enrollees happens to put in a claim to cover an abortion.

I idly inquired just how much/little of this $12/year is actually being spent on such claims, and only received a vague guesstimate from another Twitter friend, so I decided to see if I could run the numbers myself. Here's what I came up with:

(NOTE: the data below has been reworked since this morning thanks to this additional clarification data from the Kaiser Family Foundation...but the end numbers are only slightly different from my original calculations)

Let's start with the 6 states in which which require all (or nearly all) exchange policies cover abortion. Here's a table listing the official Open Enrollment Period QHP selections for 2014, 2015, 2016 and 2017:

Remember that these numbers only show how many people had signed up for exchange policies in those states as of the end of Open Enrollment each year; due to churn and attrittion, the average number of enrollees each month is somewhat lower...around 68% in 2014 (due to Open Enrollment not actually ending until April 15th) and around 80% every year since:

Next: How much premium revenue from those policies has gone into the "abortion funds" each year? That's easy: $1/month per enrollee x 12:

That should be a grand total of around $79.2 million across these six states as of December of this year.

Now comes the harder part: Just how many women enrolled in these policies have actually had abortions performed and paid for out of these accounts? According to the official 2017 Open Enrollment Report from CMS, exchange enrollees skew female, 54% to 46% male. That's only for the 39 states on HealthCare.Gov, but I'll assume it's a similar ratio in the other 12 states as well.

Next, of those 54% female enrollees, how many are of "child-bearing years" (15-44)? (And yes, I'm sickeningly aware that the rape victim in the article linked to above was only 12 years old at the time). That's a bit tricky; the demographic breakout of the data set provided by CMS doesn't group the age brackets that way, but eyeballing this indicates that it should be something like 45% of all enrollees between 15-44:

That gives the following:

How many of them have had an abortion? According to the Kaiser Family Foundation, here's the state-by-state ratios per 1,000 women in that age range. They don't include California, but I'm assuming it's somewhere in between the other three, which range from 1.1% to 2.4%. Overall, I estimate it's around 1.9%:

Finally, how much was actually claimed to cover the procedures? Well, abortions apparently cost around $500 on average. The vast majority of these policies should be either Silver plans, with the rest being mostly Bronze with a few Platinum thrown in. Let's call it an average of around 70%, or $350 of each procedure being paid for by the carrier:

Yes, that's right: To the best of my calculations, by the end of 2017, carriers in these 4 states will have brought in roughly $79.2 million into these special "abortion funds" but will only have paid out perhaps $10.4 million of it to pay for around 30,000 abortions, leaving over $68 million just sitting in the accounts gathering dust (and interest?). Even if they cover 100% of the procedure, that's still less than $15 million. 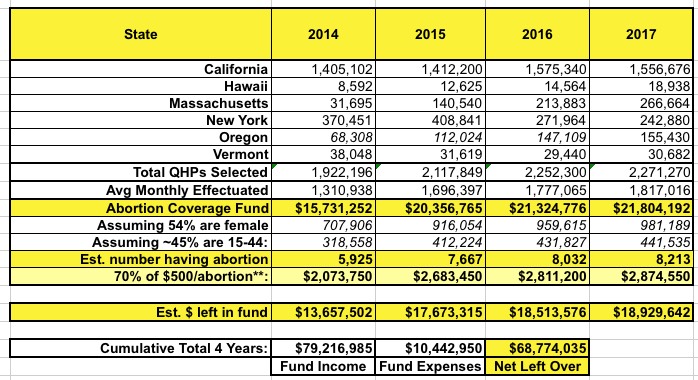 The ACA explicitly states that those remaining funds cannot be used for any other purpose, which means it can't go towards other types of claims...but I also assume it means the carriers can't use it to pay employee salaries, to buy out other companies, as part of an investment portfolio or anything else. It's basically just a checking account.

How about the other states which allow and offer policies which cover abortion? That gets even trickier since I don't know what portion of their exchange enrollees are actually in such plans. I'm going to assume perhaps 50% are enrolled in policies which include abortion coverage and 50% aren't: 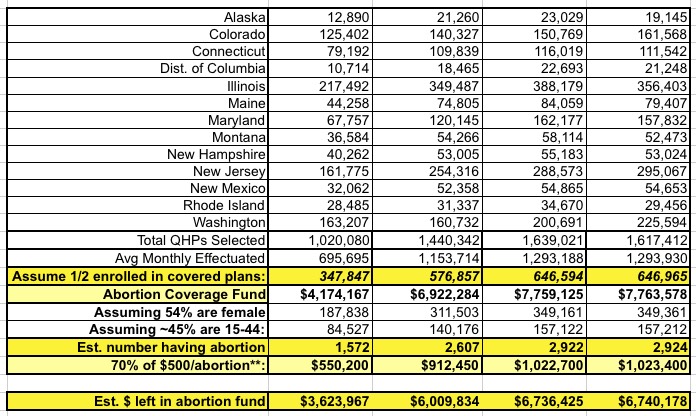 This brings my estimate of the grand total number of women who have had abortions covered by ACA exchange policies to date up to around 40,000 nationally.

Add together all 19 states and it should look something like the following:

And there you have it. Assuming I'm reasonably close with all of this (and I could be way off, I admit), it looks like nationally, individual market carriers have deposited roughly $106 million into "abortion-only" acounts over the past four years but have only paid out perhaps $14 million in abortion claims, leaving them with around $92 million just sitting there gathering dust, untouchable for any other purpose. Assuming the ACA, the Hyde Amendment and everything else stays intact for the next, say, 20 years or so, and assuming that population growth, abortion rates and inflation roughly match each other, that means there could be as much $600 million in those accounts by 2037.

This is stupid. Repeal the Hyde Amendment already.

UPDATE: Twitter follower "Alli Gator" has proposed an interesting potential use for these funds: In states like California which require Medicaid to cover abortions, why not find a way to apply this money towards helping cover them? This particular money is legally required to be used towards abortion procedures exclusively, so it would be doing exactly what it's supposed to, and if it isn't used it literally just sits in an account doing nothing whatsoever.

I've no idea what the legalities involved would be (at best, it could probably only be done at insurance carriers which also already have an MCO contract with the state anyway), but it seems like a reasonable idea to me: Wait until the calendar year has ended and then use any leftover funds in the account towards Medicaid-paid abortions. Just a thought.