OK, Bernie: Tell me what you have in mind for Phase 2.

For the past year and a half, of all the proxy battles between "Team Hillary" and "Team Bernie" on the left side of the aisle, no issue has been more repsentative of both how passionate people are or how much each "side" misunderstands the other than the future of the American healthcare system.

"Team Bernie", in essence, consisted of progressives (and Democrats) who believe that while the ACA may have improved things to some degree in some ways, it not only isn't enough long-term, it isn't nearly enough short-term either; the next step (and for many, the only acceptable next step) must be moving the entire U.S. population over to a universal Medicare-style Single Payer system, with everyone in the country being covered through a single, comprehensive healthcare program funded entirely (or nearly entirely) by taxes.

"Team Hillary", in a nutshell, consisted of Democrats (and progressives/moderates) who want to achieve universal, comprehensive, quality, affordable healthcare coverage for all...but believe that it has to be done in incremental stages. The general philosophy here is that if you try to make too radical a change, impacting too much of the system (i.e., the economy, jobs, logistics, etc.) in one shot, you'll risk either massive political backlash, economic disaster, mass confusion and chaos, or some combination of all three. They see the Affordable Care Act as a major step forward...but not the final step by any means.

As anyone who's followed me knows, I happen to fall into the second category. I've studied this from about every angle I can think of, and have come to two absolute conclusions:

For this, I've been labelled an "incrementalist" by some which I really don't see as an insult, seeing how pretty much every major progressive achievement has happened in a series of stages. I've also been labelled a "neoliberal", a "corporate shill" and so on by others, which is so stupid and offensive that it barely merits an eye roll.

Anyway, the point is that both camps believe in a common end goal...the main difference is the process and timeline each thinks is necessary to get there.

The other major difference...at least depending on who you talk to...is whether the end goal has to be 100% paid for by taxes (i.e., zero out of pocket costs to anyone for anything, which would be a recipe for disaster without extremely tight cost controls), or whether there'd be some level of cost sharing on the part of the enrollee themselves.

I've posted earlier versions of the following pie chart many times before, and the original version even made me a finalist for a national healthcare journalism award. I've updated it to reflect the situation as of Summer 2017 to the best of my ability, including breaking out several additional sub-categories. I've only included the enrollment numbers for the major categories because what's relevant is the complexity of the current system, not the precise number of people in each slice. The three sections labelled in blue (Medicaid Expansion, Subsidized Exchange, Basic Health Program) more or less represent the ~21 million people who have gained coverage since 2013: 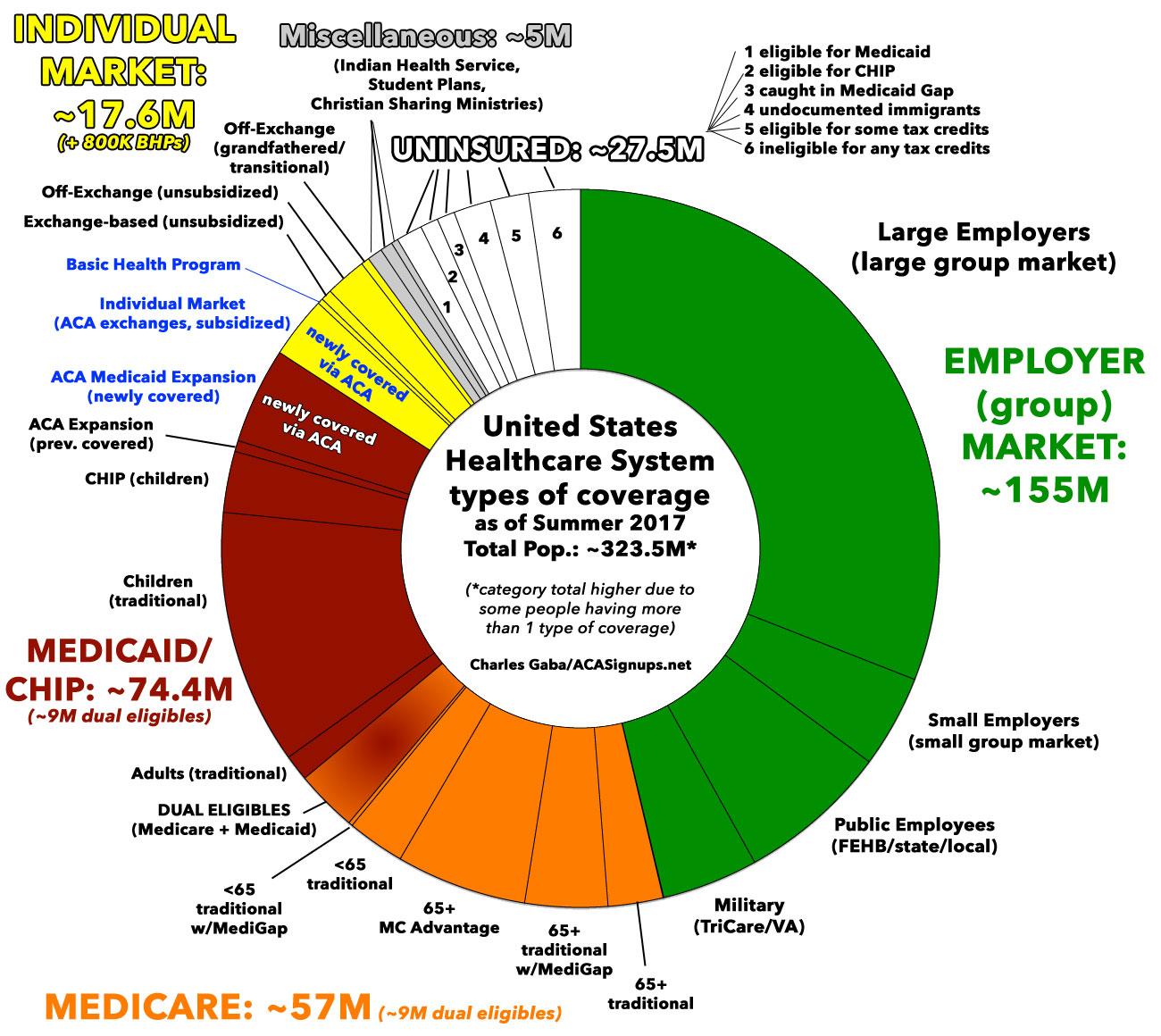 OK, that's where things stand as of right now. The above chart doesn't delve into the quality, cost or comprehensiveness of any of the different types of coverage, mind you; just the type of coverage people have.

Now, here's what the "Medicare for All" plans envisioned by both John Conyers' HR676 bill (in the House) and Bernie Sanders' "Full Plan" (from the primary campaign last year) would look like if taken literally/at face value: 100% Comprehensive, 100% Actuarial Value, 100% Publicly Funded, $0 Out of Pocket Cost: 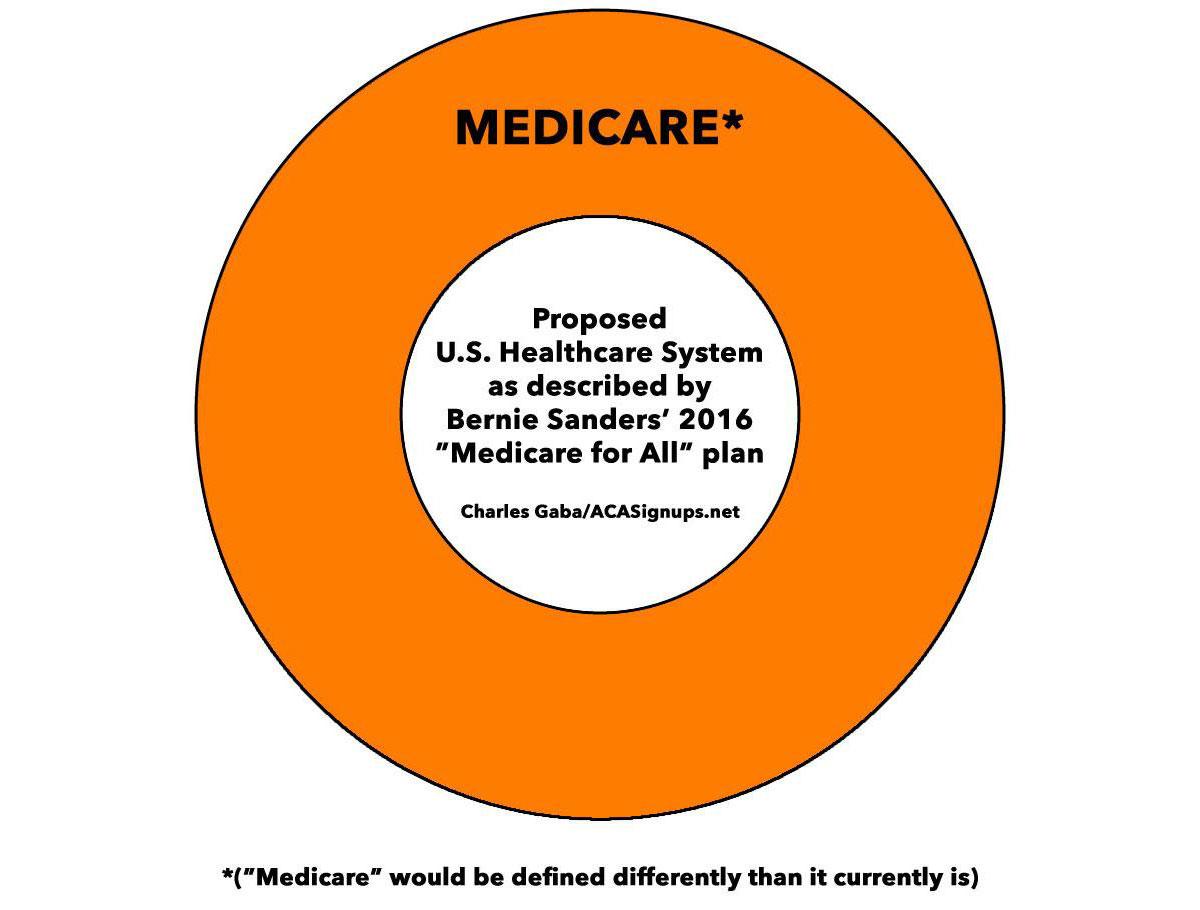 Notice that I've put "Medicare" in quotes in the second graph, because the type of coverage that both Conyers and Sanders are talking about would be very different from the current definition of Medicare, which is not comprehensive, does include premiums, co-pays & deductibles and does include caps on coverage for some services.

Now, when Bernie released his "Medicare for All" plan a year and a half ago, most critics focused on the cost of such a program...that is, how much it would cost and how we would pay for it. In my own critique, I didn't even get to that part of it, because I was far more focused on the logistics of making such a massive transition. Bernie's "full" plan (his description, not mine) was literally 4 pages long once you remove the 3 page "history of healthcare in America" part. About half of that broke out his proposed funding mechanism (types/amounts of taxes, etc), while the other half...just two pages of text...described the plan itself, which basically amounted to: Everyone will be covered for everything at zero out of pocket cost, period.

Now, I recognized that this was designed purely for running his primary campaign, so no, I wasn't expecting a 50-page detailed wonkfest with actual legislative language...but I was shocked that it didn't include some level of detail beyond "everyone will be covered for everything at no OOP cost", which I could have written in the third grade.

Keep in mind that this isn't some side issue for Bernie, and he's not wet behind the ears. He's been either a U.S. Congressman or U.S. Senator for 27 years, and single payer healthcare was supposed to be one of the cornerstones of his entire campaign which he's been lecturing about for decades, so I was severely disappointed that his "FULL plan" (again, his words, not mine) was absurdly skimpy on the details, even for a general overview.

By contrast, of course, Hillary Clinton's healthcare plans during the primary (and general) campaign may not have been nearly as bold, but at least you had a pretty good idea of what they were and how they would work. If anything, she was criticized for being too wonky, getting overly bogged down in the details (to be clear: I had no problem with this, but lord knows most people did).

In any event, tomorrow (Wednesday), a year and a half later, Bernie's supposed to be releasing his FULL, "Full Plan", presumably including answers to all (or at least most) of the issues I posted above.

If it does, then the next question will become "how FEASIBLE is this plan", not just politically but also economically, logistically, and so on.

It'll be interesting to see what Bernie presents as his "Phase 2" plan to get us from the first chart above to the second in a single, all-encompassing bill. I presume that underpants are not involved.