FLASHBACK: Here's Bernie's PRIOR "Medicare for All" plan.

According to several sources, Bernie Sanders plans on releasing a new "Medicare for All" plan in the next week or two.

In light of this, I thought it might be a good idea to remember his last such plan, introduced back on January 18, 2016 in the midst of his heated primary battle with Hillary Clinton.

If you visit BernieSanders.com and click on the "Issues" tab today, you can still find his official 2016 campaign "Medicare for All" plan, without a single word changed.

It's important to note that while Bernie's plan as presented on his website was not actual legislative text, it was, in his own words, the "FULL plan"...that is, this wasn't supposed to be a "summarized" version or an "overview", but literally "the FULL PLAN", as the link leading to it clearly states twice: 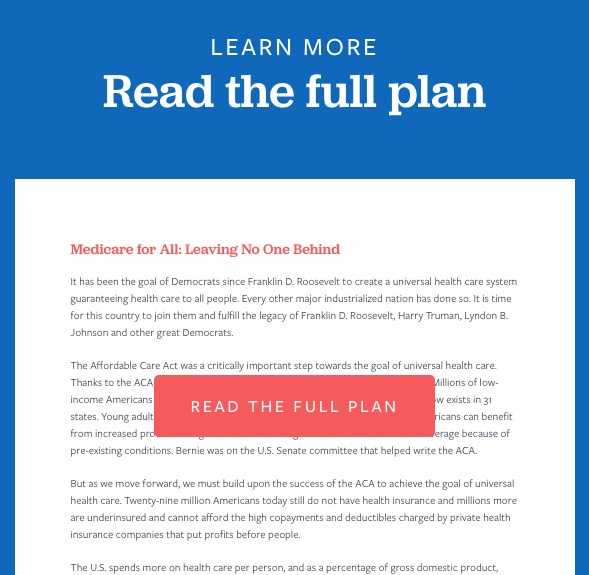 The first 690 are merely a review of the history of healthcare policy in America and a summary of the plan itself. Subtract that and "The FULL Plan" itself is just 1,019 words, or 4 pages total.

468 words of that are devoted to "How to pay for it", leaving just 551 words to describe the actual plan itself. Just over two pages of text to describe a plan which is supposed to fundamentally overhaul 1/6th of the entire U.S. economy.

It'll be interesting to see how it compares with whatever he comes out with in the next few weeks.

I wrote plenty about his 2016 plan last year, and lord knows it caused me no end of grief, so I'll leave it at that for now. In addition, Jeff Stein of Vox.com just wrote up a good piece exploring Rep. John Conyers' HR 676 single payer bill, which I plan on writing something up about this week as well, and of course there's also Sen. Brian Schatz's "Medicaid Buy-In" idea, so I might as well start pulling all of them in together.

Medicare for All: Leaving No One Behind

The Affordable Care Act was a critically important step towards the goal of universal health care. Thanks to the ACA, more than 17 million Americans have gained health insurance. Millions of low-income Americans have coverage through expanded eligibility for Medicaid that now exists in 31 states. Young adults can stay on their parents’ health plans until they’re 26. All Americans can benefit from increased protections against lifetime coverage limits and exclusion from coverage because of pre-existing conditions. Bernie was on the U.S. Senate committee that helped write the ACA.

But as we move forward, we must build upon the success of the ACA to achieve the goal of universal health care. Twenty-nine million Americans today still do not have health insurance and millions more are underinsured and cannot afford the high copayments and deductibles charged by private health insurance companies that put profits before people.

The U.S. spends more on health care per person, and as a percentage of gross domestic product, than any other advanced nation in the world, including Australia, Canada, Denmark, France, Germany, Japan, New Zealand and the United Kingdom. But all that money has not made Americans healthier than the rest of the world. Quite simply, in our high-priced health care system that leaves millions overlooked, we spend more yet end up with less.

Other industrialized nations are making the morally principled and financially responsible decision to provide universal health care to all of their people—and they do so while saving money by keeping people healthier. Those who say this goal is unachievable are selling the American people short.

Under Bernie’s plan, Americans will benefit from the freedom and security that comes with finally separating health insurance from employment. That freedom would not only help the American people live happier, healthier and more fulfilling lives, but it would also promote innovation and entrepreneurship in every sector of the economy. People would be able to start new businesses, stay home with their children or leave jobs they don’t like knowing that they would still have health care coverage for themselves and their families. Employers could be free to focus on running their business rather than spending countless hours figuring out how to provide health insurance to their employees. Working Americans wouldn’t have to choose between bargaining for higher wages or better health insurance. Parents wouldn’t have to worry about how to provide health insurance to their children. Americans would no longer have to fear losing their health insurance if they lose their job, change employment or go part-time. Seniors and people with serious or chronic illnesses could afford the medications necessary to keep them healthy without worry of financial ruin. Millions of people will no longer have to choose between health care and other necessities like food, heat and shelter, and will have access to services that may have been out of reach, like dental care or long-term care.

Simply put, Bernie’s plan will provide all Americans with the sense of freedom and peace of mind that comes from knowing you always have access to the health care you need.

Bernie’s plan would create a federally administered single-payer health care program. Universal single-payer health care means comprehensive coverage for all Americans. Bernie’s plan will cover the entire continuum of health care, from inpatient to outpatient care; preventive to emergency care; primary care to specialty care, including long-term and palliative care; vision, hearing and oral health care; mental health and substance abuse services; as well as prescription medications, medical equipment, supplies, diagnostics and treatments. Patients will be able to choose a health care provider without worrying about whether that provider is in-network and will be able to get the care they need without having to read any fine print or trying to figure out how they can afford the out-of-pocket costs.

WHAT IT MEANS FOR PATIENTS

As a patient, all you need to do is go to the doctor and show your insurance card. Bernie’s plan means no more copays, no more deductibles and no more fighting with insurance companies when they fail to pay for charges.

GETTING HEALTH CARE SPENDING UNDER CONTROL

We outspend all other countries on the planet and our medical spending continues to grow faster than the rate of inflation. Creating a single, public insurance system will go a long way towards getting health care spending under control. The United States has thousands of different health insurance plans, all of which set different reimbursement rates across different networks for providers and procedures resulting in high administrative costs. Two patients with the same condition may get very different care depending on where they live, the health insurance they have and what their insurance covers. A patient may pay different amounts for the same prescription depending solely on where the prescription is filled. Health care providers and patients must navigate this complex and bewildering system wasting precious time and resources.

By moving to an integrated system, the government will finally have the ability to stand up to drug companies and negotiate fair prices for the American people collectively. It will also ensure the federal government can track access to various providers and make smart investments to avoid provider shortages and ensure communities can access the providers they need.

MAJOR SAVINGS FOR FAMILIES AND BUSINESSES

Bernie’s plan will cost over $6 trillion less than the current health care system over the next ten years.

The United States currently spends $3 trillion on health care each year—nearly $10,000 per person. Reforming our health care system, simplifying our payment structure and incentivizing new ways to make sure patients are actually getting better health care will generate massive savings. This plan has been estimated to save the American people and businesses over $6 trillion over the next decade.

The typical middle class family would save over $5,000 under this plan.

Last year, the average working family paid $4,955 in premiums and $1,318 in deductibles to private health insurance companies. Under this plan, a family of four earning $50,000 would pay just $466 per year to the single-payer program, amounting to a savings of over $5,800 for that family each year.

Businesses would save over $9,400 a year in health care costs for the average employee.

HOW MUCH WILL IT COST AND HOW DO WE PAY FOR IT?

HOW MUCH WILL IT COST?

This plan has been estimated to cost $1.38 trillion per year.

THE PLAN WOULD BE FULLY PAID FOR BY:

ADDENDUM: To be fair, I also dug up then-Senator Barack Obama's 2008 Healthcare Plan Fact Sheet, which only weighted in at 2,600 words (around 2,400 after removing the intro section). However, this particular document was billed simply as a "fact sheet", not his "full plan". In addition, Obama's plan, even the campaign version, never proposed completely overhauling coverage for everyone in the country (employer coverage would be more tightly regulated, but would stay mostly intact; Medicaid would be expanded but not replaced, and so on). I don't know if there was a more detailed version of his plan publicly available during the campaign or not. I'm actually going to write something up on this as well, though, because it should be interesting to compare/contrast his campaign vision against what the final version of the ACA itself ended up looking like.